Drinks giant Coca-Cola Amatil has unveiled plans for $140 million of savings this year, and will reduce capital expenditure by $100 million in response to the economic shock from the coronavirus pandemic.

Coca-Cola unveiled the plans shortly before the Australian market opened on Friday, saying it would also "temporarily" withdraw its dividend payout ratio guidance. 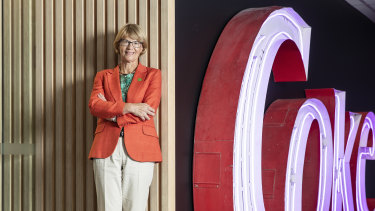 Coca-Cola Amatil boss Alison Watkins says the company’s first quarter of 2020 has been marred by the Australian bushfires and the coronavirus pandemic. Credit:Louie Douvis

The $140 million plus of savings will come from a range of measures including recruitment freezes, reduced marketing expenditure, reduced discretionary spending and a significant reduction in incentives.

"Non-critical projects have been deferred reducing Capital Expenditure for FY2020 from $300 million to $200 million," the company said.

The company revealed that its March quarter EBIT (earnings before interest and tax) had recorded a "mid teen percentage decline" on the March quarter of 2019. But overall sales volumes declined by only a low single digit percentage.

Narrowing in on the period when sales were most heavily affected by COVID-19, the month of March, Coca-Cola said sales volumes were up by a mid-single digit percentage rise on the prior corresponding period as consumers engaged in stockpiling.

But despite the benefits from stockpiling, Coca-Cola's earnings have been hit as the higher margin sales at restaurants, hotels, bars, major sports, concert and entertainment events have been decimated by government restrictions that have closed these venues.

"We entered this crisis with a resilient business model and strong foundations that have enabled us to withstand the immediate challenges presented by the pandemic," said Coca-Cola managing director Alison Watkins.

"Our first quarter of 2020 was highly unusual. We faced the challenges of the Australian bushfires in January and February and in March the adverse impacts of the COVID-19 pandemic started to take effect," she said.

Ms Watkins said the company had reacted swiftly to the crisis, with a comprehensive plan to protect its staff and business.