An embroiderer in Florida is suing her former employer, alleging it did not provide her with paid sick days while she quarantined at home with COVID-19 symptoms and then fired her via text message the day before she was to return to work.

The suit, filed Tuesday by Tracey Graham against Barrier Technologies, appears to be the first over the sick leave provisions in the Families First Coronavirus Relief Act, one of the stimulus bills passed in March to deal with the coronavirus pandemic.

Under the new law, employers with fewer than 500 workers are required to provide up to 80 hours of paid sick time to anyone diagnosed with COVID-19 or under doctor’s orders to quarantine or isolate because of the disease.

That should have applied to Barrier Technologies, a small manufacturer in Davies, Florida, with around 26 employees. The company makes gear like vests, gloves and aprons that protect medical workers from radiation from X-rays and other machines. Graham was paid $14 an hour to embroider company logos and other things onto the gear. On its website, Barrier says it is COVID-19 “compliant” because the material it uses to make gear is made of an antibacterial fabric that is easy to disinfect.

Graham forwarded the doctor’s letter to Barrier’s general email address and received an acknowledgment from Barrier’s vice president of sales, the lawsuit alleges. But the company did not offer to pay sick leave and did not want to bring her back to work, she says. In the suit, filed in U.S. District Court in southern Florida, Graham says that the company owes her sick pay for the time she was at home and that her firing was unlawful.

“They recruit her and the minute she happens to fall victim to the pandemic they kick her out the door. That just seems horrible,” said Parisis G. Filippatos, a partner at the law firm Wigdor who is representing Graham along with Bryan Arbeit, a senior associate at Wigdor. 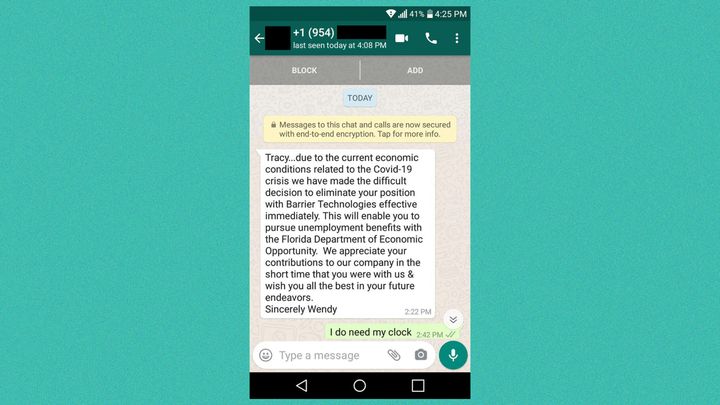 The company said Graham’s firing was due to a loss of business during the pandemic and economic downturn, not her illness.

“We don’t feel we did anything wrong,” the company’s owner and managing director, Marc Glickman, told HuffPost. He said that Graham never told the company she had COVID symptoms, and that she was fired because business is down considerably at his company right now.

Hospitals have canceled elective surgery and aren’t amenable to sales calls right now, Glickman said. The company has taken out a small business loan through the new Paycheck Protection Program, also part of the federal response to the pandemic.

“We didn’t have a choice. It had nothing to do with her ailment,” he said. “Our business was down significantly. We were going to have to let her go. We weren’t happy about it.”

The case may be the first of many disputes between companies and workers as businesses start to reopen in an ailing economy. It also demonstrates how tricky it will be for workers to actually access the sick leave benefits ― already weakened by the White House ― in the coronavirus legislation.

The sick leave provisions in the coronavirus relief law were originally intended to cover the entire workforce and enable people to stay home and avoid infecting others with the virus. Such a provision was deemed critical. Unlike other developed countries, the U.S. has no paid sick leave policy ― a big vulnerability during a pandemic.

Yet the provisions were whittled down by the White House and Senate Republicans at the behest of big business and ended up covering only a small fraction of Americans. If every company took the available exemptions, 83% of the workforce would be left out, according to an estimate from the Center for American Progress, a liberal think tank.

The Department of Labor further weakened the law by making it easier for companies ― particularly health care providers ― to exempt themselves from providing leave. (The bill also includes provisions for a longer-term leave to care for children at home because of school closures.)

Considering all this, it’s fairly remarkable that a case has popped up already.

In fact, Graham did not know at first she was entitled to paid sick leave. She just believed she’d been mistreated by her employer.

“I knew it was wrong. It was something I’d never do to someone else,” Graham told HuffPost.

The company fired her via text message on April 16, the day before she was to return to work. Thankfully her COVID-19 symptoms had been mild ― a sore throat, nausea, fever ― and she was OK to go back.

“Tracy [sic]… due to the current economic conditions related to the COVID-19 crisis we have made the difficult decision to eliminate your position effective immediately,” reads the text sent to Graham.

Graham told HuffPost she was “flabbergasted” by the text. In shock, the only reply she could think of was a message about the pineapple-shaped clock she kept at her workstation. “I do need my clock,” she wrote.

Glick said that after Graham went home sick, she never updated her employer on her condition. They tried reaching her once, he said. “We tried calling her and never heard back and we had no choice but to contact her via text message,” he said.

Graham does not believe that the company was hurting financially. She started looking for a lawyer soon after she got the text.

Graham loved her work as an embroiderer, she said. She learned the skill from her grandmother when she was growing up, splitting her time between Washington state and Alaska, where they stayed in a remote area without running water or electricity.

She was recruited to her job by Glickman and started in February, with $14-per-hour pay and medical benefits after 60 days. She was only there for 34 days, Glickman pointed out. 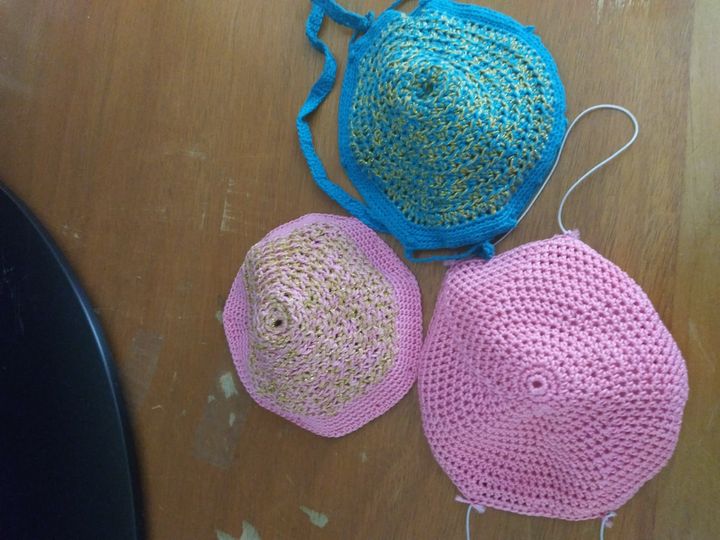 Graham’s attorneys said the firm expects to see more cases like this as more companies open back up and employees start going back to work.

Employers are going to want to cut staff, and it’s inevitable that discrimination allegations will crop up.

In her lawsuit, Graham claims that under the Americans with Disabilities Act, the company should have worked with her on a reasonable accommodation so that she could keep her job.

Right now Graham is managing to get by with some help from her grown sons ― something she can barely talk about without crying.

“That one really does hurt,” she said.

And she also got her stimulus check recently, part of another relief measure enacted to mitigate the losses from COVID-19 shutdowns. She filed for unemployment but, like so many other Florida workers, hasn’t been able to get through to file a claim.

“I don’t know how to not work,” Graham said. “At least I feel like I’m helping somebody.”