Australians’ hunger for pallet-sized packs of toilet paper and other bulk buys drove Costco’s local supermarkets to post a record revenue haul of close to $3 billion in 2021.

The revenue across Costco’s Australian business hit $2.84 billion in the 12 months to August, according to accounts filed with the corporate regulator in late December. Those sales figures represented a 9.6 per cent increase on the $2.59 billion in revenue the group earned the year prior. 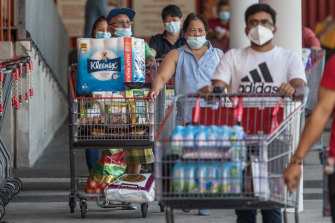 Shoppers stock up at Costco in the Melbourne Docklands before a five-day lockdown. Credit:Jason South

The bump in sales flowed through to Costco’s bottom line with its net profit after tax more than doubling to $46.40 million from $22.22 million a year prior.

The US supermarket group is known for its warehouse format and steep discounts on groceries, clothing and other merchandise that are sold in bulk. The retailer is a membership-only business, meaning shoppers need to be registered members to shop at the store.

From a quiet start in Australia in 2009, Costco has become increasingly popular with shoppers and now has a network of 13 stores across the country. Because its stores sell groceries, Costco remained open during lockdowns unlike many other retailers that were forced to close their doors due to state-government restrictions.

“During the pandemic, the company provided an essential service to the community while prioritising the safety of our employees and members,” Costco’s Australian chairman, Patrick Noone, said.

Increasing Costco’s Australian presence over the year also helped drive up results, Mr Noone said. “The change in profit and loss from ordinary activities before tax is primarily due to an increase in revenue from the additional warehouse and ecommerce business,” he said.

Costco is not the only foreign retailer to have a bumper 2021. Uniqlo and IKEA’s local businesses also had a strong year as Australians took to comfortable clothing and kitting out their home office. Japan’s Uniqlo posted an 11.7 per cent increase in sales over the 12 months to August 31, while the Swedish furniture group posted a 4.5 per cent jump in sales.

The success of large offshore groups comes as local retailers with big store networks have struggled with rolling lockdowns in NSW and Victoria. Wesfarmers said in August that its Kmart and Target brands had recorded a tough start to the financial year (to June 30) with sales falling 14.3 per cent in the first eight weeks of the year. Wesfarmers chief executive Rob Stott told shareholders at the group’s annual general meeting in October that since then, sales have improved at Bunnings and Officeworks but have stayed weak at Kmart and Target.

The results from the overseas headquartered retailers came ahead of the rebound in consumer spending as lockdowns were lifted in NSW and Victoria. October retail trade figures, published by the Australian Bureau of Statistics in the week before Christmas, show turnover had increased 4.9 per cent on a seasonally adjusted basis.