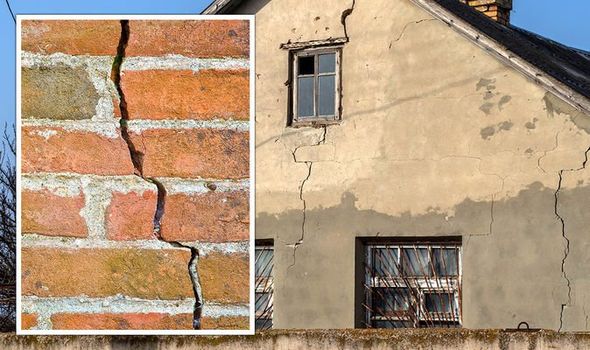 New research from LV= General Insurance (LV= GI) found that 51 percent of homeowners don’t know what subsidence looks like. Worryingly, scorching temperatures and mini heatwaves can actually make homes in the UK more susceptible to the risk of subsidence. Now, LV= GI is urging homeowners to understand what the signs of subsidence look like so that issues can be identified and dealt with as quickly as possible.

Over the last year, the insurance company saw a 49 percent increase in subsidence claims with the larger claims costing around £30,000 and some even reaching in excess of £500,000.

The sudden spike in claims is largely due to the busy housing market in the UK.

More house sales means there has been more building surveys.

Last year also saw the UK experience its third hottest day on record in July along with a heatwave in August.

There was another spike in subsidence claims in 2018 which was believed to be caused by another exceptionally hot year the previous year.

So what are the signs of subsidence?

Subsidence is when the ground beneath your property sinks because the soil is unstable.

A large majority of homeowners do know what subsidence is, however, shockingly, 26 percent said they didn’t do anything at all when they spotted signs of subsidence in their homes.

But despite the majority claiming to know what subsidence is, when quizzed about the signs, some homeowners appeared to have limited knowledge.

Signs of subsidence include large cracks in walls (both interior and exterior), sinking foundations or sloping floors, sinking or dips in pathway or driveway, doors and windows being difficult to open or stocking and wallpaper tearing when there’s no signs of damp.

However, there are many false signs of subsidence that some people wrongly identified.

Tilting large trees outside the home, bulging floorboards, damp patches, mould and a musty smell are not signs of subsidence, according to LV= GI.

Research also revealed that 43 percent of buyers would still consider buying a property with a history of subsidence.

But 29 percent said they would only commit to a property if a building survey confirmed it was safe to inhabit.

A further seven percent, admitted they would simply negotiate a lower price.

Meanwhile, seven percent of buyers said they would still go ahead with the transaction.

The main signs to look out for:

Diagonal cracks near windows and doors that appear to be wider at the top than at the bottom.

If they’re around 3mm thick or more than a 10p coin then it could be subsidence.

Doors or windows stick for no reason, or closing easily in winter but not summer.

Tearing wallpaper not caused by damp.

Clay shrinkage and soil erosion are some of the biggest causes of subsidence in the UK.

These account for over 90 percent of claims, yet over half of the nation’s homeowners (55 percent) don’t actually know what type of soil their home’s foundations are built on.

If your home is built on clay soil, then you need to keep the area around the home hydrated to stop shrinkage and cracking.

Putting down gravel or grass will help this occur naturally without you having to do the work.

Homes on clay will also need to check pipes and drainage systems for leaks.

Martin Milliner, Claims Director at LV= General Insurance said in the summer “intense heat can affect our foundations and lead to subsidence”, especially if your home is built on clay soil.

He added: “Our research has found that many homeowners don’t fully understand the significant signs of subsidence, and we want to help consumers be confident enough to spot them at an early stage.

“It’s also a good idea to carry out any precautions on your home, as making small changes early on can help make a difference.

“From our research, we can also see that a high proportion of homeowners don’t know if their buildings insurance covers subsidence, and I’d encourage them to check so it’s not a potential costly problem in the future.”