Senior Crown Resorts executives approved the transfer of half a million dollars to a Melbourne drug dealer after being told that he was a "good friend" of one of the casino's junket business partners. 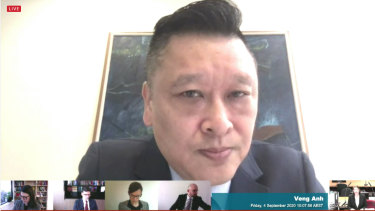 Veng Anh, giving evidence via video link on Friday, said he did not have the authority to question his bosses.

Veng Anh, a senior Crown executive who looked after foreign high rollers at Crown’s Melbourne and Perth casinos, told the inquiry the junket asked him to transfer the last of its funds from Crown after their business partnership ended in late 2016.

When he raised the request with his superiors, Roland Theiler and Jacinta Maguire, Mr Anh said Ms Maguire – Crown's then general manager of international business operations – raised concerns about the transaction because Mr Hu did not appear to have won the money given he had never gambled at Crown Perth and was not a client of Mr Zhou's junket.

Sending money to a third party through a casino is a red flag for money laundering, the inquiry has heard, because it can disguise criminal proceeds as legitimate gambling winnings.

"I just told her … that Nan Hu was a friend of Zhou Qiyun," Mr Anh said. "At the end of the day she had a discussion with Roland and they approved the transaction. But what they discussed, I don’t know."

Crown's transfer of cash to Mr Hu was first revealed by The Age and The Sydney Morning Herald in February as part of a series of reports about Crown's relationships with criminal-linked junkets and which sparked the NSW Independent Liquor and Gaming Authority inquiry.

However, Mr Anh told the inquiry he said he had no direct knowledge of Mr Hu and Mr Zhou’s friendship and took this at the word of one of Mr Zhou’s junket representatives, whose name he could not remember.

Asked by counsel assisting Naomi Sharp if he believed the transaction could be a case of money laundering, Mr Anh said it was "possible", but added that he did not see it as his job to raise such concerns internally.

"It was not within my authority," Mr Anh said. "I rang [Mr Theiler and Ms Maguire] and asked for approval, it was not my role to judge their call."

The inquiry has been told Crown is currently conducting an internal investigation into the transaction and was not aware of Mr Hu's criminal history.

Mr Anh said Crown did not ask him about the incident when it sparked an investigation by the WA gambling regulator in October 2017, and nor had he been been disciplined about the transaction.

The inquiry, which is considering whether Crown is a suitable holder of the licence for its new Sydney casino, will continue public hearings on September 9.