At first glance there doesn’t appear to be an obvious nexus between alleged fresh money laundering claims against Crown Resorts revealed during Monday’s Victorian royal commission and the company’s decision not to redeem $630 million of subordinated notes.

For that matter, most wouldn’t join the dots between Crown’s decision to not pay out its noteholders and claims by the Victorian gaming regulator last week that it was misled by Crown about the arrests of 19 of its China staff back in 2016.

Crown paints a portrait of itself as a now conservative company that wants to maintain its liquidity in the face of the COVID-induced sporadic closures of its venues or changes to their operating conditions. 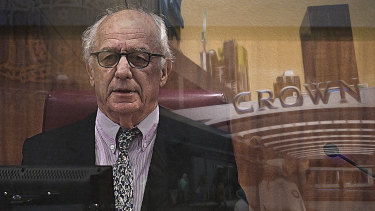 But the reality is that Crown’s financial position is sufficiently unclear that it needs to keep its financial powder dry for a number of contingencies that arise from the two royal commissions of which it is the subject.

It just isn’t an opportune time to be handing its noteholders $630 million they were expecting under a July 2021 timetable. Crown is looking to revisit the prospect of allowing redemption in a year when its future is less clouded.

It is undoubtedly true that there remain COVID risks for Crown particularly as they relate to social distancing or spot venue closures. But there are additional risks produced each time more damaging evidence is uncovered at the West Australian and Victorian royal commission hearings that are delving into its murky past.

The evidence about Crown’s knowledge of the risks of the marketing of its casino in China goes directly to the class action mounted by shareholders.

And the evidence of money laundering not previously uncovered during the NSW inquiry only adds fresh fodder to a second shareholder class action, already filed in the Victorian Supreme Court alleging the company failed in its oversight and prevention of money laundering for many years.

In addition the mounting evidence that money laundering was being conducted under Crown’s nose could likely play neatly into AUSTRAC’s current investigation of the casino.

AUSTRAC told Crown in October last year that it had identified “concerns in relation to ongoing customer due diligence, and adopting, maintaining and complying with an anti-money laundering/counter-terrorism financing program”.

From that point shareholders have understood it was not a matter of whether but how much this would cost Crown.

How much a settlement of the class action claims or a potential AUSTRAC fine might cost Crown is anyone’s guess but analysts have penciled in as much as $400 million for AUSTRAC based on the number of Crown’s potential breaches.

The market has largely ignored the prospect that Crown will lose its licence to operate a casino in Victoria or West Australia.

It is also betting that Crown will have cleaned up its act sufficiently to be found suitable to hold a licence in NSW by some time later in the year. The NSW regulator is certainly making plenty of positive comments about Crown’s risk and governance remediation.

Whether the suggestions made on Monday at Victoria’s royal commission that criminal infiltration was greater than previously thought will impact Crown’s return to suitability in the eyes of the NSW regulator is yet another unknown.

The size of the potential fines and settlements could also have an impact on the future of the proposed merger between The Star and Crown. Star’s proposal contains a ‘no material adverse change’ condition (as do all such deals).

And given that Star has not been granted access to conduct due diligence on Crown it will have limited visibility on the potential AUSTRAC and class action liability.

A concise wrap of the day on the markets, breaking business news and expert opinion delivered to your inbox each afternoon. Sign up  Here.