(CNN Business)The price of bitcoin has nosedived after Tesla CEO Elon Musk said his company was suspending plans to accept the cryptocurrency as payment for electric vehicles.

Bitcoin was down 12% as of 6:50 a.m. ET on Thursday — bringing the coin’s price down to about $49,300, according to cryptocurrency news website Coindesk. Other digital currencies followed bitcoin lower, with ethereum losing 14% and dogecoin shedding nearly 20%.
Musk cited bitcoin’s high environmental cost as reason for the move, after months of being bullish on it.

“We are concerned about rapidly increasing use of fossil fuels for Bitcoin mining and transactions, especially coal, which has the worst emissions of any fuel,” Musk said in a note posted on Twitter Wednesday. “Cryptocurrency is a good idea on many levels and we believe it has a promising future, but this cannot come at great cost to the environment.”

Tesla did not immediately respond to questions regarding the move, including how many vehicles have been purchased with bitcoin and whether Musk was previously unaware of its environmental impact.

The environmental cost of mining — or creating — digital currencies has been well-documented for years, with the debate around them reignited in recent months as cryptocurrency-based tokens known as NFTs exploded in popularity.
Tesla (TSLA) and Musk have appeared fairly bullish on bitcoin for at least a few months, with the company disclosing in February that it had invested $1.5 billion in bitcoin and floating the ability to buy its cars using the cryptocurrency. Musk tweeted in late March that people “can now buy a Tesla with Bitcoin.” 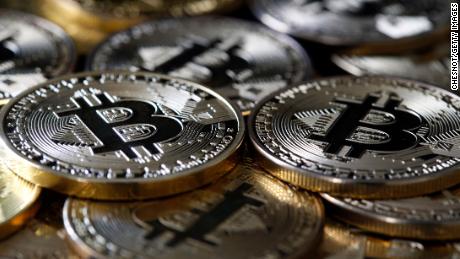 Musk, who has in the past expressed skepticism about cryptocurrencies, said in an interview on social app Clubhouse earlier this year that he thinks bitcoin is on the verge of “getting broad acceptance by conventional finance people.” He said he should have bought the digital currency eight years ago.
On Wednesday, Musk said Tesla still plans to use bitcoin after the currency finds cleaner energy sources.
“Tesla will not be selling any Bitcoin and we intend to use it for transactions as soon as mining transitions to more sustainable energy,” he said. “We are also looking at other cryptocurrencies that use <1% of Bitcoin’s energy/transaction.”

Bitcoin isn’t the only cryptocurrency Musk has touted in recent weeks. He has also repeatedly hyped the canine-themed dogecoin, tweeting about it to his 54 million followers and even sending its price crashing when he played a character on “Saturday Night Live” who called the currency a “hustle.”
Musk’s last tweet before his Wednesday bitcoin about-face was a poll asking followers if they wanted “Tesla to accept Doge.”
Source: Read Full Article