Rep. Deb Haaland, who would become the first Native American Interior secretary if confirmed, is set to appear before a Senate panel on Tuesday where the longtime progressive activist will face down two pro-fossil fuel lawmakers critical of her environmental positions.

There, she will be grilled by a group led by West Virginia Democrat Joe Manchin and Wyoming Republican John Barrasso, both of whom have vocally supported the coal and oil industries in what is sure to be one of the more contentious confirmation proceedings of the early Biden era.

The Senate Energy and Natural Resources Committee is the rare — if not only — Senate committee where both the Democratic chairman and top Republican largely agree on the main issues of jurisdiction. In this case, that promises to make for a difficult hearing for Haaland, who is on the polar opposite end of fossil fuel issues.

Chairman Manchin, is a conservative Democrat who hails from the nation’s second-largest coal-producing state and, according to the Washington Post, still holds a significant financial stake in that industry. His leadership on the Senate energy panel puts him in prime position to advocate for conservative environmental policies on behalf of his red state.

Meanwhile, Barrasso, the top Republican on the panel represents the nation’s No.1 coal-producing state. Wyoming is also one of the country’s top natural gas and oil producers.

Though they sit on opposite sides of the aisle, both men will likely grill Haaland with tough questions about Her long record of environmental activism, including her involvement in anti-pipeline demonstrations.

Barrasso is already signaling a combative approach to Tuesday’s hearing.

“Representative Haaland’s radical views are squarely at odds with the responsible management of our nation’s energy resources,” Barrasso said in a statement to Insider. “Her vocal opposition to oil and gas production on federal lands will only encourage President Biden along the illegal and reckless path that he has begun.”

Haaland opposes fracking or expanding fossil fuel infrastructure, advocates for a total shift to clean energy, and in 2016 joined other Native American activists in protesting against the Dakota Access Pipeline, cooking green chili and tortillas for fellow demonstrators.

Though Biden repeatedly said during the 2020 campaigns and as president that he would not ban fracking, he has pledged to ban new drilling leases on public lands, a contentious issue that would fall on Haaland’s plate as Interior secretary.

“Regardless of where I am, I’m still going to fight for the environment,” Haaland told Insider in an interview shortly before her nomination.

Expect the lawmakers at the hearing, several of whom also come from fossil-fuel rich states, to try to extract concessions from Haaland as a condition of their support.

Barrasso told Insider Haaland “must demonstrate that she will follow the law, protect the multiple uses of our public lands, and reject policies that will force energy workers into the unemployment line. I won’t support her nomination otherwise.”

Manchin who is probably now the most sought-after senator on Capitol Hill, seems ready to position himself as the moderate arbiter of President Joe Biden’s energy policy and has said he would give his Cabinet nominees a fair review. But he remains to the right of Haaland on continued use of fossil fuels.

Manchin on Friday made headlines when he announced he’d oppose the confirmation of Neera Tanden, Biden’s nominee to become director of the Office of Management and Budget, but experts from both sides of the energy debate expect he’ll back Haaland.

“I think [Manchin’s] gonna walk a fine line between asking some tough questions and still being a hospitable chairman of the Democratic-led committee,” said Frank Maisano, a longtime Washington-based energy industry consultant.

“He has come around from the days when he shot the climate bill to be more of a real leader on this issue” of energy policy, Maisano said. But, he added, Manchin  “certainly isn’t in the camp that Deb Haaland has been in.”

“I expect him to be a fair and honest broker but also present some objections he has to the initial approach that the Biden administration has taken both procedurally and substantively,” Maisano said.

Athan Manuel, director of the Sierra Club’s Lands Protection Program, told Insider that Manchin would ask Haaland tough questions about coal, “but we expect him to be supportive of her just the same.”

“I think he sees the big picture, both the historic nature of her candidacy as a Native American woman, but also he is really strong on public lands and national parks and protecting areas around the country. So I think the public lands agenda will certainly be a common ground between Mr. Manchin and Ms. Haaland.”

A historic — but controversial  — nomination

Biden has made other historic nominations to his Cabinet, but few were received with as much excitement as Haaland’s. A broad coalition of progressives, celebrities, House Democrats — and even a few Republicans — publicly urged Biden to choose her as his Interior secretary.

They argued that the department, which oversees issues concerning tribes and has had a long history of clashing with them, was overdue for its first Native American secretary. Her nomination also pleased progressives, who despite heavy campaigning did not see many officials from their ranks join the Biden cabinet.

In addition to placing her in a position of authority over tribal lands and education, the role would give her immense power to shape America’s energy and environmental agenda.

“The way I see her, as a fellow Native, is that her cultural upbringing has the respect of what’s around us, around nature in general,” said Montana state Sen. Johnathan Windy Boy, a Democrat and member of the Chippewa Cree Tribe.

Haaland’s nomination is in line with some of the Biden administration’s goals of significantly curbing America’s reliance on fossil fuels and shift to cleaner forms of energy such as wind and solar in order to avert the worst effects of climate change.

On his first day in office, he revoked the permit for the Keystone XL Pipeline. A few days later, Biden paused new oil and gas leases on federal lands and waters. Those actions reverse Donald Trump’s so-called energy dominance agenda that sought to vastly expand fossil fuel exploration on public lands to the chagrin of climate activists and his Democratic critics.

“There’s entirely not enough renewable energy projects and too many extractive industry projects on our public lands,” Haaland told Insider last year. “I would like to explore the idea of making our public lands more accessible to people and making them cleaner so that we are not polluting as much.”

Native American climate activists who were some of the most vocal backers of Haaland’s nomination expect her to bring her progressive stance on transitioning away from fossil fuels into the job even if they are unpopular with the industry.

“It’s difficult to be tough, but this is something that we have to do to move forward,” said Kandi White of the Indigenous Environmental Network. “What happens in Washington, DC on Tuesday impacts us greatly.” 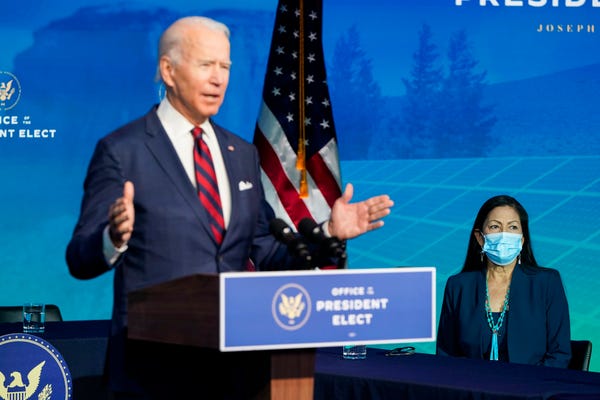 ‘She’ll probably get through this whole process’

Despite the tough welcome that awaits her, Halaand will have the backing of two oil-state lawmakers; Rep. Don Young, an Alaska Republican who is passionate about Native American issues, and Sen. Martin Heinrich, a Democrat of New Mexico are scheduled to introduce her at the hearing.

Still, other Republicans have previewed their attacks on the congresswoman in recent days.

Haaland’s backers were quick to jump on the tweet, pointing out that those positions were exactly why they wanted her in the job. Sen. Ed Markey, a Massachusetts Democrat — and the Senate’s lead proponent of the Green New Deal — reshared Cornyn’s tweet by repeating the same message, though the difference in sentiment was clear.

Meanwhile, oil and gas industry figures have lined up to voice opposition to Haaland’s nomination, arguing that restrictions on their sector would lead to job losses and a greater reliance on energy imports.

“We do have a number of concerns about some of the policy positions she’s taken as a member of the House and as a candidate for the House,” said Frank Macchiarola, a senior vice president at the American Petroleum Institute.

Despite the strong headwinds, nobody Insider spoke to expected Haaland’s nomination to fail.

Manchin “may ask some questions that are pretty pointed about fossil fuel development, but at the end of the day we expect him to support her both in a vote for her on the committee and obviously on the floor,” Manuel said.