Republican Briscoe Cain stood before his colleagues in the Texas House of Representatives a few weeks ago and struggled to answer questions about his repressive anti-voter bill or offer a factual justification for it. When pressed, he begrudgingly agreed with the Secretary of State’s assessment that the 2020 elections in Texas were safe and secure – that there was no evidence of rampant, coordinated fraud in 2020 or past elections.

So why did Cain exert so much energy on behalf of a sweeping bill that would criminalize procedural mistakes, embolden partisan poll watchers with unrestrained powers, and add more barriers to voting in a state well known for making it hard to vote? That would make it easier to “prove” fraud and overturn elections?

No stranger to controversy, Cain made headlines last fall when he flew to Pennsylvania to assist the Donald Trump campaign in its failed bid to overturn the will of the people. State Rep. Chris Turner asked Cain directly: “Is this bill simply a part of a continuation of ‘the Big Lie’ perpetrated by Donald Trump, that somehow he really actually won the presidential (election)? Is that really what this is all about?” Cain’s response from the House floor was an emphatic no.

Texas House Democrats gave their view of that answer by walking out of their chamber Sunday night before a midnight deadline, blocking final approval of the bill. But Gov. Greg Abbott already has pledged to call a special session to get it done.

Cain explicitly denied that his bill was about 2020, but we now know that’s not true. His bill is the product of a stealth operation by Heritage Action, the Heritage Foundation’s dark money lobbying tentacle, to undermine our democracy and pick up where the Jan. 6 U.S. Capitol insurrectionists left off.

She also revealed that Heritage wrote 19 provisions, which have not been publicly identified, for the bill introduced by Cain and made a confident promise that Abbott would sign it quickly. This promise was delivered by Heritage over a month before the voter suppression bill came to the floor for debate. 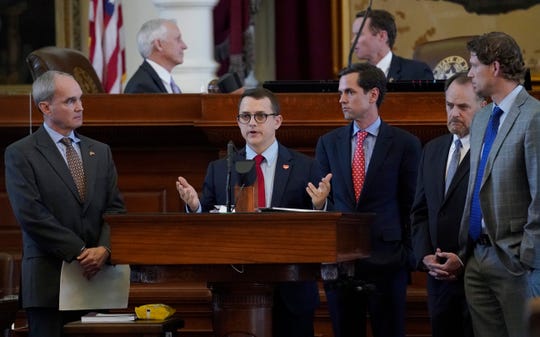 State Rep. Briscoe Cain speaks in support of a restrictive voting bill in the House Chamber at the Capitol in Austin, Texas, on May 6, 2021. (Photo: Eric Gay, AP)

Since its inception in 1973, Heritage has cast a dark shadow over our democracy and insidiously worked to reverse the hard-won victories of the civil rights movement, which achieved our country’s greatest advances in voting rights through sacrifice and struggle. Heritage’s co-founder Paul Weyrich clearly stated his intentions  when he explained in 1980, “I don’t want everybody to vote.” To this day, his words are reflected in Heritage’s actions and represent an ongoing threat to our democracy.

As we see in Texas, Georgia, Florida and elsewhere, Heritage and other Jim Crow revivalists are still driving efforts to limit access to the ballot box with laws that disproportionately affect Black and brown voters, young voters, low-income voters and other historically disenfranchised groups. Ever since Citizens United unleashed a flood of dark money into our elections and the Supreme Court gutted the Voting Rights Act, Heritage and others have accelerated their attack on our democracy and the right to vote. They have written undemocratic laws in the shadows while seeding the ground for voter fraud conspiracy theories to flourish in broad daylight.

The Big Lie and the failed insurrection at the U.S. Capitol demonstrate the danger of these collective efforts in stark terms that cannot be ignored.

Texans have been silenced and sidelined throughout this legislative session. At every turn, there has been a lack of transparency and accountability accompanied by a thinly veiled contempt for the democratic process. We have done everything we can in the legislature to defend our democracy against this latest attack, including the dramatic step of walking out. We’re prepared to take this fight to court, but true victory will come when our federal government acts to ensure our democracy is inclusive and equitable for all.

Seriously? Corporations don’t like voter suppression, so McConnell wants them out of politics.

We cannot let the Big Lie lobbyists and Jim Crow revivalists call the shots. Texans have been mobilizing against voter suppression for years, but the enemies of our democracy are ruthless and can’t be held off forever at the state level. Without federal action to protect the right to vote and ensure our elections are fair and secure, our democracy is in peril – not just in Texas or Georgia or Florida, but everywhere.

We cannot afford to preserve the filibuster if it costs us our democracy. Congress must pass the For the People Act and move quickly to restore and advance the Voting Rights Act, so that our country can finally realize its greatest promise of government for the people and by the people.