Passing a bill of a magnitude not seen since the Great Depression will require holding a fractious party together through an extremely tricky process that could blow up at any moment. To say Democratic leaders face a tough slog would be a massive understatement.

In the Senate, all 50 Democrats will need to be on the same page when it comes to what is included in the package and how it will be paid for. At the moment, a group of moderate Democrats say they are reserving judgment until they see more details. But progressives are largely falling in line, calling the size of the bill — which would be passed through reconciliation, a process that only requires 51 votes — a good starting point.

“I would like to do even more. But let’s be clear, what we are talking about is the most consequential piece of legislation since the 1930s,” Sen. Bernie Sanders (I-Vt.) told reporters when asked if the bill does enough to fight climate change.

The bill would make key investments to meet President Joe Biden’s climate change goals of making 80% of electricity generation “clean” and cutting national carbon emissions in half by 2030; funding a Civilian Climate Corps; weatherizing buildings; and establishing a clean energy standard. The programs are supported by environmentalists but could run into opposition from Democrats who represent more rural states. 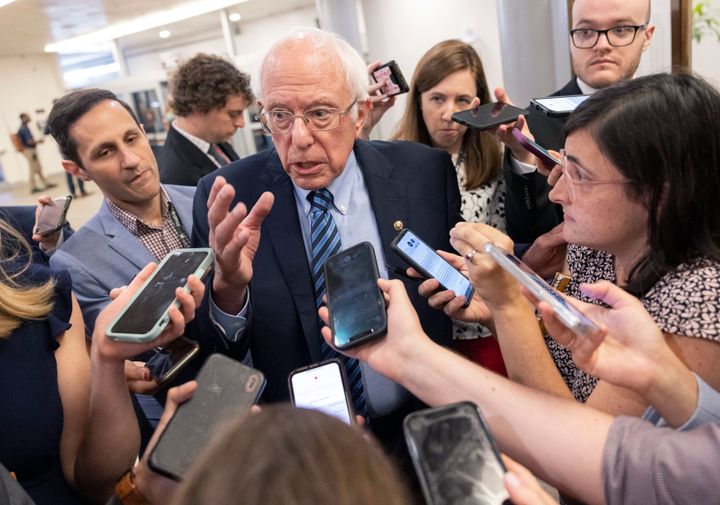 “If they’re eliminating fossil [fuels], and I am finding out there’s a lot of language in places eliminating fossil, that’s very disturbing,” Sen. Joe Manchin (D-W.Va.) told reporters about what he’s heard so far about the package.

How to pay for $3.5 trillion in spending could also present problems for a large-scale infrastructure overhaul. According to Democratic aides, the package would be offset in full by savings from prescription drug reform, tax increases on the wealthy, and “long-term economic growth” associated with infrastructure spending. It would prohibit tax increases on families making under $400,000, small businesses, or family farms.

It’s unclear, however, whether moderate Democrats in either chamber will go along with the kinds of tax increases their leaders say are needed in order to finance a $3.5 trillion bill, especially with midterm elections looming next year. Republicans are hoping to peel off enough of those members to sink the entire bill.

“I think a lot of these tax increases will be incredibly controversial. I would think Democrats will have a lot of heartburn,” Senate Minority Whip John Thune (R-S.D.) predicted Wednesday.

The $3.5 trillion proposal will include an expansion of Medicare to include dental, vision and hearing coverage; funding for child care and elder care for millions of Americans; and money for affordable housing, community college, paid leave, and universal pre-K. The bill would also expand the duration of the monthly child tax credit, which begins rolling out this week and is due to end at the end of the year.

Biden attended the weekly Senate Democratic policy lunch on Wednesday, where he cheered his party’s efforts to pass legislation, talked broadly about the opportunity to get the bill passed for American families, and took questions from a dozen senators.

“It’s great to be home, great to be back with all my colleagues, and I think we’re going to get a lot done,” the president told reporters afterward.

Meanwhile, the $3.5 trillion Democratic proposal could complicate things for the separate $1.1 trillion bipartisan infrastructure deal, which focuses narrowly on roads, bridges and waterways. Several Republicans involved in negotiations over the bipartisan deal said that they are not pleased with the $3.5 trillion package — even though Democrats had made it clear months ago that they would be proceeding with a larger bill that includes their priorities.

“I think it’s totally irresponsible,” Sen. Rob Portman (R-Ohio), a member of the bipartisan group, said of the $3.5 trillion total.

Portman would not say whether Democrats’ push for a partisan reconciliation package was making Republicans skittish about backing the bipartisan infrastructure proposal.

But Sen. Bill Cassidy (R-La.) argued that the Democratic proposal should not disrupt bipartisan infrastructure talks.

“There’s no reason why [Democrats] introducing a bill we knew they were going to introduce the whole time is going to keep somebody from supporting our bill,” Cassidy said.

Manchin, another member of the bipartisan group, expressed hope that Republicans would continue to separate the two (the bipartisan infrastructure plan and the larger reconciliation bill), saying that “the more Democrats keep trying to put the two together and the more they allow the Republicans to put them together,” the more likely it is for both to fail.

So far, negotiations remain centered in the Senate, where Democrats have a more delicate balance to strike between the 50 members of their own party and Republicans.

But House Democrats aren’t always a unified front, and House Speaker Nancy Pelosi, who said she supports the $3.5 trillion proposal, also has to consider both the progressive and moderate factions of her caucus — including several Democratic lawmakers that nearly lost reelection last year.

Rep. Pramila Jayapal (D-Wash.), who chairs the Progressive Caucus, said the budget proposal holds some “very, very good news,” including her priorities of expanding Medicare, investing in climate infrastructure, and taxing the wealthy.