NEW YORK — From high above the sidewalks of New York, America’s so-called “Paper of Record” peers down its nose with condescension at the nation whose news it deems “fit to print.”

It sees this country as a giant slave ship turned superpower that surges racism into every conceivable crevice in Earth’s crust. It slams America’s Founding Fathers who owned slaves; hammers New York Life Insurance, SUNY New Paltz, Georgetown University (my alma mater), and other institutions for their historical slave holdings, and even whacks President Abraham Lincoln for his “reluctant and late” signature on the Emancipation Proclamation.

As the New York Post’s Michael Goodwin observed, “The chief media cheerleader for the chaos unfolding across the nation…routinely eviscerates America’s heroes, its culture and, through the paper’s 1619 Project, its founding.”

In a pair of jaw-dropping articles, Goodwin recently exposed the invisibility of the slave-shaming robes in which the Old Gray Lady attempts to cloak herself. This media outlet’s family history is rife with slavery, Confederate boosterism, and enforcement of Jim Crow segregation. Regarding race, the Old Gray Lady should sit quietly in her rocking chair. She is in no position to wag her wrinkled finger at anyone.

As Goodwin explains, the extended Ochs-Sulzberger clan have owned this Leftist tip sheet since 1896. They are tainted by myriad racial horrors.

Abraham Mendes Seixas, an early Sulzberger relative, lived in Charleston, S.C. A local newspaper published a poem in 1784 as a sort of grotesque commercial jingle to market slaves. An excerpt:

“Abraham Seixas…He has for sale, Some Negroes, male…

“He has likewise Some of their wives…

“For planting, too, He has a few

“To sell, all for cash…or bring them to the lash.”

“Seixas was also the master or superintendent of the Charleston workhouse,” explains Robert Rosen, author of "The Jewish Confederates." “This was a city-run facility in which slaves were beaten for violating laws or rules or running away. It’s pretty bad. So he not only owned and sold slaves but he was paid to inflict physical punishment on them, which I’m sure could be described as torture.” 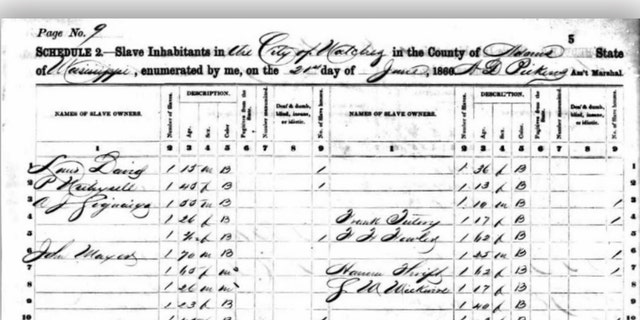 According to a family history that Goodwin cites, an Ochs relative named John Mayer lived in Natchez, Miss. He owned at least five unnamed slaves in 1860: two males (70 and 26) and three females (65, 45, and 23).

Mayer’s niece, Bertha Levy Ochs, was a gung-ho Confederate. Her brother, Oscar, and two cousins in Mississippi fought under General Robert E. Lee, whom she idolized. Levy “embraced a contemptuous antebellum view of blacks,” biographers Susan Tifft and Alex Jones report. Levy was caught smuggling medical-grade quinine, inside her son George’s baby carriage, from Ohio to Confederate agents in Kentucky. Nicknamed “that Confederate lady,” Levy was buried in 1908 with the secessionist flag draping her casket.

Ochs bought the “Paper of Record” in 1896. In 1906, it toasted the impending centennial of Confederate President Jefferson Davis's birth and cheered him as “the great Southern leader.” Ochs promoted Confederate veterans’ reunions and financed Confederate cemeteries in Tennessee.

Ochs died suddenly in 1935. According to Civil War Times, the United Daughters of the Confederacy “sent a pillow embroidered with the Confederate flag to be placed in his coffin.”

Meanwhile, Ochs’ brother George (the infant conspirator in his mother’s clandestine quinine deliveries), excelled as a Democratic politician. He was Chattanooga’s police commissioner, two-term mayor, and school board president. That made him a top enforcer of local and state Jim Crow segregation statutes.

The historical race hatred of this paper’s controlling family, thus, is beyond dispute. The Ochs-Sulzbergers will need buckets of Purell to clean their hands, now filthy from this problematic ancestry.

First, starting with Executive Editor Dean Baquet, every Black employee at the so-called “Paper of Record” should resign in disgust and storm out of its headquarters on Manhattan’s 8th Avenue.

Second, while the Obama-Biden Administration ignored this matter for eight years, the Democratic/media/Left suddenly demand that Fort Bragg, Fort Benning, and other military bases (but, somehow, not Yale) must abandon the names of the slave owners and Confederates after whom they were christened. By that logic, this slavery-stained outfit should be redubbed The 8th Avenue Gazette.

Third, this company’s owners should liquidate its $7.4 billion market capitalization and then transfer that money as reparations to the descendants of John Mayer’s five slaves and any others who might be buried beneath the Ochs-Sulzberger family tree.

If the Old Confederate-Gray Lady rejects these steps toward restorative justice, she conversely should renounce her raging campaign of collective guilt and intergenerational race war. This paper should acknowledge slavery as a large and ugly part of U.S. history but repudiate the 1619 Project’s alleged rationale for the American Revolution.

The Spirit of 1776 was not a bitter cry for White supremacy. Rather it was a noble quest for independence, limited self-government and individual liberty. Not immediately, but eventually, freedom expanded to include Blacks who gained their freedom, once the Union Army crushed the Confederacy in 1865.

The “Paper of Record” should lay bare its Southern, slave-owning, Jim-Crow-enforcing roots and admit that, like many U.S. institutions, its past blends grief and glory. But it should concede that Americans of the 20th, 19th, and 18th centuries should not be judged by the pristine standards of 2020.

The sooner that this country can accept all of its history — the good, the bad, and the ugly — without demonizing today’s citizens for the sins of their ancestors, the sooner Americans can return to the hard work of making this union more perfect.