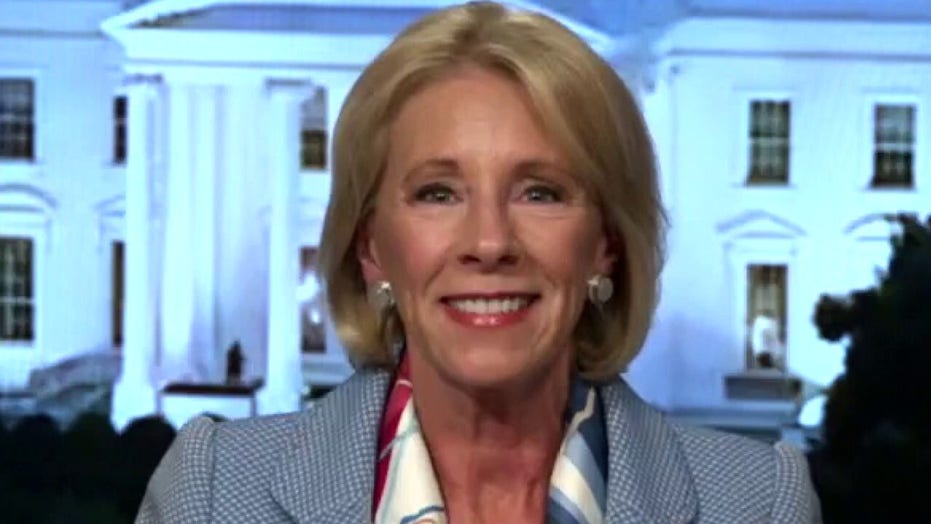 Kids have got to go back to school and continue their learning, says Education Secretary Betsy DeVos.

Education Secretary Betsy DeVos told "Tucker Carlson Tonight" Tuesday that her department is "seriously considering" withholding federal funding from school districts that do not make a honest effort to bring students back for in-person classes this fall.

"We are looking at this very seriously, this is a very serious issue across the country," DeVos told host Tucker Carlson. "Kids have got to continue learning and schools have got to open up. There's got to be a concerted effort to address the needs of all kids, and adults who are fearmongering and making excuses simply have to stop doing it and turn their attention to what is right for them and the students and their families."

Later in the interview, DeVos told Carlson that "if nothing else, this whole coronavirus has made more and more parents aware of what's going on in their own children's schools — or what isn't going on.

"Right here in suburban D.C., one of the most elite public school districts in the country — over $16,000 [spent] per student per year — they had an absolute disaster this spring," she added, apparently referring to Fairfax County Public Schools in northern Virginia.

"And now this fall they are suggesting that as a way to start school again you can choose zero days a week for your child to be in school or two days a week," she continued. "That's not a choice, that's a pretense of a choice.

"So, more and more families are at a point of demanding that their kids would be able to continue to learn and they want more options and choices for their kids, too."

At a White House event earlier Tuesday, Trump vowed that his administration would "put pressure on governors and everybody else to open the schools" after noting that administrators in Florida recently announced plans to reopen schools in that state starting next month.

Tuesday night, DeVos singled out Florida State Education Commissioner Richard Corcoran for praise, saying that he had given students and parents "a lot of latitude" for handling various issues thrown up by the pandemic.

"What the president and all of those at a roundtable today made very clear is the expectation that kids have got to continue their learning," she said. "There's no other reason to withhold full-time education."