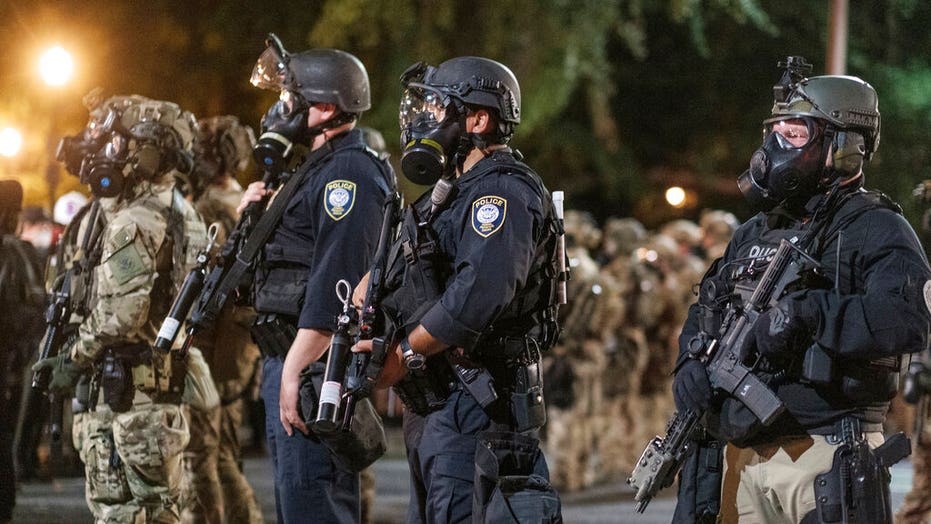 The Department of Homeland Security (DHS) pushed back Friday against a claim being amplified by liberal politicians and activists that federal agents who deployed to Portland to disperse protesters this week aren’t identifying themselves.

In a statement, DHS insisted that agents are identifying themselves as Customs and Border Patrol (CBP) agents. But they admitted agents are not wearing name tags – citing recent doxxing incidents against law enforcement.

"The CBP agents identified themselves and were wearing CBP insignia during the encounter," the DHS said in a statement. "The names of the agents were not displayed due to recent doxing incidents against law enforcement personnel who serve and protect our country."

One protester, Mark Pettibone, told The Washington Post men in green military fatigues and generic “police” patches jumped out of an unmarked minivan early Wednesday and arrested him as he walked home from what he characterized as a peaceful protest. He told The Post he was scared because he did not know who detained him. Reports of similar incidents have drawn condemnation from civil rights groups.

“Authoritarian governments, not democratic republics, send unmarked authorities after protesters,” said Sen. Jeff Merkley, D-Ore., on Twitter, along with a video of a protester being arrested and placed into an unmarked van. “These Trump/Barr tactics designed to eliminate any accountability are absolutely unacceptable in America, and must end.”

Acting Homeland Security Secretary Chad Wolf on Thursday accused Portland politicians of enabling the “mob” of protesters who have besieged the city for more than six weeks — and posted a lengthy timeline of the damage caused by “violent anarchists.”

“The city of Portland has been under siege for 47 straight days by a violent mob while local political leaders refuse to restore order to protect their city,” Wolf said in a statement. “Each night, lawless anarchists destroy and desecrate property, including the federal courthouse, and attack the brave law enforcement officers protecting it.”

CBP said they arrested Pettibone because they “had information indicating the person in the video was suspected of assaults against federal agents or destruction of federal property.”

CBP said that a “violent mob” descended upon them as they were arresting Pettibone so they took him to a safer location for questioning. Pettibone was then quickly released, and told The Post he does not know if he is being charged with a crime.

“While the U.S. Customs and Border Protection (CBP) respects every American’s right to protest peacefully, violence and civil unrest will not be tolerated,” DHS said in the statement. “Violent anarchists have organized events in Portland over the last several weeks with willful intent to damage and destroy federal property, as well as injure federal officers and agents. These criminal actions will not be tolerated.”

Mayor Ted Wheeler and other local officials have said they didn't ask for help from federal law enforcement and have asked them to leave.

CBP agents were sent to Portland to protect federal property. Federal officers have charged at least 13 people with crimes related to the protests so far, Oregon Public Broadcasting reported Thursday. Some have been detained by the federal courthouse, which has been the scene of protests. But others were reportedly grabbed blocks away.

Local officials have condemned the deployment of federal agents since a protesters was shot and severely wounded with a less-lethal round by a Marshals Service officer, and even moreso after the recent arrests.

“A peaceful protester in Portland was shot in the head by one of Donald Trump’s secret police,” Sen. Ron Wyden, D-Ore., wrote on Twitter. “Now Trump and Chad Wolf are weaponizing the DHS as their own occupying army to provoke violence on the streets of my hometown because they think it plays well with right-wing media.”

Oregon's Gov. Kate Brown called the federal presence in Oregon "political theater" by President Trump that has "nothing to do with public safety."

“I thought we’d already covered this after the attacks in Lafayette Square: the US government should not be using unidentified federal officers as a secret police force to terrorize US citizens & violate their constitutional rights. This is outrageous,” Sen. Elizabeth Warren, D-Mass., wrote on Twitter.