President Donald Trump’s campaign advertising is focused largely on issues that are of minimal concern to the American electorate, a HuffPost analysis of campaign ad spending data found, airing zero ads about the coronavirus pandemic in the month of July.

Trump is trailing former Vice President Joe Biden in public polling, and Republicans and Democrats alike are pointing to the utter irrelevance of much of the campaign’s messaging as a key reason why he is now a steep underdog to win a second term in the White House.

As the pandemic swept across the sunbelt states over the course of July, and the death total has climbed to more than 150,000 Americans, Trump and his campaign have devoted much of their energy to issues other than keeping Americans safe from the virus or rebuilding the economy afterward: painting Biden as a senile tool of the Democratic Party’s left wing; protecting statues of historical figures with ties to the Confederacy; making blatantly racist appeals to voters while repealing a little-known rule encouraging the construction of affordable housing in the suburbs; continuously litigating the investigation into Trump’s ties to Russia during the 2016 campaign and cracking down on protests around the country.

The data, from the ad tracking firm Kantar/CMAG, is clear. From July 1 to July 26, Trump spent more than $38 million to air television ads on broadcast and cable television networks. Not a single dollar went to ads dealing with coronavirus. The campaign’s official super PAC spent another $1.9 million on ads. Just $800,000 worth of their advertising dealt with the pandemic. 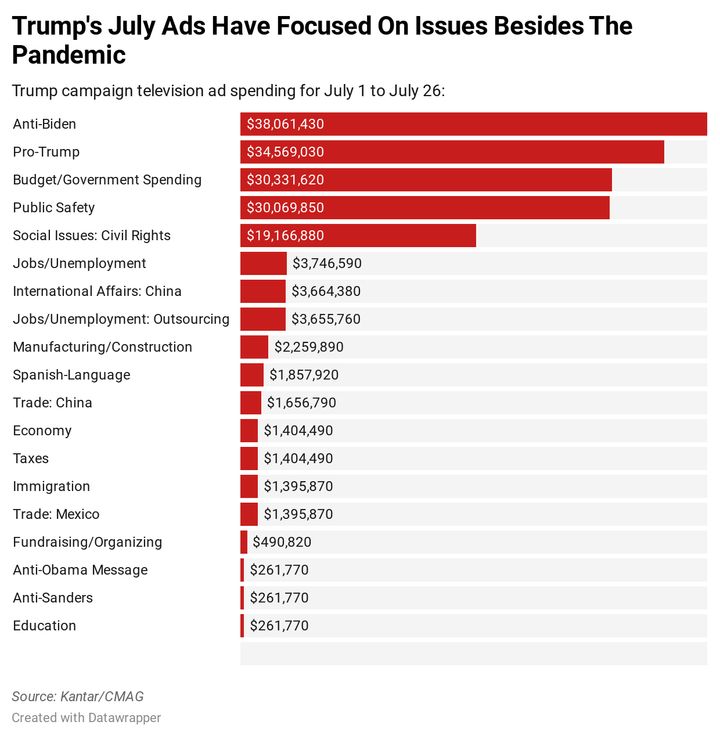 Biden, meanwhile, has overwhelmingly focused his financial firepower on coronavirus advertising. Of the roughly $17 million the campaign has spent on television, $16.7 million has gone to TV spots that discuss coronavirus. The campaign aired 20,956 ads, and just 527 of them didn’t talk about the pandemic in one way or another.

“Wear a mask, wash your hands, stay in when you can and socially distance when you go out,” Biden says in one 60-second ad that began airing last week. “I want every American to know if you’re sick, if you’re struggling, if you’re worrying about how you’re going to get through the day, I will not abandon you.”

Other Democratic groups, including the two major Democratic super PACs, were similarly coronavirus-centric. Every single ad released by Priorities USA, which spent about $3 million on ads, dealt with the pandemic.

Democrats have spent the month marveling at what they view as useless messages from Trump and his allies.

“There is nothing in it that strategically makes sense. They have to believe there’s an underground movement of people that are lying in every poll,” said J.B. Poersch, the president of Senate Majority PAC, which works to elect Democratic senators. “There’s nothing there for women, there’s nothing there reaching out to Latino voters. There’s nothing in this speech for the middle of the road. It’s all Republican base, all the time. He’s narrowing who he’s talking to instead of expanding itself.”

The Trump campaign did not respond to a request for comment.

A new HuffPost/YouGov poll found 36% of registered voters said the coronavirus pandemic was one of their top three issues for the presidential election, ranking it on par with perennial concerns about health care and second only to the economy. (The pandemic, obviously, has a direct effect on both health care and the economy.)

Registered voters, meanwhile, find many of the issues the Trump campaign is advertising on relatively unimportant. Only 22% said social issues were among their top three issues, and just 12% said the same of crime.

But the Trump campaign is talking relentlessly about crime on the airwaves. Of the more than 73,000 ads they aired from July 1 to July 26, according to Kantar/CMAG, 85% of them dealt in one way or another with public safety. One of their most frequently aired ads falsely accuses Biden of wanting to defund police departments.

“You won’t be safe in Joe Biden’s America,” text in the ad declares as a robber attacks an elderly woman who has tried to call 911.

It’s unclear if the major goal of Trump’s advertising ― which fits in with Trump’s law-and-order playbook that has also involved deploying aggressive federal law enforcement officers in Portland, Oregon, and other cities ― is actually to win over swing voters, most of whom live in suburbs untouched by major crimes and the current wave of protests over police violence. While major suburbs were once

At the moment, Trump may be focused more on consolidating a base of white conservative voters that has abandoned him over his handling of the pandemic with a “sense that Democrats are going so far to the left that they’re literally putting you in danger,” said Amy Walter, the national editor of the Cook Political Report.

“Part of the reason he’s down double-digits is that he doesn’t have the same support from Republicans that he did earlier in this year,” Walter said. “What keeps Trump in the game, and potentially turns a 10-point race into a 5-point race, is getting Republicans back.”

That switch probably won’t be enough to save Trump, but it could help Republicans retain Senate seats in red-tinted states like Montana, Iowa and Kansas. (Montana Sen. Steve Daines, who is running for reelection against popular Democratic Gov. Steve Bullock, began airing an ad that hits similar law-and-order themes earlier this week.) 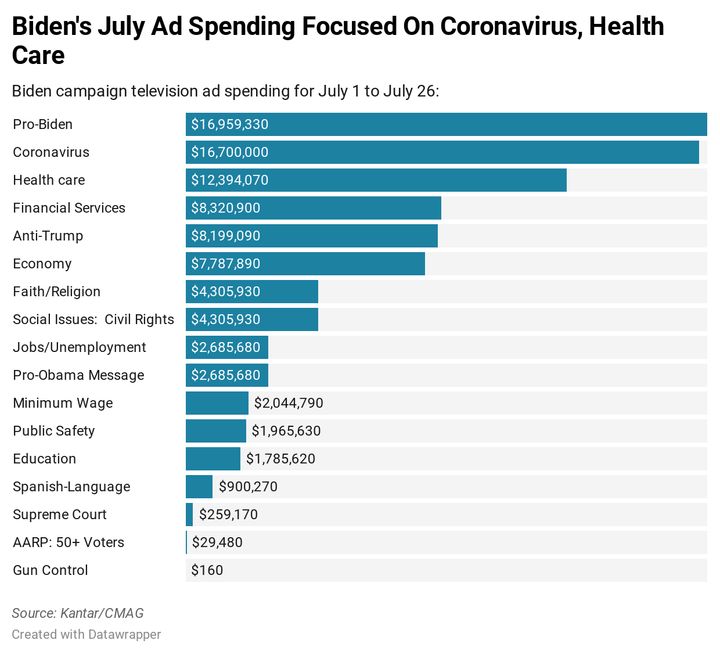 Trump’s other major focus is attacking Biden. Every single ad the campaign aired from July 1 to July 26 contained at least some anti-Biden messaging. (By comparison, only a little more than half of Biden’s advertising was explicitly anti-Trump.) The Trump campaign and other Republicans have long insisted the race will eventually turn into a referendum between a career politician in Biden and an economy-boosting businessman in Trump.

“A lot of Americans know of Joe Biden, but far fewer know about Joe Biden,” Trump campaign manager Bill Stepien said during a conference call with reporters last week. “Our job here every day is to change that and define him as who he is today: a tool of the extreme left.”

But Democrats insist those attacks aren’t landing. Priorities USA has tracked voters who have switched from supporting Trump earlier in the year to backing Biden now, and found most of them aren’t swayed by existing GOP lines of attack. And Trump’s inability to focus on a coherent critique of Biden only makes things harder for his campaign.

“In one press conference, we heard attacks on China, we heard a number of false attacks on immigration. The president accused Joe Biden of wanting to force all of us to build new buildings that don’t have windows,” said Guy Cecil, the chair of Priorities. “As long as the Trump campaign continues to engage in this, we feel good about the Biden attacks.”

Still, Trump’s dominance of the news cycle, and occasional forays into focusing on the pandemic ― think of his demands that schools reopen despite the pandemic ― mean voters don’t necessarily see him as ignoring it entirely, even if they do think he’s dangerously downplayed the health crisis.

Voters are most likely to see Trump as focusing on the economy in his campaign ― 47% cited it as among the three issues he’s addressed most, compared to a third who picked criticism of Biden, 31% who picked immigration, and 27% who picked the coronavirus outbreak.

Biden was most broadly seen as focusing on criticism of Trump (34%) and the coronavirus outbreak (33%), followed by health care (28%).

In both cases, perceptions about the candidates’ focus differed along partisan lines, with both parties accusing their opponents of negative messaging. Republican and Republican-leaning voters were most likely to say Trump’s message revolved around the economy, coronavirus and immigration, while Democrats and Democratic-leaning voters said they heard mostly about criticism of Biden, the economy, and immigration.

Still, Trump is in a problem of his own making. Voters widely see him as having failed on the most important issue in their lives, believing he ignored experts and downplayed the pandemic for his own political gains. Crafting a message around that fact is nigh-impossible.

“Voters’ day-to-day lives are consumed by the impact of the coronavirus: whether it’s worries about their health, whether their kids can go to school or their own employment status,” Walter said. “There’s not a whole lot to say on the coronavirus that’s going to be helpful for him.”

On Tuesday, the campaign began running a Facebook ad featuring a video of Ivanka Trump discussing the administration’s efforts to help Native Americans.