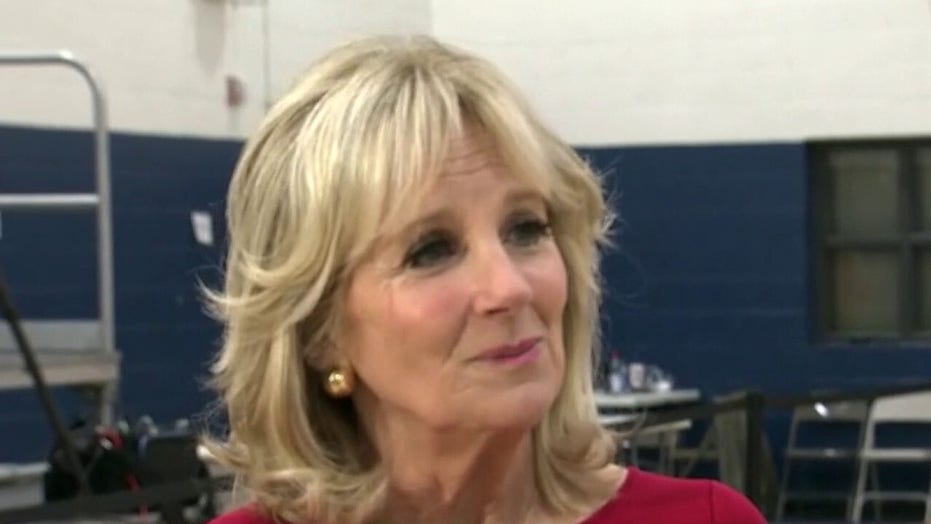 Democratic presidential candidate Joe Biden has taken heat for a lack of media appearances, but his wife, Dr. Jill Biden, took a break from the campaign trail to join “The View” on Wednesday to answer multiple questions about President Trump.

“I am meeting so many people as I travel across this country and I’m hearing so many different stories and, honestly, I feel inspired by the people that I’m meeting and I know that we’re going to make such a great change, a positive change in people’s lives,” Dr. Biden said when asked if she’s exhausted from the campaign.

“I’m not tired,” she added before “The View” co-hosts took turns asking Biden questions that set her up to bash Trump.

BIDEN SAYS 'YOU AIN'T BLACK' IF TORN BETWEEN HIM AND TRUMP, IN DUSTUP WITH CHARLAMAGNE THA GOD

Joy Behar then asked what Joe Biden would do to help migrant children who were separated from their parents along the southern border. Behar called it a “human rights violation” and asked if the Trump administration should be held accountable.

“We wouldn’t even be here if Joe were president, there would be no separation of families at the border,” she said. “We have to find a way to reunite these families. As a mother, this breaks my heart. I can’t even imagine it.”

Ana Navarro went next, asking Biden how her husband would have handled coronavirus differently than the way it was managed under Trump.

“We can’t do anything until we get this virus under control and you’ve heard the scientists and the doctors, that’s who we’re following and they are saying, ‘Wear your mask, socially distance,’ and we’ve got to come together. … This can’t be a political issue, this is a public health issue and if you’re not going to wear your mask for yourself, wear it for your neighbor,” she said. “Do it for someone else.”

Sunny Hostin noted that Trump supporters “are still packing into rallies” amid the coronavirus pandemic and questioned why the pandemic has become so political.

“Why do you think Trump supporters still believe him over our scientists?” Hostin asked.

Biden blamed Trump, saying his administration has made the pandemic a political issue.

“We need to listen to the doctors and the scientists, that’s what we have to do. I think it’s totally irresponsible that people are going to these rallies and they’re not wearing masks, they’re not socially distancing it’s irresponsible and people will die because of this,” Biden said.

Behar then scolded Trump for using Barron Trump’s quick recovery from coronavirus as an excuse to open schools.

“I personally am very, very skeptical of opening all of these schools. So far, it seems to have worked out a little bit because some schools have precautions,” Behar said. “But one size fits all does not work. Am I right?”

Biden reminded viewers that she is a teacher before claiming, “Nobody wants to get back to school more than the teachers do,” but dismissed the notion that America is ready to reopen all schools.

“We are listening to what the doctors and the scientists are telling us and when it’s safe to go back, we’ll go back. But right now we have to do this remote learning. I mean, parents are doing an incredible job. I know how hard it is,” she said.

Sara Haines chimed in, noting that “President Trump doesn’t remember if he took a [COVID] test the night of the first debate,” and wanted to know how the Bidens would handle it if he refused to take a test before Thursday’s scheduled debate.

“The Trump campaign has said they will adhere to the rules and take the test and we will have the result before Joe walks onto that stage,” she said.

Hostin then declared that the former vice president “showed remarkable restraint” when Trump attacked his family during the last debate.

“He continued those attacks at rallies, encouraging the crowd to lock Joe up, and on Monday he claimed that there is some sort of story on the way about a scandal involving your family,” Hostin said. “How do you feel about these constant personal attacks and how do you respond to them?”

KAMALA HARRIS CRITICIZED FOR LACK OF PRESS AVAILABILITY: ‘WHAT ARE THEY AFRAID OF?’

Biden said she doesn’t like to see her family attacked but chalked it up to “distractions” and said the election “is about the American people” and they don’t want to hear “smears” against her family.

“Donald Trump just ranted, I don’t even know what he was doing up there,” she said.

Biden was then asked about Kamala Harris, her “great” relationship with Michelle Obama and if her platform would involve children and education.

Biden was not asked specifically about her stepson, Hunter Biden, who has come under fire after a series of New York Post bombshells revealed the content of his alleged laptop. When her husband, the former vice president, was asked about the Post report he snapped at the reporter who posed the question.