Elon Musk has blamed the soaring cost of parts for raising the price of every Tesla model.

The electric carmaker has increased the cost of its cars in the UK in recent days and raised them twice in the US and China over the past week. 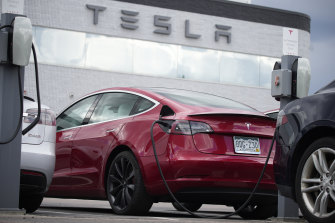 Tesla has hiked the prices of its vehicles.Credit:AP

Tesla’s website also says that some orders will not be delivered until November as it struggles to source enough parts to meet demand.

Musk, Tesla’s chief executive, said this week that both Tesla and his rocket company SpaceX were dealing with substantial cost increases.

The world’s most valuable carmaker has navigated a punishing shortage of microchips better than many of its rivals in the past year, rewriting software to deal with alternative chips and reaching record production levels.

However, the continuing shortage and sanctions on Russia are believed to have squeezed the car industry. It has relied on aluminium from Russian producer Rusal, founded by the sanctioned oligarch Oleg Deripaska, since 2020, CNBC reported.

Nickel, a key component in electric car batteries, has also soared in price. Last week the London Metals Exchange suspended trading in the nickel market after the price surged 250 per cent in two days.

Tesla’s cheapest vehicle in the US now costs $US46,990 ($65,280). In 2019, its cheapest Model 3 cost $US35,000, although that version is no longer made. The price rises deal a blow to Musk’s efforts to make electric cars affordable and accessible, even as Russia’s war in Ukraine raises the cost of petrol.

Volkswagen said it had already sold out of some electric vehicles for the rest of the year due to strong demand. Arno Antlitz, the German giant’s chief financial officer, said some models would now not be available until 2023.

Rising demand meant electric vehicles would reach price parity with petrol-powered ones sooner than the two to three years the company had expected, he added.

VW has been forced to suspend production at some plants due to the Ukraine war and said that a prolonged conflict could force it to move more manufacturing outside Europe.