Amazon is reversing two decades of fervent retailing gospel and nudging its customers into buying less, according to reports.

The online shopping giant appears to be scaling back the automatic product recommendations that have helped it achieve international dominance as it struggles to deal with the logistical equivalent of a permanent Christmas. 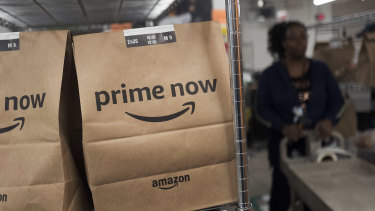 Amazon has hired extra staff as it struggles to meet demand during the coronavirus.Credit:AP

Indeed, a survey by The Telegraph yesterday found almost no recommendations appearing under everyday items, except for "sponsored" ones that bring in advertising revenue for the company. Despite these measures, its internal "speed team" of executives, charged with restoring normal supply levels and delivery times, reportedly believes that it may not return to its previous capacity for more than two months.

It comes as Amazon's chief executive, Jeff Bezos, told shareholders that it was facing "major challenges" due to a spike in demand that, "unlike a predictable holiday surge… occurred with little warning".

Sanchit Jain, an e-commerce economist at Enders Analysis, said: "This is entirely unprecedented for Amazon… it's a complete departure from the norm. It is really the first time where Amazon is encouraging people to focus just on what they need rather than encouraging them to buy more.

"It's a real indicator of not only how strange this time is but also the pressure that Amazon is facing in its day-to-day operations… [it] has never faced such a challenge to its warehousing capabilities."

The changes are a surreal turn for a company famous for its merciless commitment to upselling.

The bumper sales period has sent Amazon's share price to record levels, bolstering the fortune of Bezos, whose net worth has now jumped by more than $US40 billion in 2020.