The wealthy Liberman family-backed Impact Investment Group, which bills itself as a social and environmentally responsible fund manager, has torn up its contract with Grocon to construct an $111 million office tower in Collingwood, a week after the developer put 39 construction companies into administration. 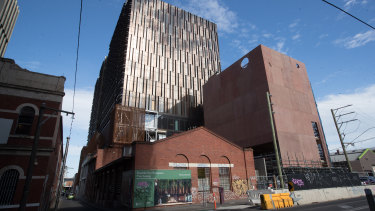 Grocon’s Collingwood Northumberland project. The developer was founded 73 years ago by Luigi Grollo and has been run for many years by his grandson, Daniel. Credit:Simon Schluter

The fund manager expects to lose more than $20 million as a result of Grocon’s demise.

The termination will put further pressure on Grocon, with at least two of its construction companies linked to the Collingwood Northumberland project that are not currently in administration likely to be tipped over the edge.

Work on Impact’s 12-level inner-city office ground to a halt months ago after Grocon failed to pay subcontractors on the site.

An email from Impact, seen by The Age and The Sydney Morning Herald, that was sent to Grocon’s subcontractors says the fund manager will be “left more than $20 million out of pocket.”

"Even after calling in the administrators, Grocon wanted to continue with the project, while at the same time advising us that they had no money to contribute towards the cost overruns to complete the project or to pay subcontractors for works performed and for which we have already paid Grocon," the email said.

The 11-storey Northumberland office was due to finish by the end of the year with anchor tenant cosmetic brand Aesop to start occupying a large chunk early in 2021.

It is backed by debt funding from Wayne Lasky’s MaxCap and another lender.

The once-prolific Grocon is also struggling with a legal stoush over its Sydney Barangaroo project.

Grocon director Daniel Grollo last week blamed the collapse of his famed Melbourne construction firm on the NSW government's infrastructure arm, saying its handling of a legal dispute over the Barangaroo project tipped the group over the edge.

Mr Grollo said his group was now "fighting for survival" due to the "unconscionable conduct" of Infrastructure NSW.