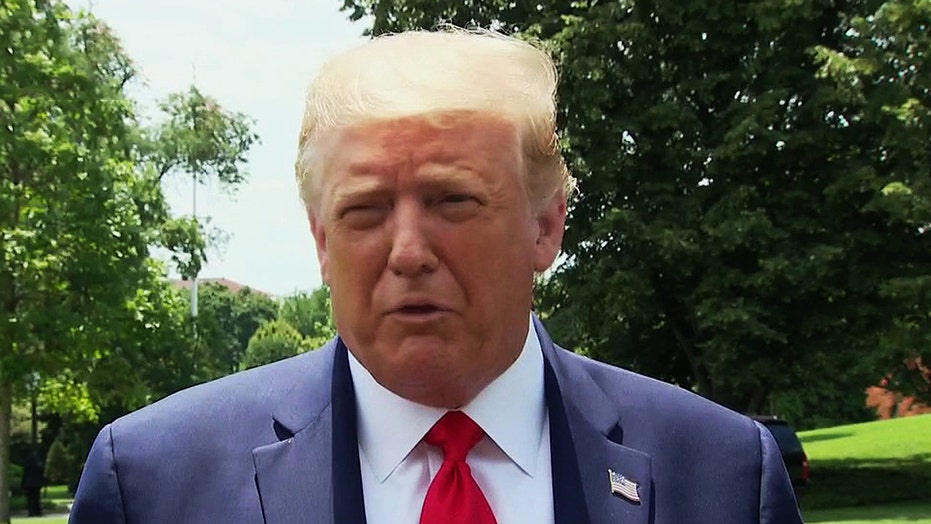 Trump: We want schools to be open and they will be open on time

With America in turmoil, its pandemic spreading, its businesses struggling, its politics utterly polarized, just about everything comes down to a question of trust.

And just about everyone is failing.

Much of the public doesn’t trust the Trump administration, the Democrats, most of our institutions, or the media.

And increasingly, the players in public life don’t trust each other.

President Trump has been trying to discredit what he calls fake news for nearly four years–and especially in the period stretching from impeachment to the coronavirus, the reverse is just as true.

Just yesterday, after opinion editor Bari Weiss resigned with a mighty blast at the New York Times, Trump tweeted that the paper is “under siege…people are fleeing, a total mess!”

The president doesn’t trust the CDC, which is why hospitals have now been told to report their COVID-19 numbers directly to the federal health department.

The president and his White House don’t trust Anthony Fauci, and yesterday we had the bizarre spectacle of trade adviser Peter Navarro trashing him in a USA Today op-ed: “Dr. Anthony Fauci has a good bedside manner with the public, but he has been wrong about everything I have interacted with him on.”

The White House quickly distanced itself, saying Navarro had gone rogue, and the president told reporters that Navarro shouldn’t have made “a statement representing himself,” and that he and Fauci are on the “same team.”

Fauci, who at 79 is one of the few people widely trusted on the virus, told the Atlantic that the whole campaign against him is “bizarre,” saying: “Ultimately, it hurts the president to do that. When the staff lets out something like that and the entire scientific and press community push back on it, it ultimately hurts the president.”

Given the gargantuan challenges of coping with the coronavirus, it seems like the squabbling, backbiting and yes, lack of trust, isn’t what the country needs right now.

Of course, for a president who ran as a disruptor, there is a long list of targets he has come to oppose: The FBI. The Fed. The State Department. Inspectors general. The Supreme Court, at times. Jeff Sessions (who he helped knock off in Tuesday’s Alabama Senate primary). And there are former confidants who have long since broken with the president, from Jim Mattis and Anthony Scaramucci to John Kelly and John Bolton.

Trump also doesn’t trust the governors, especially Democratic governors, which is why he’s pressuring them to reopen schools in September with the threat of a funding cutoff. And the likes of Andrew Cuomo and Gavin Newsom don’t much trust the president. The same goes for the relationship between Trump and the Democratic mayors of Seattle and Minneapolis.

Our rough-and-tumble politics has always been divisive, and that was true back when Trump was mainly building hotels and casinos. House Republicans impeached Bill Clinton two decades before House Democrats returned the favor with Trump.

SUBSCRIBE TO HOWIE'S MEDIA BUZZMETER PODCAST, A RIFF OF THE DAY'S HOTTEST STORIES

But there have also been moments like 9/11, when the nation was under attack and responded with a sense of unity.

If government officials are both openly and stealthily trashing each other, how is the public supposed to have faith in them to handle a major crisis?

No wonder polls show Republicans and Democrats disagree about the seriousness of the coronavirus, and some blame media fear-mongering, even the country shatters the records for daily cases from back in March and April. No wonder they can’t even agree on whether to wear masks. How are they supposed to know who to believe?