Republican-controlled legislatures across the country have introduced dozens of bills targeting transgender youth, building on conservative dog whistles and putting some of the country’s most vulnerable at risk, human rights groups say.

The bills fall into two main categories: At least 17 states are considering laws that would limit access to health care for young transgender Americans, and 28 more have bills excluding trans kids from school sports, according to a tally by the American Civil Liberties Union.

So far, the effort is working. Bills prohibiting children from playing on sports teams in line with their gender identity have already been passed in Arkansas, Mississippi and Tennessee — and other measures are moving forward as well.

South Dakota Gov. Kristi Noem (R) went so far as to say she was “excited” when such a bill passed in her state. She later declined to sign it, saying she was worried about legal challenges, and instead issued a pair of executive orders she said would “protect” sports teams this week. 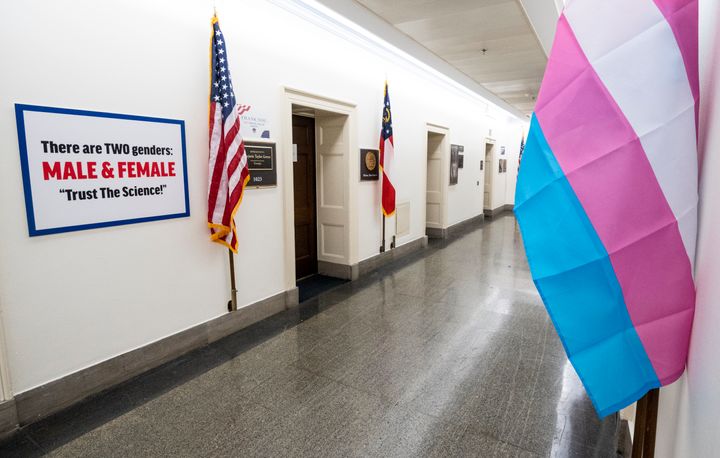 The push to roll back freedoms for transgender kids amounts to a dramatic uptick in exclusionary legislation by GOP lawmakers that builds on the far-right push to establish anti-trans bathroom laws, human rights groups say.

“We are truly witnessing an escalation of attacks on trans people, unlike anything I’ve ever seen in government,” Chase Strangio, deputy director for transgender justice at the ACLU, told Democracy Now. “I think what we’re seeing today in state legislatures is a particular effort to pivot from the anti-trans restroom bills into a new form of regulation of trans young people and trans bodies.”

The ACLU has pledged to file suit against such bills, and a judge overturned legislation in Idaho last year that sought to exclude transgender girls from girls sports teams. But studies show that a vast majority of trans youth feel unsafe at home and at school, Strangio said, and ongoing efforts will only contribute to that.

President Joe Biden has moved quickly to undo some of the Trump administration’s efforts to exclude transgender people from everyday life, including lifting a ban on trans service members in the military on Wednesday. But efforts to target young trans people have multiplied this year. Republicans have often worked in conjunction with religious conservative groups to repackage anti-trans legislation and use it toward their larger fight against political correctness, The New York Times notes.

This bevy of legislation relies heavily on misinformation and negative tropes about transgender people, and flies in the face of medical advice.

After the Arkansas legislature overwhelmingly passed a harmful bill that would prohibit doctors from providing medically necessary treatment to trans youth, the president of the American Academy of Pediatrics said it was a “dangerous” attempt to politicize medicine.

“This is discrimination by legislation and transgender children and all children deserve better,” Dr. Lee Beers said. “It puts politicians rather than pediatricians in charge of a child’s medical care.”

The Arkansas bill, titled the Save Adolescents From Experimentation, or SAFE, Act, leans heavily on conservative dog whistles about transgender people. LGBTQ rights groups have called on the state’s Republican governor, Asa Hutchinson, to veto it. Hutchinson has not said whether he supports the bill, but he signed the bill prohibiting transgender girls from competing on sports teams last week.

“They would deny them live-saving, appropriate health care not because it’s good public policy but because politicians believe that it will bring them more power,” said Rodrigo Heng-Lehtinen, deputy executive director for the group. “We need to remember that these are children. All children deserve to have access to the support and health care they need to live happy and healthy lives.”