If you look at the country using a typical election map, it looks a lot redder than it does blue, even though Democrat Joe Biden won the White House.

That’s because those maps generally assign one of those colors per state, based on the total vote. But huge swaths of the country have little population, making it appear that the vast majority of the U.S. votes Republican, when in fact, the nation was nearly evenly divided this year — with Biden sitting at around 74.5 million votes and President Trump at 70.3 million as of Saturday evening.

A different map of the 2020 election shows that when you visualize the vote by population, you get a completely different picture.

Using different colored and sized dots to reflect the vote across the country, Karim Douieb of data science company Jetpack.AI made a map that provides a clearer look at how votes from both parties are dispersed across the country.

Blue dots appear in “solid” red zones from Mississippi to Idaho. Red dots surround big cities and dominate many areas. And a large part of the map is white, reflecting the fact that few people live in those spots. 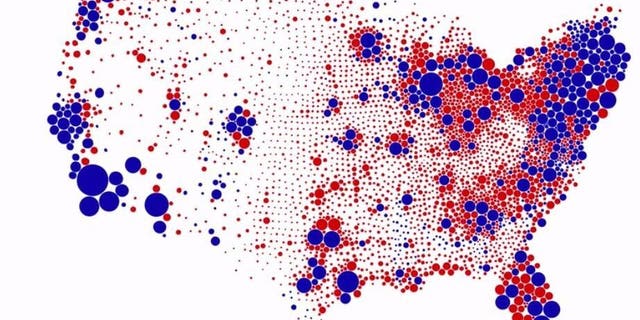 I am not the first one and I surely won’t be the last one to point out that traditional electoral maps are a misleading way to represent the outcome of an election,” Douieb tweeted when he created a version of his map using 2016 election data that went viral in February.