Members of the House Freedom Caucus on Thursday called for House Minority Leader Kevin McCarthy to boot Reps. Adam Kinzinger and Liz Cheney from the House Republican Conference, yet another chapter in the intra-party battle between the two anti-Trump Republicans and Trump’s loyalists.

Rep. Andy Biggs, R-Ariz., said that having Cheney, R-Wyo., and Kinzinger, R-Ill., in the conference, which is supposed to be an organization where Republican can plan their political strategy, is “antithetical” to its purpose because they sit in the select committee investigating the Jan. 6 attack on the Capitol.

“It was antithetical to have sitting in your conference individuals who professed that they want to take out the minority leader and then they want to go join the Democrats on a witch hunt through the Republican Party,” Biggs said.

He said Republicans should not tolerate “those who’ve chosen to support the commission… to go after Republicans.”

“We’ve got two members… of our party who have switched teams,” Rep. Ralph Norman, R-S.C., said. “What if you had a football game and two players just all of a sudden kept the same uniform but started playing for the other team. Something has got to be done.”

Cheney and Kinzinger, meanwhile, say it is the other Republicans who have lost their way and are doing damage to the country by uncritically supporting former President Trump’s false claims that the presidential election was stolen, and by minimizing his role in the Jan. 6 attack on the Capitol by his supporters.

“There is clearly a battle underway for the soul of the Republican Party,” a Cheney spokesperson told Fox News. “These members represent a dangerous rot that is rooted in the Big Lie, conspiracy theories, bigotry, and disrespect for the rule of law and our law enforcement. Liz knows we have to fight against that to save the party of Lincoln and Reagan.”

Regarding previous calls from some Republicans for Cheney and Kinzinger to be stripped from their committee assignments, Kinzinger said Tuesday he is not concerned.

“If people want to get petty, that’s fine,” he said. “I think that reflects more on people than it does on the situation at hand.”

There were approximately a dozen representatives at the press conference. They included Reps. Lauren Boebert, R-Colo., Matt Rosendale, R-Mont., Jody Hice, R-Ga., and several others. The members also re-upped their calls for McCarthy to put forward a motion to remove House Speaker Nancy Pelosi, D-Calif., from the speakership.

The Freedom Caucus is a group of rabble-rousing conservatives in the House, whose membership has often taken issue with the GOP’s more moderate elements and its party leadership.

But the call for two members to be expelled from the conference is a significant step in the continuing fight over whether Trump should be the future of the GOP. And the hostile tone taken in pressuring McCarthy, R-Calif., to cede to their demands underscores a growing impatience with leadership from some of the farther right members of the party.

In calling for Pelosi to be ousted, the Freedom Caucus members cited two major incidents — when Pelosi refused to seat Reps. Jim Jordan, R-Ohio, and Jim Banks, R-Ind., on the Jan. 6 select committee, and Thursday’s guidance from the U.S. Capitol Police threatening arrest for people who do not follow the new House mask mandate. 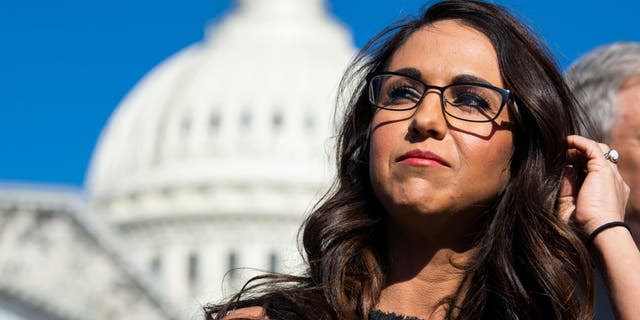 “The bottom line, enough is enough of what we’ve put up with here,” Hice said. “She puts forth this draconian rule that says guests and our staff can be arrested for not wearing a mask. Are you kidding me?”

Boebert, meanwhile, extolled the Freedom Caucus for its work said that she was “calling on the leader of this conference to lead with us” in trying to oust Pelosi and by expelling Kinzinger and Cheney.

“You can caucus, you can conference, with Republicans or Democrats. There is no independent conference,” Boebert said. “Representatives Kinzinger and Cheney have done more to hurt the Republican Conference than help them… These members should not be allowed in our closed-door private meetings or even the Republican cloakroom.”

Boebert added: “Both Liz and Adam have stood by and ‘simped’ for Pelosi.”