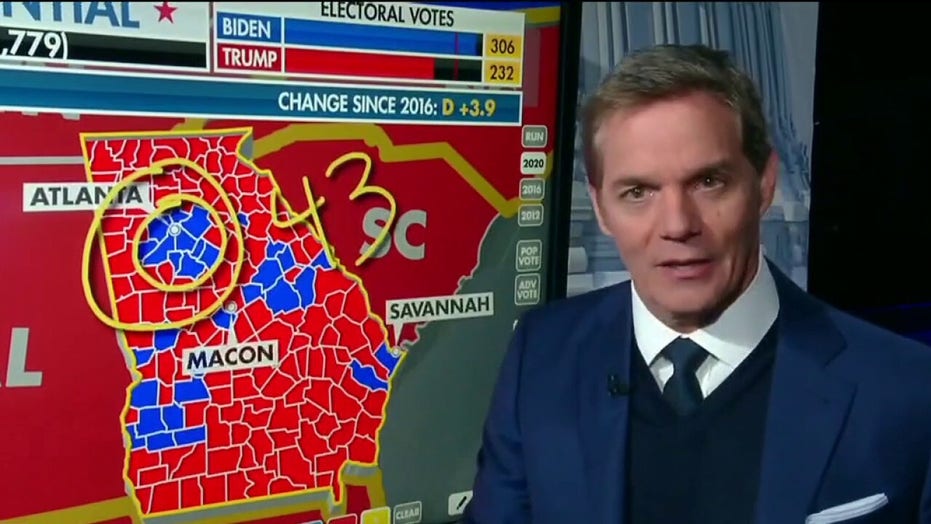 Votes are rolling in the Georgia Senate runoff elections after two months of fierce campaigning in two races, with the state under an unprecedented microscope.

Control of the upper chamber is on the line as early returns are inconclusive, with many key counties only reporting a handful of votes.

About $500 million was spent between the two races, amounting to some of the most expensive two months of nonpresidential politics in American history. Boldface political names from across the spectrum made their Peach State pilgrimages to stump for their respective party's candidates, including a bevy of other senators, U.S. representatives and former presidential candidates.

If that was not enough to underscore the importance of the race, current, former and future presidents and vice presidents also stumped for Loeffler and Perdue, or Warnock and Ossoff, respectively. 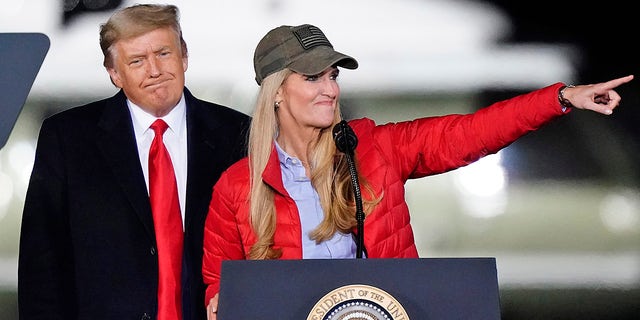 "Everything that we've achieved together is on the line," Trump said Monday.

"Unlike any time in my career, one state, one state can chart the course, not just the next four years, but for the next generation," Biden said, also Monday.

In the November elections, Republicans won enough Senate races to control 50 seats in the chamber. That means if they win just one of the races on Tuesday, Republicans will hold a majority in the body for the next two years. If the GOP caucus remains united, they'll have an effective veto over much of Biden's agenda. That agenda, Republicans have said, would be a transformational far-left plan to change the country. 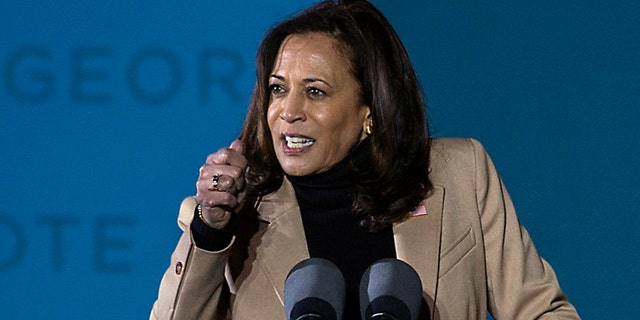 "You heard Joe Biden just today say that this is a generational election. What does he mean by that? Well, it's exactly what [Senate Minority Leader] Chuck Schumer said. Take Georgia and change America," Perdue, a former businessman, said on Fox News' "Special Report" Monday. "[Rep. Alexandria Ocasio-Cortez, D-N.Y.] said, no, we want to win those two seats because we do not want to negotiate. They want the Green New Deal without compromise."

If Democrats sweep both races, however, they will bring the Senate to an effective 50-50 tie. That would mean Harris would be able to break ties on votes falling along party lines.

However, in the event of a 50-50 tie, the situation in the Senate would be somewhat more complicated than Democrats being able to pass whatever they want.

In the past, Republican and Democrat leaders have worked out power-sharing agreements when the body was tied 50-50. Any legislation would have to get past a filibuster. And with such tight margins, the balance of power has sometimes even changed within a single Congress — something not entirely out of the question given the number of septuagenarians and octagenarians in Congress. 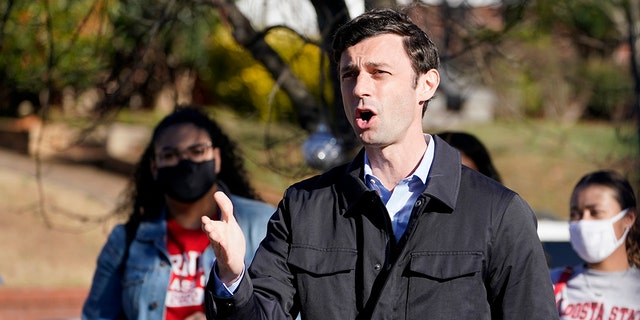 Moe Vela, a former senior adviser to Biden when he was vice president, told Fox News that no matter the outcome in Georgia, he believes Biden will be able to negotiate with Republicans to get at least some of his agenda across the finish line.

"I disagree with most people's assessment of the impact of today's races. I don't think that they are going to alter the president-elect's agenda initiatives," Vela said. "For 40-something years, over 45 years, if you go back and look at this man's career… this man knows how to work with people who don't always agree with him. This man knows how to build bridges with people who have different ideologies, different perspectives."

But nevertheless, victories for Warnock and Ossoff Tuesday would give Democrats a decided upper-hand while one win for either Loeffler or Perdue would allow Senate Majority Leader Mitch McConnell, R-Ky., to keep a grip on the job he's held since 2015. 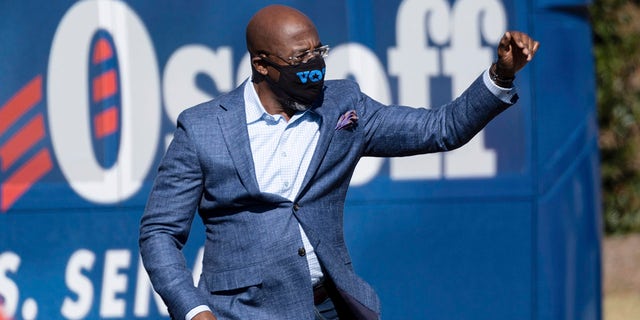 As results roll in Tuesday, whether the state sees higher turnout will be key. Republicans are counting on heavy Election Day turnout in rural areas, particularly in North Georgia, which is where President Trump held a rally Monday.

A senior GOP campaign staffer told Fox News that if Republicans could turn out 1 million GOP voters on Election Day, they believe they'll win the election. Perdue and Loeffler, meanwhile, released a joint statement saying they were seeing good numbers in the precincts that matter to them.

"We are encouraged by reports of high voter turnout across the state – particularly so in North Georgia, where President Trump rallied Republicans last night," the statement said. "But make no mistake about it: this is going to a very close election and could come down to the difference of just a few votes in a few precincts across the state."

But, if turnout in urban areas is in the same ballpark as that in rural areas Tuesday, Democrats may hold the edge. Democrats traditionally win larger margins in early voting ballots and mail-in ballots.

Underscoring the urgency on both sides, Republicans were sending text messages and making calls to their supporters telling them to get in line at polling places even into the 6 p.m. hour Tuesday.

GEORGIA'S SENATE RUNOFF WINNERS MAY NOT BE KNOWN TONIGHT

The race has been as nationalized as any U.S. Senate race in history. Rivers of out-of-state money and support have flowed for each candidate. Ossoff, a former congressional staffer and the current CEO of a documentary film company, has taken to telling voters that the Biden agenda was achievable — but only if voters picked him and Warnock. 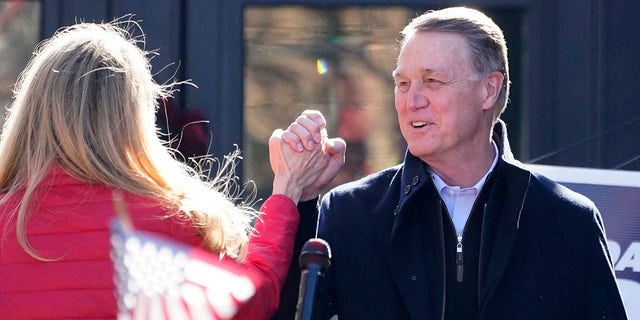 "We can pass a historic infrastructure plan that includes massive investments in clean energy, energy efficiency, and environmental protection," he tweeted. "But we need to win the Senate."

"We can pass $2000 relief checks for the people," he wrote in another post, "but we have to win this Senate election."

Meanwhile, Loeffler, the part-owner of Atlanta's WNBA franchise, has shifted her approach to politics in the past year to align as much with Trump as possible and turn out his base. Loeffler, when she was first appointed to her seat in 2019, was chosen by Georgia Gov. Brian Kemp over the objections of Trump, who wanted Rep. Doug Collins, R-Ga., to replace retired Sen. Danny Isakson, R-Ga.

Loeffler has now said she will object to the certification of electoral votes for Biden on Wednesday and has called for the resignation of Georgia Secretary of State Brad Raffensperger — a Kemp ally — all while Trump has promised to campaign against Kemp in 2022.

"I have an announcement, Georgia. On Jan. 6, I will object to the Electoral College vote," Loeffler said at Trump's rally Monday. "This president fought for us, we're fighting for him."

Depending on how close the races are, it could be Wednesday or even longer before there are definitive winners. This is partially because of the number of mail ballots the state will need to count, which are more physically laborious to tally than traditional in-person ballots.

Georgia took several days before there was a definitive winner in the presidential race in November because the results were so close — Biden won by slightly less than 12,000 votes, a margin confirmed by multiple recounts. A similar situation is possible for the Senate races.