It is not unusual for companies to blame a scandal on one lone wolf. But powerful investment bank Goldman Sachs reportedly went one step further last year by telling US authorities that one of its former star bankers had received a mail-order PhD from a now-defunct university and was briefly married to two women at the same time.

In a series of PowerPoint presentations, reported by The New York Times but the accuracy of which Goldman has never confirmed, the bank allegedly used personal information to argue that Tim Leissner, who was accused of participating in a scheme that stole billions of dollars from Malaysia's 1MDB fund and has pleaded guilty to US charges, was "a man practised in the art of deception" and had the bank fooled. 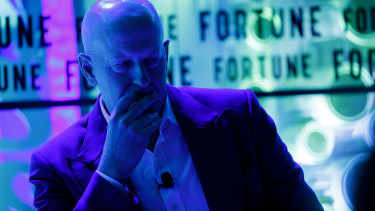 Goldman Sachs chief David Solomon and other executives are having their pay slashed by a total of $US31 million this year.Credit:Bloomberg

Its attempt to distance itself from the scandal by arguing that it was duped by one rogue banker has failed to do the trick. Record-breaking penalties and court filings published last week reveal damning details about the bank's culture just as it was beginning to revamp its image under David Solomon, its DJ-ing chief executive.

Hours before Donald Trump and Joe Biden's second and final presidential debate last Thursday (US time), the bank (sometimes dubbed "Government Sachs" for its political connections) admitted that its Malaysian subsidiary bribed officials with more than $US1 billion ($1.4 billion) in order to win lucrative work with 1MDB in 2012 and 2013. The US Department of Justice slapped it with its biggest fine in history for foreign corrupt practices.

International investigations into the massive fraud, in which billions of dollars of public money was stolen from the Malaysian fund and spent on yachts, a Picasso painting, celebrity parties and even funnelled into Hollywood film The Wolf of Wall Street, which stars Leonardo DiCaprio as a corrupt trader, has now cost the bank over $US5 billion in penalties. It earned $US600 million in fees for selling bonds on behalf of 1MDB.

Although Goldman has avoided a criminal conviction, the damage to its reputation will be long lasting and the timing is awkward. US prosecutors accused Goldman of chasing money "to the detriment of the people of Malaysia and the reputation of American financial institutions operating abroad", while FBI director William Sweeney added that "greed eventually exacts an immense cost on society".

That greedy narrative has haunted Goldman ever since the 2008 financial crisis. After the crash there was widespread public anger when so-called "Goldmanites" continued to rake in eye-watering bonuses and benefit packages, leading Rolling Stone magazine to famously compare the bank to "a great vampire squid wrapped around the face of humanity, relentlessly jamming its blood funnel into anything that smells like money".

Eager to overcome perceptions of greed and excess – City investor Guy de Blonay once wrote that Goldman's huge profits only months after the crisis reminded him of poet Jean Cocteau's line "we must believe in luck; for how else can we explain the success of those we dislike" – Solomon has spent his first few years in charge pushing through initiatives to make the bank seem softer and more human. The details of its involvement in 1MDB has undone much of that PR work.

As the coronavirus crisis weighs heavily on businesses and households around the world, the vampire squid has found money again. Profits were up 94 per cent for the three months to September following a near-record second quarter and Solomon, who this month sold his mansion in Aspen for $US26.5 million, said things were looking up for the rest of the year too. 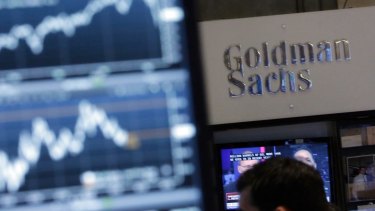 The bank is sometimes dubbed “Government Sachs” for its political connectionsCredit:AP

After admitting to "institutional failure" over the 1MDB affair this week, the two private jets recently ordered by the bank for Solomon and his aides are probably not the best look.

That's not to say those at the top have walked away from the bank's involvement in massive fraud with no more than hot faces. Bosses including Solomon and Richard Gnodde, its European chief, are having their pay slashed by $US31 million this year, while five former bankers including Lloyd Blankfein, the former chief executive, will forfeit a chunk of their performance-related share awards worth $US67 million. The bank said no past or current senior managers were involved in or aware of any illicit activity at the time.

However, court documents released by the DoJ this week show that various warning signs were ignored. Solomon admits that the bank "did not adequately address red flags and scrutinise the representations of certain members of the deal team".

In one example, an unidentified employee told a colleague that an official in Abu Dhabi was "trying to get something on the side in his pocket", which he found "quite disturbing".

In response an unknown senior Goldman executive replied, "what's disturbing about that? It's nothing new, is it?"

Other examples show how Goldman's compliance department flagged concerns about working with financier Jho Low, a consultant for 1MDB accused by prosecutors of leading the alleged heist. Low has denied wrongdoing and remains at large. In 2011 a compliance executive said "we have pretty much zero appetite for a relationship with this individual" adding that "this is a name to be avoided", while in 2013 the department said it would "like to shut this down once and for all".

According to the filings after he was rejected as a client, ex-Goldman banker Leissner, who has pleaded guilty to criminal charges, and Ng Chong Hwa, who has been charged with the same crimes, as well as others at Goldman, continued their relationship with Low and "used him to obtain and retain business for Goldman from 1MDB and others".

As the bank looks to move on, Solomon will hope he can find a way to finally convince the world the great vampire squid has changed its ways.