As expected, Mark Zuckerberg announced this week that Facebook — the company, not the under-fire social network — is changing its name to Meta, a move he said reflects an emphasis on a new computing platform called the metaverse.

Critics say it’s meant to deflect attention away from Facebook’s increasingly toxic reputation. And while Zuckerberg, who founded the company, is betting that turning the focus to virtual reality will ensure its future, such technologies are far from widely used. 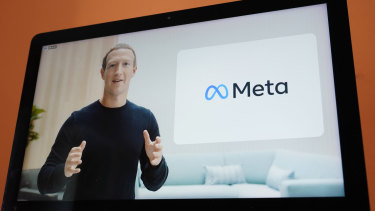 Moving on: Facebook CEO Mark Zuckerberg said his company is rebranding itself as Meta.Credit:AP

But what, exactly, is the metaverse? Tae Kim has a helpful explanation: “Think of it as a futuristic version of an always-on multiplayer video game where you can play, socialise or even run a moneymaking business in a realistic computer-generated environment.”

Whether Meta can separate itself from the broad, deep-seated problems brought to light by whistleblower Frances Haugen while facing accusations of misleading investors and the public about user growth and doubts about its efforts to fight hate speech and disinformation remains to be seen.

Here’s what Bloomberg Opinion columnists had to say ahead of the announcement.

There is no guarantee the final result won’t be a car crash. Just ask Gap, Tropicana Products and the UK’s Royal Mail service. Gap and Tropicana were much-loved brands that went for bold, “clean” rebrands that were instantly panned by the public before being reversed. In 2001, Royal Mail became “Consignia” at a cost of £2 million ($2.8 million) — abandoning 500 years of history, which then took 16 months to reverse. It’s bound to initially spark a firestorm of outrage and mockery.

But Zuckerberg and the rest of the company’s senior team will expect this as a rite of passage. If people are reminded of the metaverse every time the company is mentioned, that would be a step toward owning the space — and maybe even forgetting the past. – Parmy Olson & Ben Schott

If the metaverse play succeeds, there may not be any lasting need to respond to challenges such as filtering out fake news and hate speech, limiting data collection, making ad targeting more transparent — all these nasty, intractable, nagging nuisances that the recent release of the “Facebook Papers” has confirmed.

New challenges will replace these, and before the media and regulators get their heads around them, Mark Zuckerberg may be able to enjoy a run even more lucrative than in the social media era. — Leonid Bershidsky

Facebook today serves a different purpose than it did a decade ago, and would-be challengers like Snapchat and TikTok aren’t well-positioned to threaten the social media platform’s dominance with older users. To do that they’d probably have to change their products significantly to more closely resemble Facebook, perhaps turning off their core base of young people. — Conor Sen

The metaverse is fine as a side hustle, but in the real world where real people live, Facebook has been causing significant damage.

Facebook and its associated platforms are where COVID-19 conspiracy theorists and anti-vaxxers do some of their most productive work; where anti-democratic insurrectionists and right-wing thugs choreograph their next moves; where, as the Wall Street Journal reported, young girls develop eating disorders while other users, unchecked, post reams of abusive material “including harassment and incitement to violence,” where, as whistleblower Frances Haugen told Congress, conflicts between profits and safety are consistently resolved in favour of profits.

Rebranding a company mired in controversy is never a surefire cure for the maladies unspooling its operations or ravaging its reputation. And companies often adopt new names because of controversy, not because of some sweeping strategic upheaval requiring a makeover. — Timothy O’Brien

Putting aside the prospects of financial success with this big new platform, which don’t look good, Facebook’s hyperfocus on the metaverse right now reflects poor judgment by its management, and Mark Zuckerberg in particular. Evidence is mounting that Facebook pushes older people toward conspiracy theories and teens toward body issues.

Zuckerberg should be focused instead on carrying out the mother of all cleanup jobs: hiring thousands more staff, especially content moderators, to help target the harmful content on its site before building a new one that will deliver the same old problems. — Parmy Olson