Mr Murdoch abruptly resigned from the board of the company founded by his father Rupert Murdoch in August after years of expressing unease about the editorial direction of its mastheads which include The New York Post and The Australian.

In his first major public comments since then, he told The New York Times on Saturday (EDT) that he felt he could be more effective doing work outside the family company. 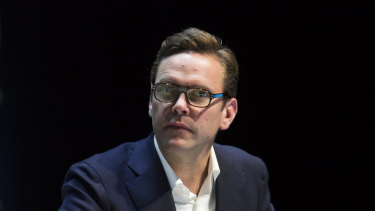 James Murdoch resigned from the News Corporation board in August.Credit:Bloomberg

“I reached the conclusion that you can venerate a contest of ideas, if you will, and we all do and that’s important," Mr Murdoch, the younger son of Rupert Murdoch, said in the interview. "But it shouldn’t be in a way that hides agendas. A contest of ideas shouldn’t be used to legitimise disinformation. And I think it’s often taken advantage of. And I think at great news organisations, the mission really should be to introduce fact to disperse doubt — not to sow doubt, to obscure fact, if you will."

Mr Murdoch and his wife Kathryn Hufschmid, who has worked for the Clinton Climate Initiative, have previously spoken publicly about their concerns with News Corp’s direction. In September last year Mr Murdoch told The New Yorker he strongly disagreed with many of conservative television network Fox News’ views and admitted that there were times where he and his father did not talk. Fox News is majority owned by News Corp.

When News Corp’s local news arm, which also publishes The Daily Telegraph and The Herald Sun, was criticised globally for its coverage of the Australian bushfire crisis in January, Mr Murdoch accused the global media empire of promoting climate denialism.

"There’s only so much you can do if you’re not an executive, you’re on the board, you’re quite removed from a lot of the day-to-day decisions," Mr Murdoch told The New York Times. “And if you’re uncomfortable with those decisions, you have to take stock of whether or not you want to be associated and can you change it or not. I decided that I could be much more effective outside.”

Mr Murdoch also admitted he had never watched Succession, a fictional HBO show that many consider to be inspired by his family.

The New York Times article about Mr Murdoch appeared on the same weekend that former Australian prime minister Kevin Rudd launched a petition calling for a royal commission into Rupert Murdoch's media empire. Almost 6000 people had signed the petition in less than 24 hours.

"A decade ago when my government produced one-fifth of the level of debt – one-fifth the size of [Prime Minister Scott] Morrison's deficit and still kept Australia out of recession – Murdoch day in and day out would abuse the news reporting to define us as bad economic managers," Mr Rudd said.

"Murdoch ceased being an independent media company and became effectively the Coalition partner of the Liberal/National Party, and they act as a protection racket for each other."