Migrants await capture at border, no agents to be found

Fox News correspondent Bill Melugin reports on the latest on immigration at the southern border.

House Republicans are asking Health and Human Services (HHS) for records of taxpayer funds spent on unaccompanied children coming across the border — after reports that more than $2 billion has been diverted to helping with the crisis.

“This catastrophe of illegal immigration is one of the administration’s making, and now it is up to all of us to work together to ensure the safety and welfare of U.S. citizens,” the letter to HHS Secretary Xavier Becerra, sent by 10 Republicans and led by Rep. Byron Donalds, R-Fla., said.

The lawmakers cited a Politico report that HHS has diverted more than $2 billion meant for other health initiatives toward caring for unaccompanied children crossing the border — including money for expanded COVID-19 testing and the nation’s Strategic National Stockpile.

An HHS spokesperson told the outlet that it has worked with the Office of Management and Budget (OMB) to keep the Office of Refugee Resettlement’s (ORR) unaccompanied children operation funded.

“All options are on the table,” he said. “This program has relied, year after year, on the transfer of funds.” 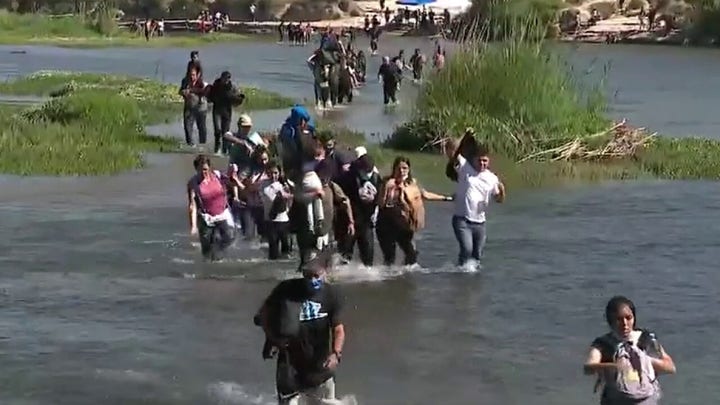 The administration has faced a surge in unaccompanied children, among a broader spike in illegal migration at the border. The number reached a record high in March, but has decreased to just over 10,000 in the month of May.

Meanwhile, packed Border Patrol facilities have been emptied, with minors moving to Health and Human Services (HHS) custody — where numbers increased to 22,000 in May, before dropping to 16,000 recently as official unite hundreds of minors each day with sponsors across the country.

While the Biden administration has sought to blame a lack of preparedness by the Trump administration combined with “root causes” in Central America, Republicans have claimed that the crisis has been exacerbated by the current administration’s policies.

“Every child on Earth deserves dignity and a safe place to live and grow, but it is the Biden administration’s policies that encouraging children to make the dangerous trek to our southern border,” the letter says. “This must end for the safety and security of these migrant children, the lives of whom your administration’s policies are putting at risk each and every day.”

The letter requests information on the amount spent on ORR’s unaccompanied children program, including beds, shelters and transport, as well as additional expenses outside of the program such as migrant housing and health/medical related activities.