Qantas boss Alan Joyce has a real knack for sharing the pain but capitalising on the gain.

When Qantas emerges from the COVID crisis, it will have picked up about 10 percentage points in domestic market share, slashed its staff numbers by a third and taken $1 billion out of costs. Its remaining workers will have a pay freeze and travel agents selling Qantas seats will see commissions cut from 5 per cent to 1 per cent.

And miraculously, the airline is now expected to produce profit (before depreciation) over the next couple of years that will be double that what it made before the pandemic. 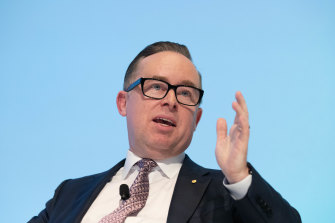 It’s fair to say Qantas represents the mother of all corporate comebacks, and Joyce has redefined that now-hackneyed phrase of ‘never waste a good crisis’.

The carrier expects domestic capacity will be running at 95 per cent of pre-COVID levels in the three months to June and fly 10 per cent ahead of pre-pandemic levels in the next financial year that begins in July.

Which means in the post-COVID world, Qantas’ domestic operations will have an expanded network, a leaner cost base and larger profits.

Joyce isn’t claiming full credit for the profit blue sky that analysts are now predicting will be evident by 2023.

He acknowledges (with barely hidden delight) he’s had some help from Qantas’ two domestic competitors Virgin and Rex. Virgin has abandoned the premium market and left many larger corporate customers with no option but to move across to Qantas. And Rex has joined Virgin in the mid-tier part of the market, leaving the two in a competitive battleground.

At the low-cost end of what is typically called the price-sensitive leisure market, Tiger (once owned by Virgin) has disappeared and left the Qantas-owned Jetstar without a real competitor.

Thus, if you subscribe to Joyce’s analysis of the market – the cards have fallen Qantas’ way, leaving him ‘watching from the sidelines’ (with relish) as Virgin and Rex do battle.

And despite all the massive marketing of cheap fares aimed at boosting passenger numbers, Qantas told analysts that over the past couple of months in particular Jetstar ticket prices have increased 3 per cent and Qantas domestic fares are up 1 per cent.

Qantas will still book a statutory loss of more than $2 billion in the year to June, but most of this was made in the December half. The prospect of a dividend isn’t on the agenda in the foreseeable future.

But Qantas now expects earnings before interest, tax, depreciation and amortisation in the June half to come in at $400 million to $450 million. In other words, it will have thrown off enough cash to begin paying down the $6 billion debt pile that was its COVID legacy.

This feat is made all the more remarkable by the absence of international travel.

Joyce is way more optimistic about the progressive re-opening of international borders than Prime Minister Scott Morrison. Sure, he was off the mark when he initially heralded June this year as the time for international liftoff, and was still too aggressive when Qantas began selling seats offshore for October. He has now marked his calendar for international jet setting for the end of December – which is still six months earlier than the government anticipates Australians will be able to travel offshore again.

But Joyce is even less ambitious about the opening of international borders than the head of travel agency chain Flight Centre, Graham Turner, who reckons Australians may be flying to the UK and the US within four to six months.

(Turner is also unperturbed by Qantas’ move to slash travel agent commissions. He says there will be plenty of other international carriers competing for business that will be willing to pay generous commissions. His sanguine attitude hasn’t been reflected in Flight Centre’s share price, however, which dived more than 8 per cent on Thursday morning and still traded down 2.6 per cent in the afternoon.)

Qantas was a bit vague on quantifying how much the slashing of travel agent commissions would save the airline – other than suggesting it would be in the tens of millions of dollars.

While its domestic operations are increasingly unlikely to be buffeted by COVID-related domestic border closure spot fires, the airline’s ability to resume its international operations rest with Australians’ willingness to be vaccinated.

When it comes to this, the combination of blood clot fears and complacency are Qantas’ chief enemy.