Many of us remember exactly where we were when we first realized COVID-19 was about to jarringly disrupt our lives.

For Seth and Scarlett Eskelund, the realization hit when they were in Sedona, Arizona, a 29-hour drive from home on the East Coast. The couple had just begun their full-time #VanLife journey two months prior, a goal they had been working towards since early 2019 when they first purchased a used van to turn into their own tiny home on wheels.

“It was pretty devastating for both of us,” Seth Eskelund told Insider in an interview. “It was a long time in the [car ride back home] to sit and think about it and go down Interstate 40 essentially the wrong way for what we had prepared for.” 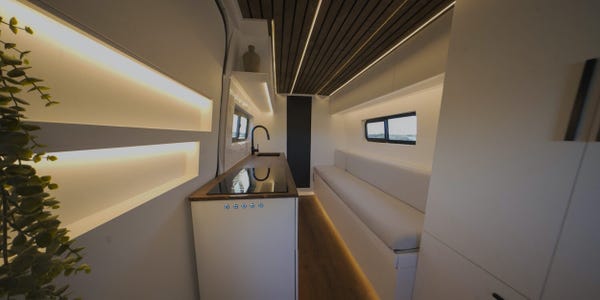 However, a glimmer of hope came out of this disappointment. Along the drive back home, the couple decided to pursue their plans of buying another used van to convert into a camper, an idea they had already been toying around with.

This decision then turned into Roah (pictured below), the couple’s first camper van conversion after returning home during COVID-19. The moment they completed and sold the van, the duo returned to the road and began heading up to Canada for the summer. 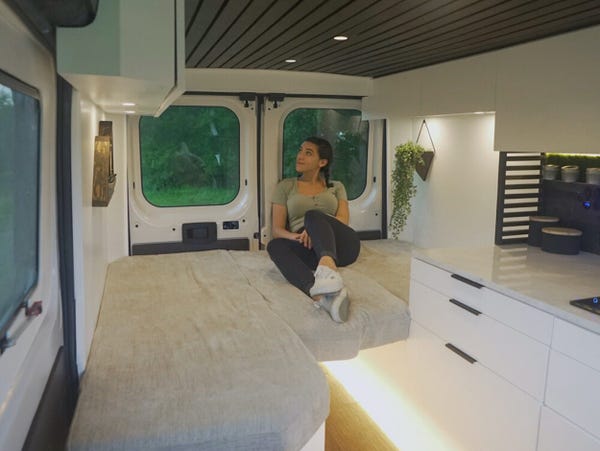 But as we all know now, the Canadian border closed, and the couple was again forced to return home. That was when they decided to convert another van, this time out of leased warehouse space. And as the cliche goes, the rest is history, and the couple has now built five vans, including the personal camper that’s been with them since the start of their van life journey.

“We joke that we’re just continually forced into this in the best way possible,” Scarlett Eskelund said.

Converting and selling vans is a necessity 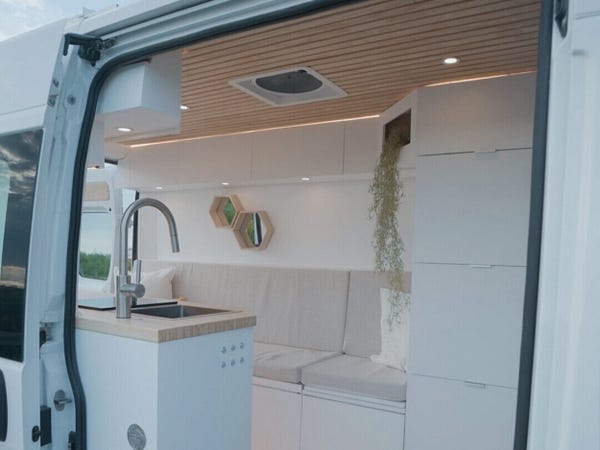 “If we don’t sell these vans, it’s over, not just for the business, but … we would have no money to get back out on the road and travel,” Scarlett Eskelund said. “Luckily I don’t think either of us harped on that too much, because I think if we did, we definitely wouldn’t have gotten into this.”

The pair’s 12 to 18-hour workdays grant them a rapid turnaround time. The first van they built in the warehouse, pictured below, was completed in 20 days — partially because the couple needed the financial support — and sold in three weeks. 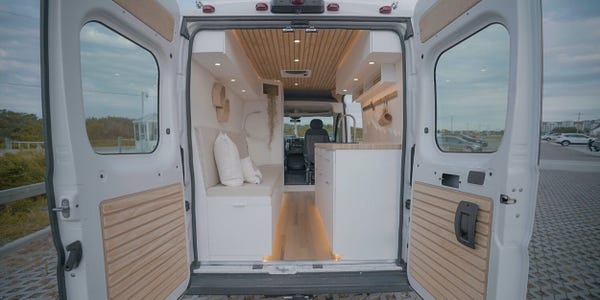 Ironically, that van was the longest it has ever taken the couple to sell a finished van. Their “list-to-sell” time normally sits at around two to three weeks, which Seth Eskelund says is “pretty quick.”

Relying on public interest after a van has been completed — instead of doing custom builds — may seem risky. But so far, this business decision has paid off with the help of the couple’s YouTube and Instagram presence, which have almost 70,000 subscribers and 21,000 followers, respectively. All of the couple’s buyers have found their vans through Instagram, where the Eskelund’s will do daily check-ins on their in-progress vans.

Within two to three weeks after a camper van sells, the pair will have another used van in the garage, ready to convert again.

Their pricing methods aren’t an industry-standard, but that’s the point 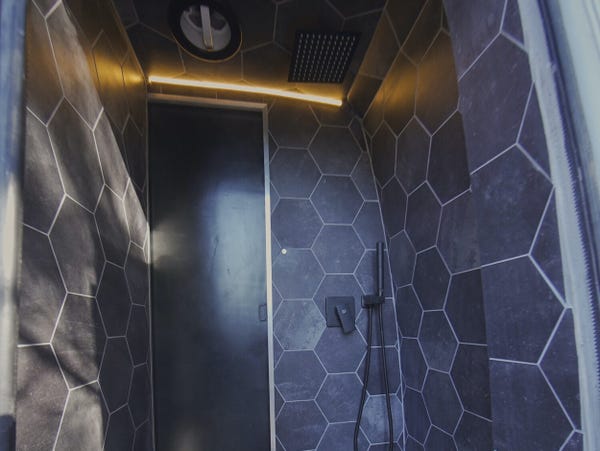 The Eskelund’s camper vans have been a hit with customers because of their prices, according to the couple. Their tiny homes on wheels can range from a weekend warrior van to a built-out unit with a shower and toilet. But no matter the amenities, the couple aims to price “very fairly” and below the current market rate, which can often run high.

Camper van conversion companies and RV makers have seen a boom in sales as more people have turned to road travel during COVID-19. But as a result, the camper van market has been price gouging, sometimes to the tune of an additional $60,000 to $70,000 compared to 2019 prices, according to Seth Eskelund. But when pricing their own vans, the couple doesn’t want to take this route, and instead opts for a price tag that’s less than the general market.

From the start, the couple’s goal was to convert vans to give them something to focus on during the coronavirus pandemic. The point was never to become wealthy from the business: instead, they wanted to break even or just make a small income.

“It’s a lot more than just a business and money for us,” Seth Eskelund said. “I would say we are as personally invested in the vans as we are in the business, and maybe that’s not smart from a business perspective on us, but that is who we are.” 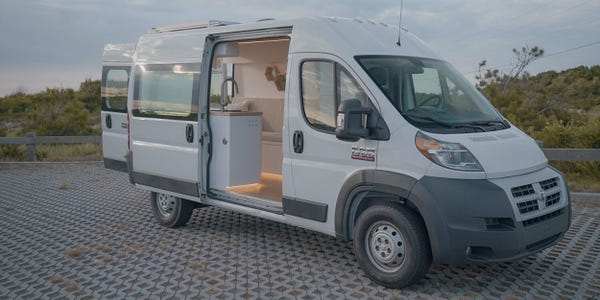 The pair factors in several aspects when pricing the van, including its mileage, the cost of purchasing the initial used van, and build specifications. This then leads to a price range of anywhere between $30,000 to $90,000, which is far cheaper than builds from companies that have an almost $300,000 tag.

There’s also the added bonus of ad revenue from their YouTube videos, which allows the couple to subsidize their prices while educating the public about how to DIY a camper van.

“Obviously there is demand and a lot of supply as well, but I think that’s been a factor in why we sell quickly because we really do try to price as fairly as we can,” Seth Eskelund said.

As Scarlett Eskelund describes it, this is both a lifestyle and a business, giving the couple fluid “accessibility.” When the COVID-19 pandemic is over, the pair will continue their business for as many months out of the year as they would like. For all the other months, they’ll resume their #VanLife dreams.

“It’s a means to an end,” Scarlett Eskelund said. “It allows us the ability to do what we really want to do.”