Hope has faded quickly for a handful of Western companies eager to recover planes leased to airlines in Russia, with authorities there intent on keeping foreign-registered aircraft within the country and President Vladimir Putin openly discussing nationalising the assets of foreign businesses.

As of Thursday, there were 523 aircraft leased to Russian carriers by companies outside the country, according to IBA, a consulting firm. Of those, 101 are on lease to S7 Airlines and 89 to Aeroflot. Both airlines have stopped flying internationally, eliminating any chance of repossessing the planes on foreign soil. 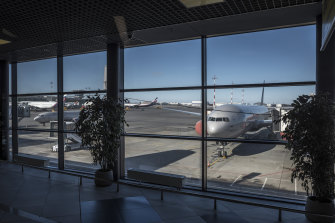 The stranded planes have a collective value of more than $US12b. Credit:The New York Times

“The general consensus is: That’s it, we will not be able to recover them,” said Vitaly Guzhva, a finance professor at Embry-Riddle Aeronautical University.

Guzhva and others who attended a recent industry conference in San Diego said the predicament for the leasing companies was the talk of the event, held by the International Society of Transport Aircraft Trading. Experts there generally aligned around the view that the companies were facing the possibility of huge losses, they said. All told, the planes are worth as much as $US12 billion ($16.5 billion), according to Ishka, an aviation consulting firm.

AerCap, the world’s largest leasing company for commercial aircraft, has 142 leased planes in Russia, more than any other company, according to IBA. AerCap declined to comment, but said in a recent financial disclosure that its aircraft in Russia account for about 5 per cent of its fleet. SMBC Aviation Capital, which did not respond to a request for comment, is the second-most exposed business, with 35 leased planes in Russia.

Under European sanctions, lessors such as AerCap and SMBC, which are based in Ireland, have until March 28 to terminate contracts with the Russian airlines and get their planes back.

On Thursday, David Walton, chief operating officer of BOC Aviation, a leasing company based in Singapore, said the March 28 deadline was “frankly an unrealistic timetable” to get hundreds of planes out of the country. As of late February, Russian airlines were using 18 BOC-owned aircraft, or about 4.8 per cent of the company’s fleet.

Nick Popovich, whose Indiana firm, Sage-Popovich, performs aircraft repossessions, said he had been contacted by some major global lessors interested in recovering their planes from Russia. He declined to name the companies, but said they mostly acknowledged that it was a lost cause. Popovich said he was still investigating what could be done, but didn’t immediately see a viable way to recover the planes.

“We won’t accept an assignment that we’re not sure we can do,” he said. “I’m still doing research on what we can and can’t do legally.”

While a few planes may have been recovered abroad before international flights were halted, they are of little use to their owners without the meticulous maintenance records that accompany every aircraft and are often stored by airlines themselves, experts said. And the longer a plane is stuck in Russia, the greater the concern that work on the jet’s body, engines and flight systems may not be logged, causing its value to plummet. 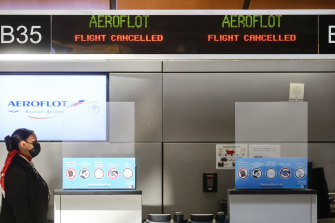 “Unless you have those records, the aircraft is virtually worthless,” said Quentin Brasie, founder and CEO of ACI Aviation Consulting. “They’re literally more important than the asset itself.”

The financial consequences of the planes’ being held in Russia could be far-reaching, too. Such aircraft are financed in a variety of ways, including funding from banks, leasing companies themselves, and investors in securitised debt.

Insurers and reinsurers may be on the hook, too, experts said. Aviation war insurers, in particular, are concerned and facing their biggest potential losses since the Sept. 11 terrorist attacks, according to Russell Group, a data and analytics company. Aircraft insurance premiums have been on the rise for years as the industry struggled to counter recent annual losses.

As prices went up during the pandemic, insurers cut coverage, according to Suki Basi, founder of Russell Group. At the least, the situation in Russia will probably have a similar effect.

“You pay more and you get less coverage,” he said. “If it does nothing to premiums, it will do that.”

“The general consensus is: That’s it, we will not be able to recover them,”

There will be lasting consequences for Russia, too. The crisis is likely to drive up the cost of doing business there generally and may cause some leasing companies and insurers to swear off the Russian market.

And while nationalising the planes may provide a short-term benefit to Russia in keeping domestic flights moving, it won’t be long before carriers there grow desperate for spare parts. With Boeing and Airbus refusing to offer parts and support to Russian airlines, those carriers are likely to start cannibalising the planes they have on hand, devaluing those aircraft.

Ken Hill, who also performs aircraft repossessions, knows that first hand. Two years ago, a U.S. leasing company hired Hill to recover three Boeing 737s at a small airport just outside Moscow, he said. The owner of the company that had leased the planes resisted his efforts to recover them, he said, but, after a few days Hill gained access to the hangar — only to find that the aircraft had been gutted.

“The airplanes were there, but guess what wasn’t there? The engines,” he said. “They had robbed all three airplanes. They were basically just junk carcasses.”