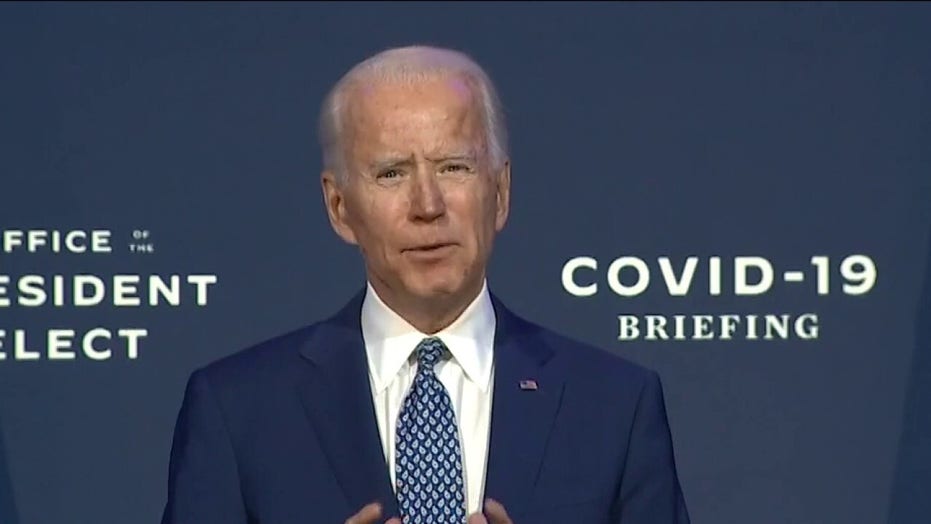 Ingraham: ‘Ordering’ Americans around with COVID mandates will ‘backfire’

In her "Ingraham Angle" monologue on Monday, host Laura Ingraham responded to President-elect Joe Biden's call to unite the country by way of a potential national mask mandate — as well as his announcement of a coronavirus response task force similar to the one President Trump has utilized.

Ingraham noted how Biden said wearing masks is a good way to start "pulling the country together," and objected to the sentiment.

"Get it? The more you hear these guys talk about COVID, the more it sounds as though their perspectives are truly political — entirely political."

Ingraham said most Americans are accepting and often interested in cooperating on public health measures when they have an empirical effect on helping the situation at hand — but that a line is drawn when efforts become overtly political."

"They are not going to give up their traditional liberties and part of a political effort to start pulling the country together. They have been tearing the country apart for the last three years," she said.

She noted that Democratic activists and supporters spent much of the weekend in condensed crowds celebrating Biden's projected win — "No COVID there."

Nodding to the prospect of a likely divided government, Ingraham disagreed with the contention that Biden and his political allies have received a mandate for political partisanship, but rather cooperation.

"For months now I have made it clear that COVID is a national tragedy that should have been something that brought us all together. Instead, Democrats used it as a political weapon. It was effectively Joe Biden's running mate. Now the election is over. A vaccine is on the way. And they are still using it," she said.

"What was Biden's phrase? Start pulling the country together? Sorry, Democrats. You don't have that kind of power. If you want to pull the country together, I'd suggest you start treating the rest of us as free and equal citizens. Ordering us around or trying to will only backfire."