The head of supermarket giant Coles has warned inner-city retail could be seriously weakened by COVID-19 for years as fewer workers, students and tourists flock back to CBDs across the country.

The retailer was seeing a stark contrast between its Victorian stores during the state's stage four lockdown, with trade at suburban stores soaring 70 per cent while it had halved in the city centre, Coles chief Steven Cain told The Age and The Sydney Morning Herald.

"We're seeing a massive change by store, and of course we're in a lucky position being a chain, but if you had one store and it was in the CBD, it would look pretty difficult," he said.

That difficulty was likely to persist for as long as the next five years, Mr Cain said, as many workers continue to work from home instead of trekking to the office and it was unclear to what extent students would come back to inner-city living, and when tourists would return. 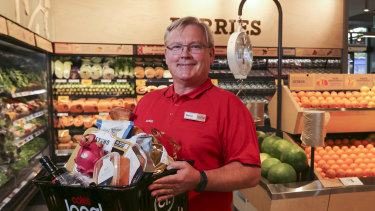 "The CBD situation is is is going to be pretty difficult for some time to come," Mr Cain said. "If people are doing one or two days from home a week, you're halving the number of people working in the CBD."

"Students also fuel a lot of the [CBD] economy, and it's not clear to me how many of those will return, or how quickly. And the final thing is obviously tourist trade, it could be years before we see that back in full swing."

"So [inner-city trade] could be difficult for the next five years unless there's a concerted effort to accelerate that or find other sources of income."

The $23 billion retailer has 11 stores in inner-city locations across the country, while rival supermarket Woolworths has 32. Both have made concerted efforts to expand their convenience offerings at supermarkets, and have been trialling a number of small-format inner-city stores in recent years.

Expansion plans for those areas may now be dampened by shoppers' inner-city exodus, though growth at the supermarkets' suburban neighbourhood stores have more than picked up the slack.

Both supermarket chains are also gearing up for "a Christmas like no other", as thousands of Australians who may have otherwise eaten out or visited relatives gear up for celebrations at home.

Mr Cain said he believed this Christmas would be a big event despite the virus and the persisting economic downturn.

"I think we'll have a better Christmas than we did Easter, which was a bit of a damp squib," he said. "I think we're all anticipating that we won't be able to have a big party but there'll be lots of smaller gatherings."

"There will be a lot more Victorians in Victoria this Christmas than we've had in the past, so I think we're expecting a good Christmas."