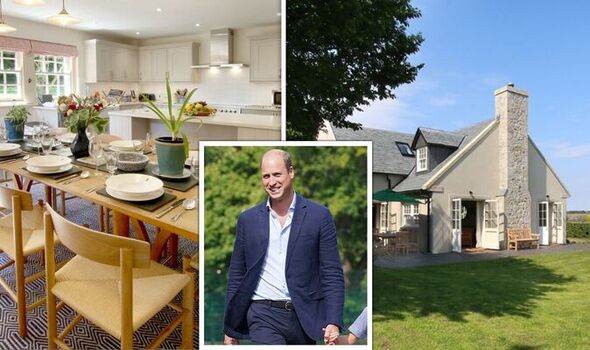 Tamarisk House is an idyllic property located on the Isles of Scilly off the coast of Cornwall. A Duchy of Cornwall property, Tamarisk House now comes under the remit of the newly-appointed Prince of Wales, Prince William, but it previously belonged to the former Prince Charles.

The doors of Tamarisk House have now been thrown open for the public to enjoy.

But King Charles would reportedly visit Tamarisk with his ex-wife Princess Diana and their children Prince William and Prince Harry when they visited the area.

Tamarisk House has been billed as the “new flagship addition” to the Duchy of Cornwall’s collection of Isles of Scilly holiday homes.

From the plush living room, guests are offered stunning views of the surrounding blue sea and green gardens.

The house also has plenty of entertainment options including a TV, Roberts Radio, DVD player and board games.

Photos inside the property show a fully-equipped kitchen and seating area, while outside there is the option for al fresco dining.

The Duchy of Cornwall website said the kitchen has an “electric range cooker with ceramic hob, an American-style fridge freezer, dishwasher, TV and full range of modern cookware, crockery, glassware and cookbooks”.

DON’T MISS:
‘I was miserable’ – Fergie shares how she ‘lost close to 50 pounds’ [INSIGHT]
William ‘feeling weight of divided loyalties’ ahead of World Cup [ANALYSIS]
Princess Kate’s engagement ring is similar to Anne and Eugenie’s [PICTURES]

There is also a utility room with a “sink, washing machine and tumble dryer”.

In one of the bathrooms, there is a double sink and a free-standing bath is the centrepiece of the room.

The property is exquisitely decorated, with nautical and natural photos dotted on walls throughout.

Tamarisk is surrounded by private gardens, and there’s even a barbecue for guests who fancy some outdoor grilling.

For those looking to book the magnificent property for a holiday, slots for November, December and January were mostly booked up at the time of writing.

The popular home is also fully booked throughout July and August 2023, but some remaining dates are available in June and September for a summer getaway.

Prices fluctuate depending on the season, and seven nights from February 9 to 15 would set back holidaymakers £1,450.

Other Duchy of Cornwall holiday homes on the Isles of Scilly include The Guard House and Gatehouse Cottage.

Other Duchy of Cornwall properties are available to rent throughout Cornwall.