Clean energy company Sun Cable’s project aiming to send solar-powered renewable energy via an undersea cable from the Northern Territory to Singapore has been declared “investment ready” by Infrastructure Australia.

Backed by Atlassian founder Mike Cannon-Brookes and Fortescue’s Andrew Forrest, Sun Cable is vying to build the world’s first intercontinental power grid supplying renewable power. The company forecasts the project to deliver around $8 billion worth of investment into Australia and generate $2 billion in export revenues within six years. 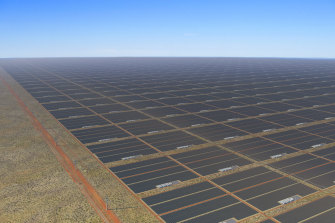 The Sun Cable project is forecast to deliver around $8 billion worth of investment into Australia and generate $2 billion in export revenues within six years.

Sun Cable wants to begin construction on the Australia-Asia Powerlink, which will run mostly through Indonesian waters, in 2024 and begin supplying electricity from the Northern Territory’s Barkly region to Darwin in 2027, with full operations to Asia by 2029. The 4200-kilometre-long cable would run underwater.

Sun Cable wants to create a minimum 800 megawatts of zero-carbon electricity for the NT abating 2.6 million tonnes of emissions and is projected to create 2000 direct jobs and spur the creation of 12,000 jobs indirectly.

It has the potential to supply up to 15 per cent of Singapore’s total energy needs via a 2,000-hectare solar farm in the NT.

Anthony Albanese has repeatedly lauded the project as an example of the clean energy economy he wants to oversee as Prime Minister.

He welcomed the Infrastructure Australia confirming the project’s economic merit.

“Sun Cable is an exciting project,” he told The Sydney Morning Herald and The Age.

“Australian can be a renewable energy superpower if we seize the opportunities that are right before us.” 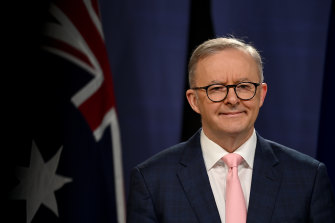 “Australian can be a renewable energy superpower if we seize the opportunities that are right before us.“: Prime Minister Anthony Albanese.Credit:Bianca De Marchi

Sun Cable’s founder and CEO David Griffin said that the project could now raise the billions it needs to be underway in just two years time.

“Today’s announcement by Infrastructure Australia affirms that the AAPowerLink is economically viable and will deliver significant benefits for Australia and our region,” he said.

“The AAPowerLink will enable a stronger economy for the long term through contracts, wages and economic diversification.

“It will spur enhanced capacity and skills in the construction and technology sectors as a result of jobs and training over the lifetime of the project, and pave the way for new green industries to be established, and to thrive,” he said.