APPLE has announced its first 5G iPhone during a virtual event recorded at its headquarters in California.

The iPhone 12 series is out soon and promises breakneck connection speeds and a revamped camera system. 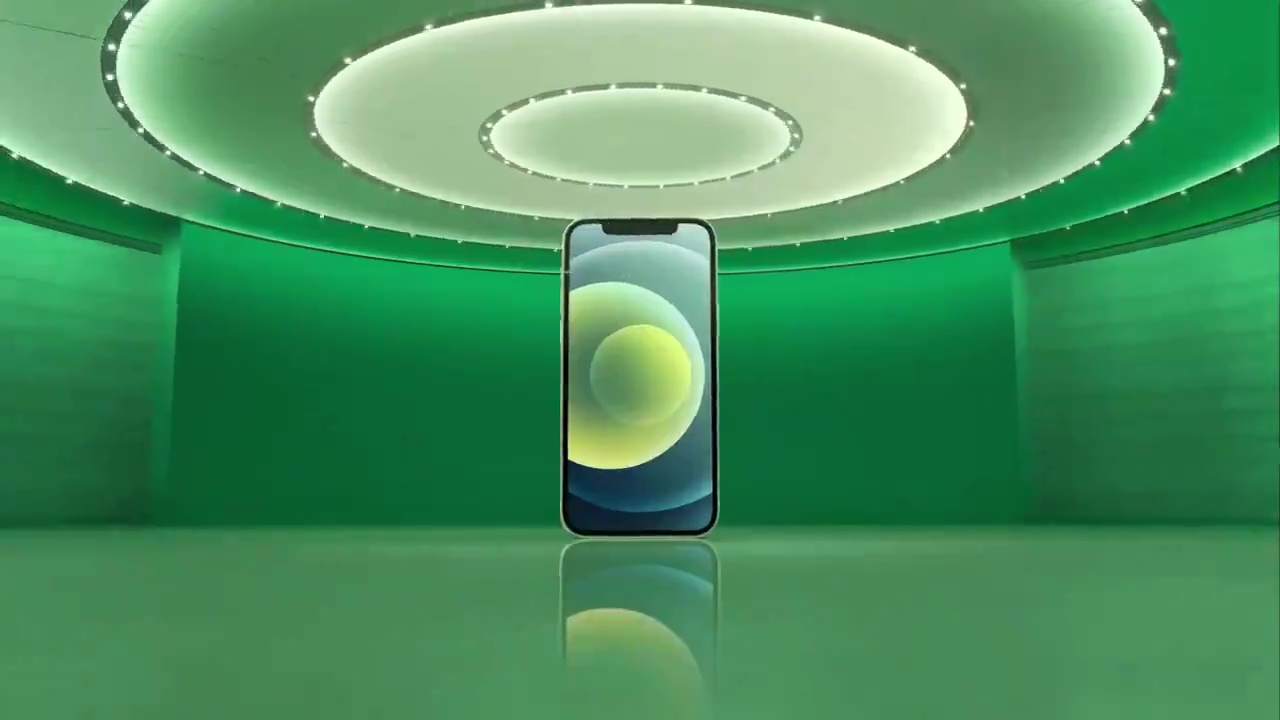 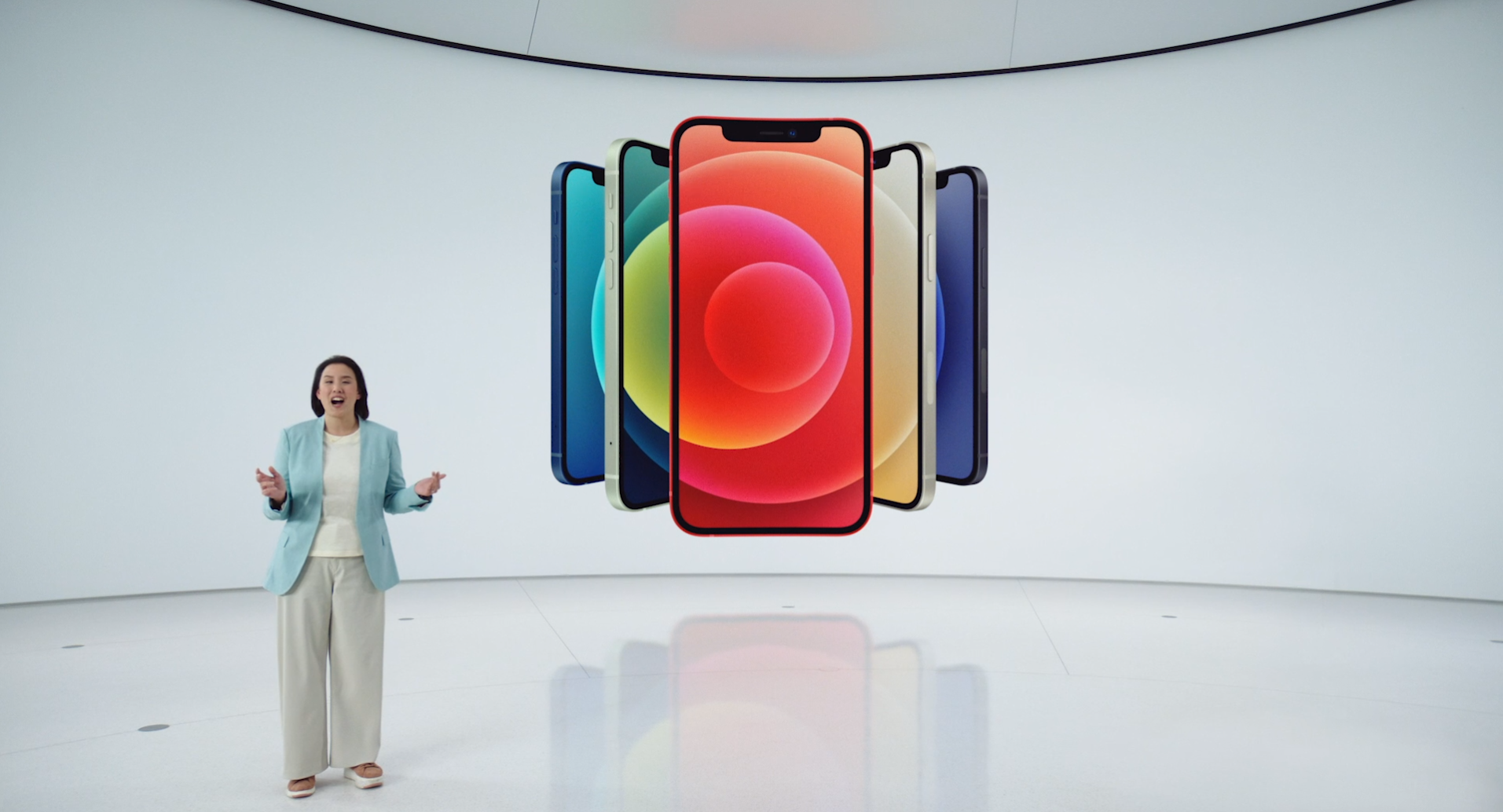 Apple is still describing the devices as part of its livestreamed "Hi, Speed" showcase, but we'll update this piece as we know more.

New iPhones – What are they?

The iPhones 12 series make up the latest and greatest smartphones from California tech titan Apple, and are the company’s first to come with 5G connectivity.

Apple boss Tim Cook said: “Today is the day of a new era for iPhone. We’re bringing 5G to iPhone.”

He added that 5G “will bring a new level of performance for downloads and uploads.”

In total, Apple announced four new mobiles during its October 13 “Hi, Speed” event, which was streamed live to fans around the world from its Apple Park headquarters. 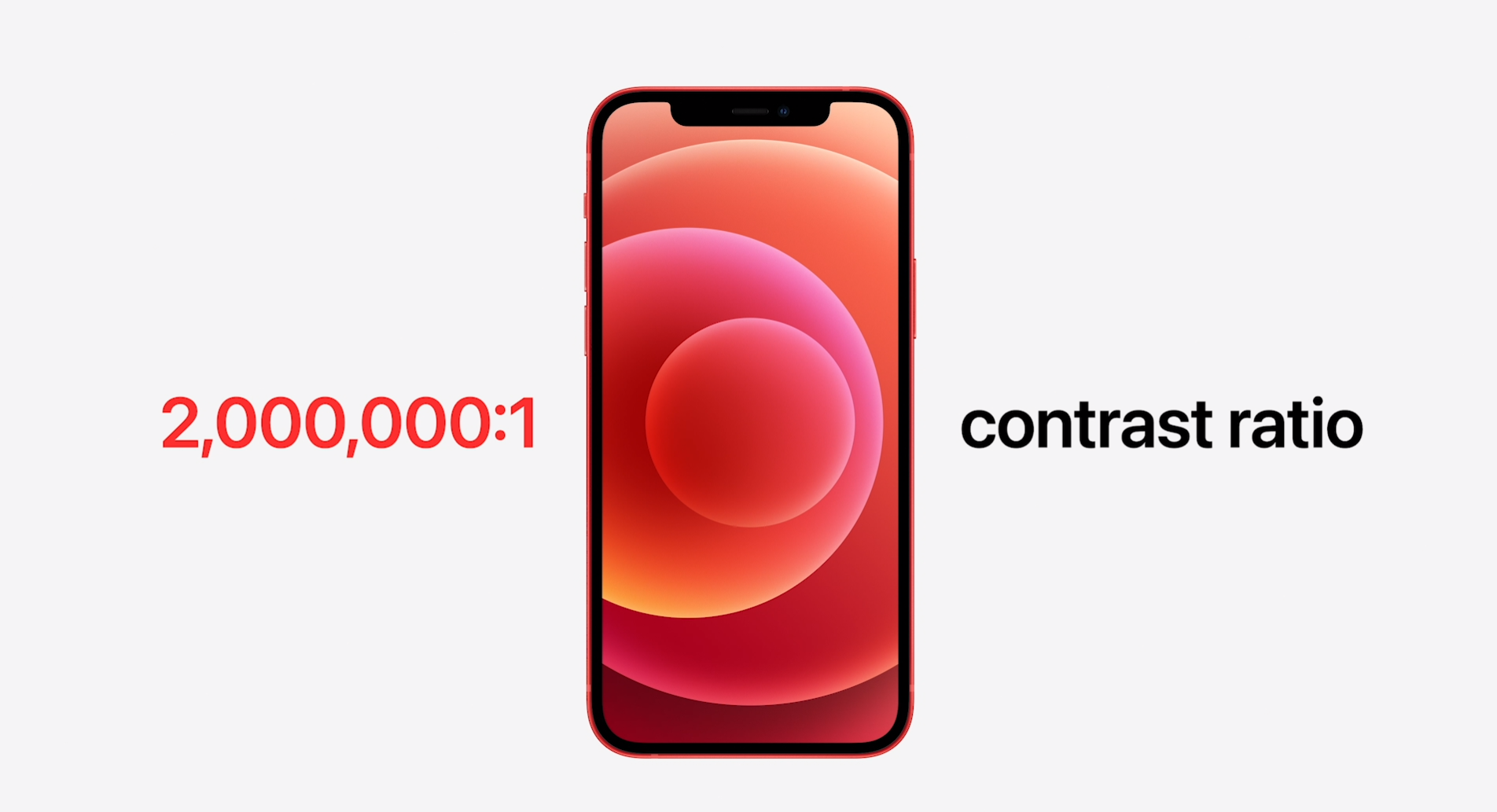 Apple has gone a bit “retro” with its latest mobiles after three years of sticking to a very similar design.

The company has opted for a distinctive, stainless steel frame that is reminiscent of the iPhone 4 and most recent iPads.

It gives the phones a squared-edge look that is a far cry from the glassy, pebble-like designs of recent years.

Of course, none of this will matter to most people, as they’ll be slapping a case on their pricey new handset at the first opportunity. 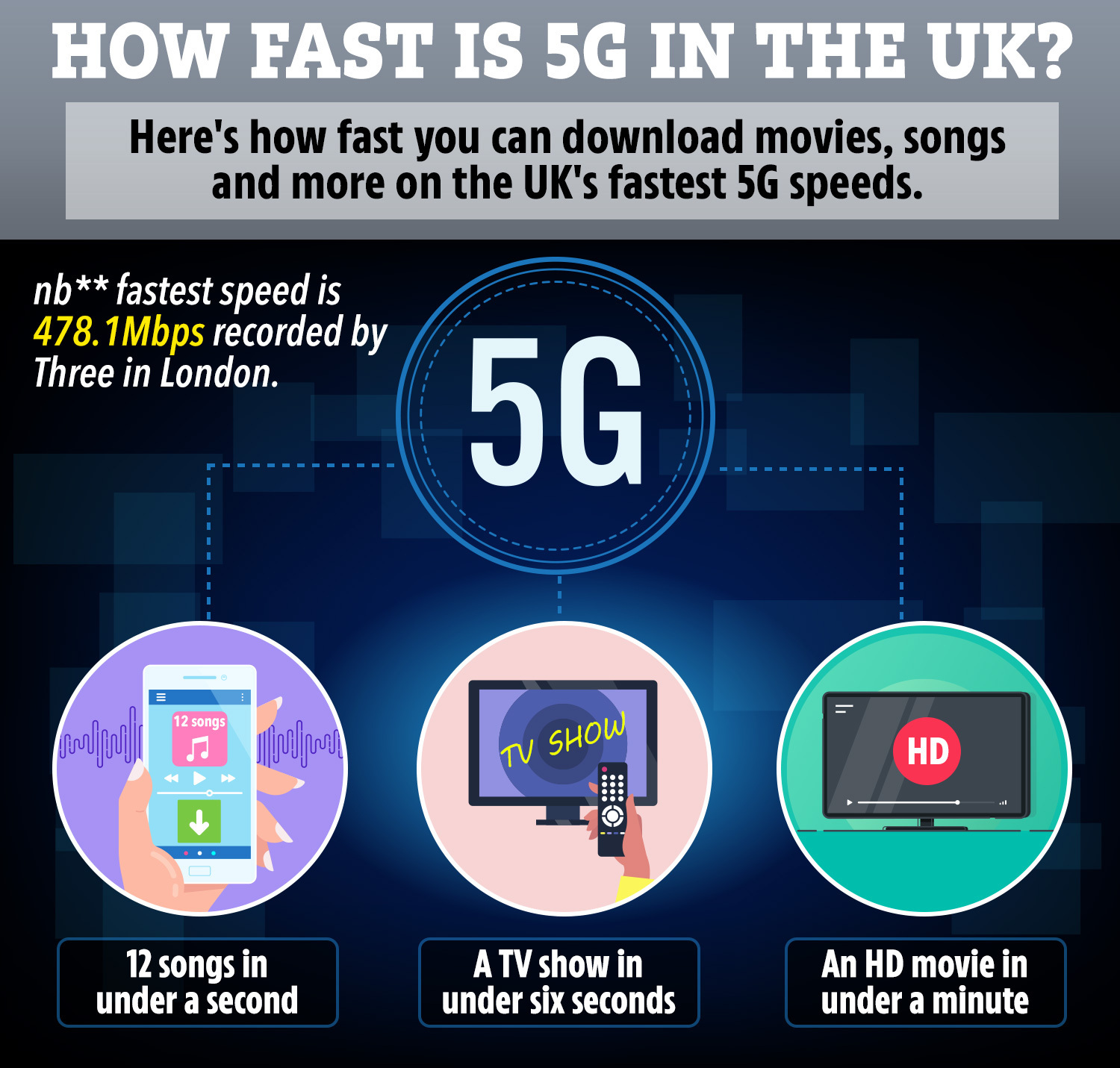 The iPhone 12 series' headline new feature is 5G connectivity, which is loaded into all four of the new mobiles.

It’s the next generation of mobile technology already loaded into top-end smartphones from the likes of Samsung, Huawei and Google.

While it’s only available in select cities in the US and UK for now, 5G promises breakneck mobile data speeds that allow you to download an HD movie in seconds.

Effectively, 5G boosts the upload and download speeds of your phone, making watching Netflix, playing games, or uploading Instagram snaps much, much faster. 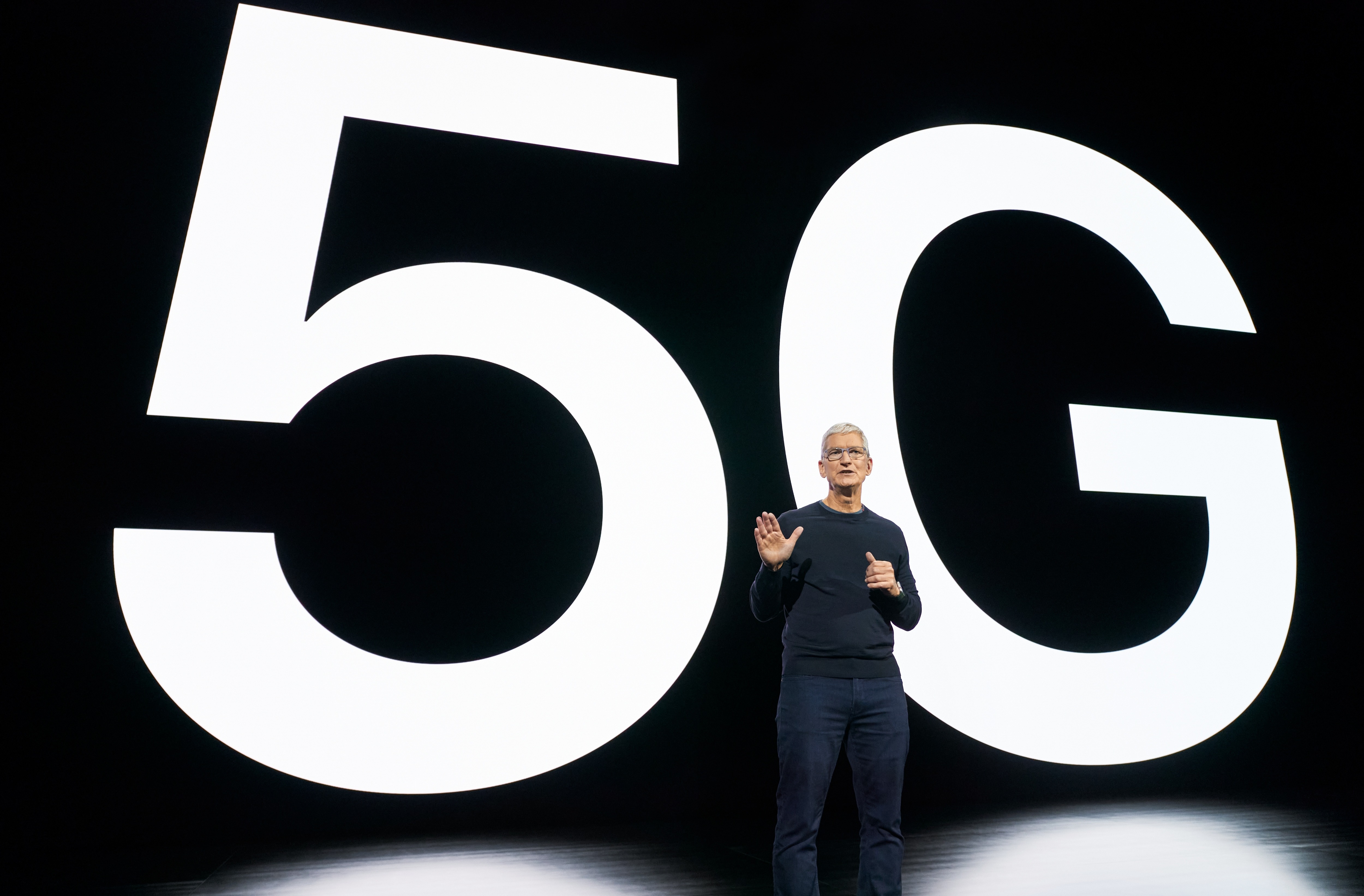 Is 5G available in your part of the UK?

READY to upgrade to super-fast 5G internet? You can easily check if you’ve got a 5G mast in your area.

Firstly, it's important to remember that 5G is completely safe, and can't give you cancer or coronavirus.

Scientists have also debunked claims of "deadly 5G radiation", so enjoy your speedy internet in peace.

EE has rolled out 5G in 112 cities and large towns across the UK.

However, it won't be available in every single part of those towns and cities.

You can find out if EE's 5G is in your area here.

Three claims to be building the UK's "fastest 5G network".

And Three is automatically upgrading 4G customers to 5G internet free of charge.

You can check for Three's 5G coverage in your area here.

O2 has sent 5G live in areas within 30 towns and cities.

And the network has pledged to reach a total of 50 locations by summer 2020.

You can check for coverage in your area here.

Vodafone is offering 5G internet in 41 locations across the UK.

And it says you can also access 5G in 70 locations across Germany, Spain, Italy and Ireland to boot.

You can check for Vodafone 5G network coverage here. Just make sure to hit the "5G" tab on the side of the map.

In order to connect to a 5G tower, you need a 5G compatible mobile. The iPhone 12 series are Apple’s first heandsets to do so.

According to Apple, the iPhone 12 series connects to the most 5G bands in any smartphone, allowing it to work in more 5G areas.

A new "smart data mode" will see the phone automatically switch between 5G and LTE – depending on which is available – to save battery.

Apple called the iPhone 12 the best 5G experience on any smartphone. 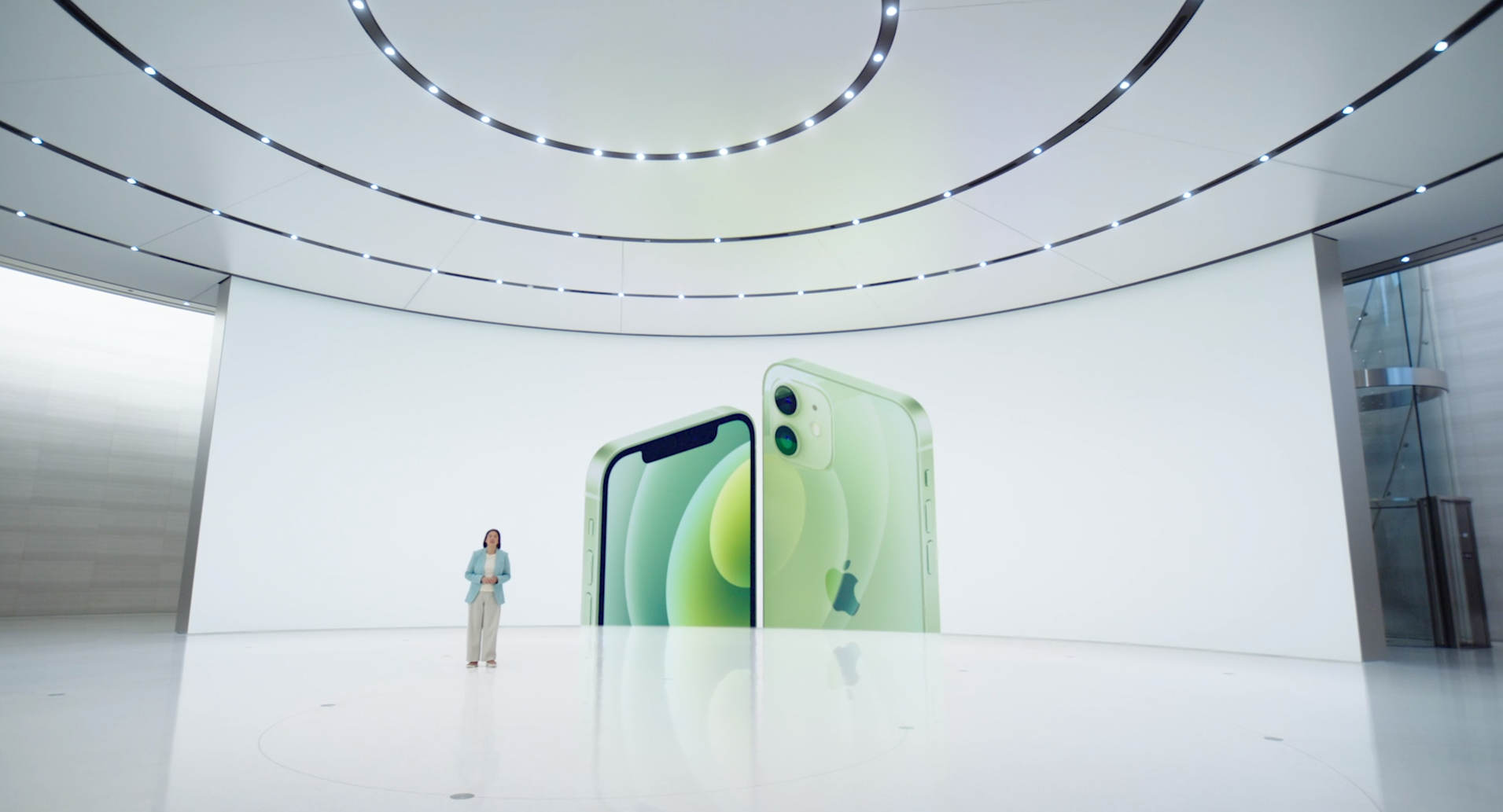 Apple has teamed up with Corning to create a custom screen called “Ceramic Shield” that makes it exceptionally tough.

In fact, Apple says it's the toughest smartphone in the world, with 4x better drop performance – apparently. 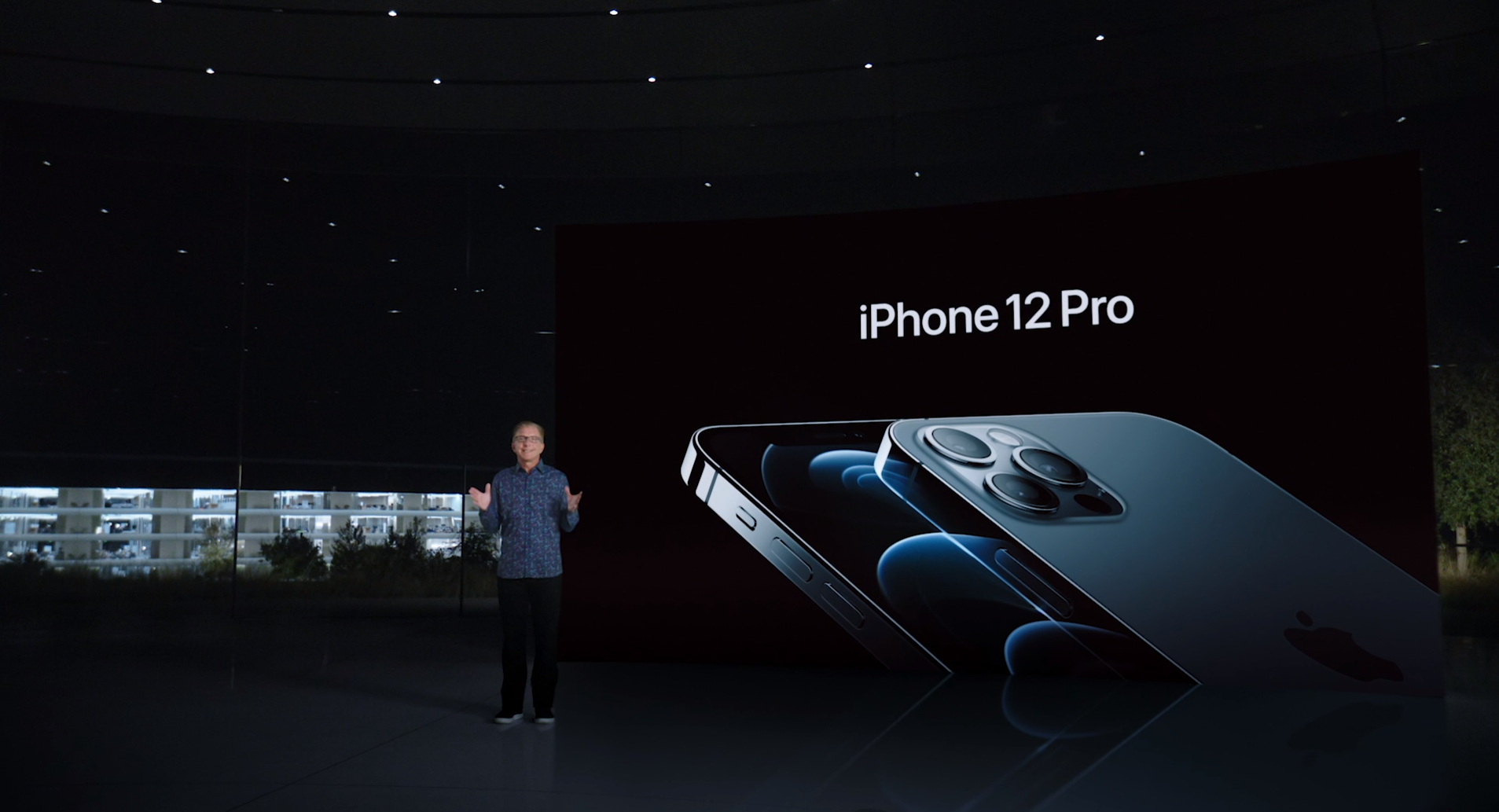 Apple also announced a number of improvements to the iPhone’s camera system.

The iPhone 12 Pro comes with three cameras on the back: A 12MP main snapper, as well as 12MP telephoto and 12MP ultrawide lenses.

Apple has upgraded the ultrawide and telephoto lenses compared to last year's mobiles.

Users can also snap telephoto shots in Night Mode – a feature previously only available in the main camera – and wider ultrawide snaps.

Night Mode was introduced with last year’s iPhones and helps you take better photos in the dark. 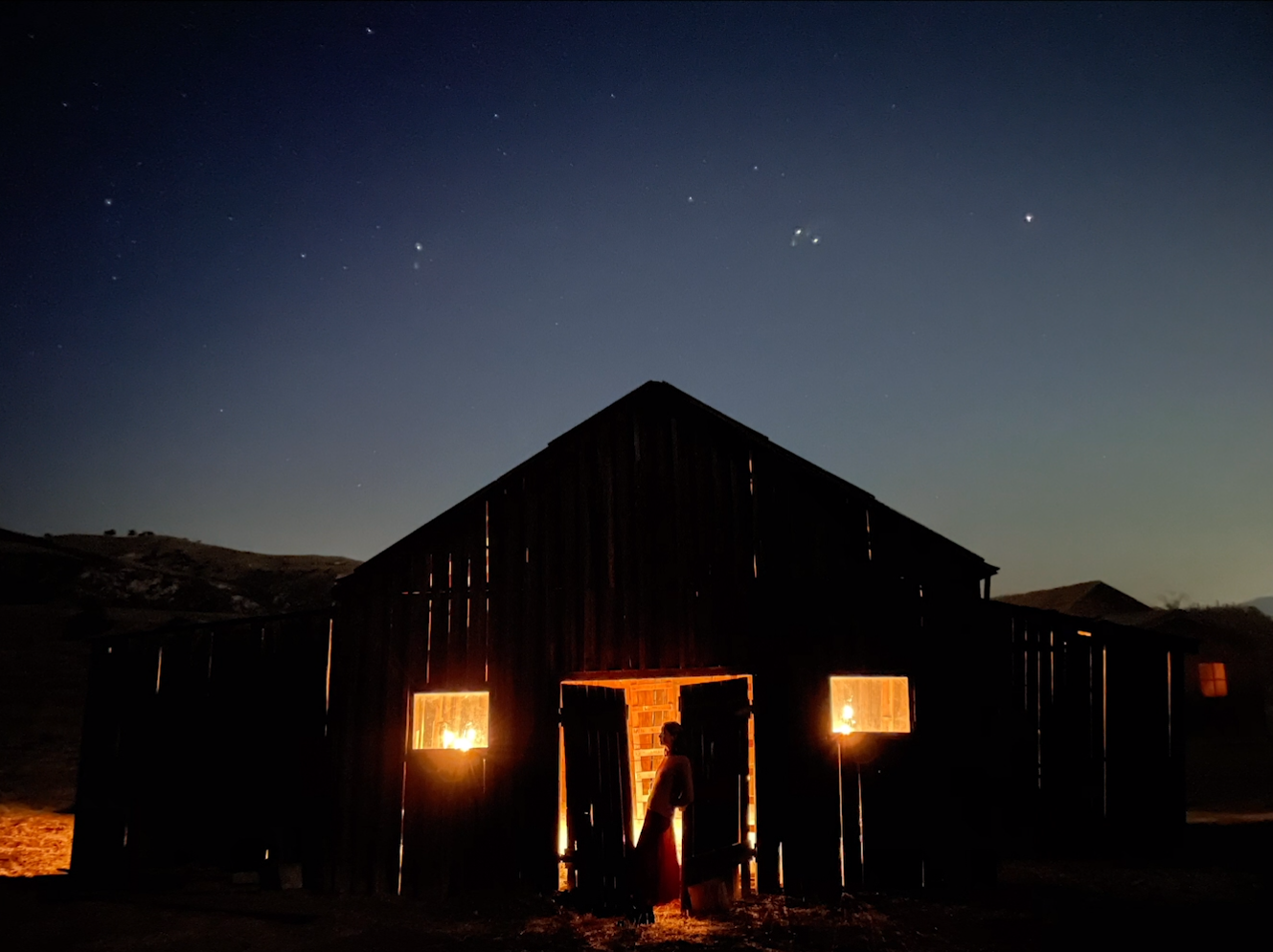 It’s clear right away that the Max camera is definitely better than the Pro camera, which wasn’t the case last year.

The iPhone 12 features a dual rear camera system on the back.

It's got a 12mp main camera and an ultrawide lens.

Apple said the mobile also features Night Mode – the AI-powered technology that lets you take great photos in the dark.

Apple's top models include a LiDAR scanner, which has loads of benefits.

It measures how long it takes reflect light back, enabling room- and object-scanning.

LiDAR stands for Light Detection and Ranging, and is a remote sensing method that uses a pulsed laser to measure range.

Typically used by self-driving cars to sense the world around them, the tool assists with augmented reality features. 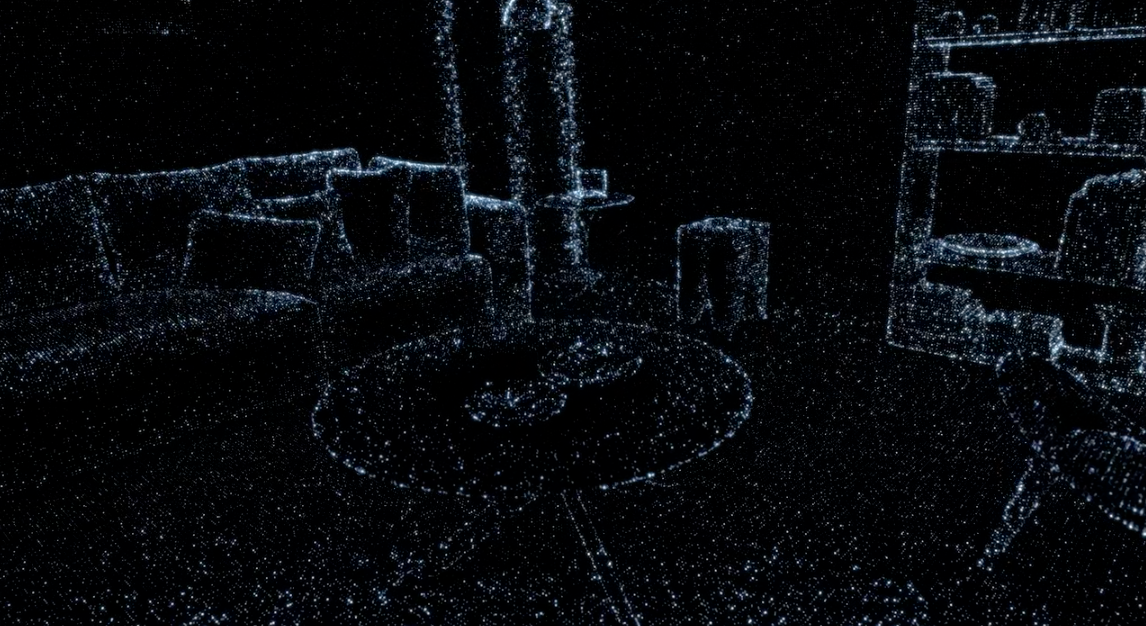 That’s when your phone overlays computer images on the camera – like with Pokémon Go or Snapchat filters.

But it can also be used for much more complicated AR apps too.

And Apple is using it to improve photography too, including making autofocus in low-light 6x faster. 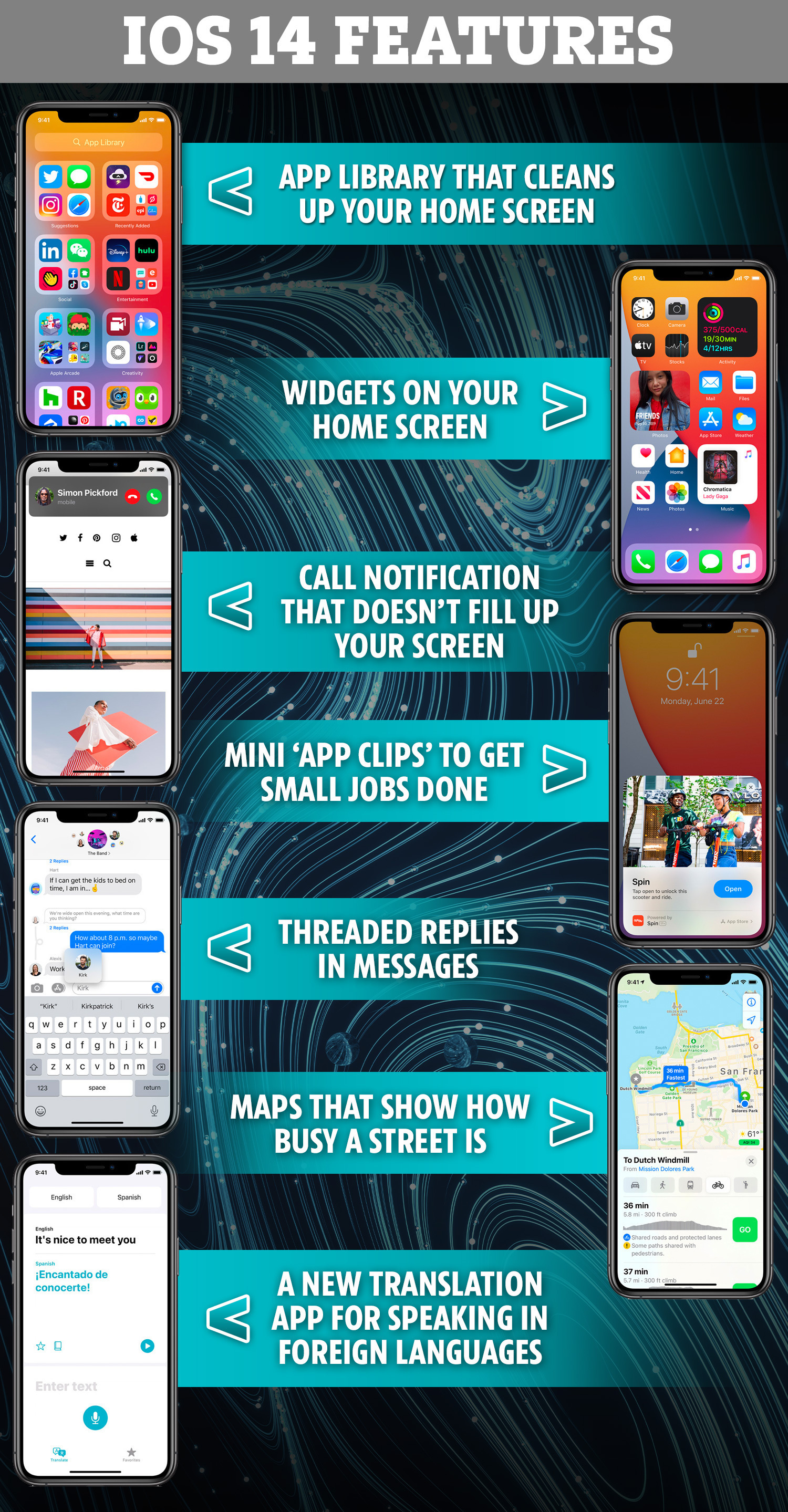 All of the new iPhones will come with iOS 14, the latest version of Apple’s mobile software.

These appear as big blocks on your home screen that show data from, say, your weather app, Apple News, Mail or a host of other apps.

The feature has been available to Android users for some time, and is a welcome addition to iOS.

Another major change is the new App Library, designed to clean up your home screen(s).

All of your apps are now organised automatically inside the App Library – If you’ve got loads of pages, you can tap your screen to hide some of them in the Library.

With iOS 14, you can also use virtual car keys that can be texted to pals, upgrade your Memoji with a face mask, and even speak in other languages through a live translation app.

Pre-orders for the iPhone 12 and iPhone 12 Pro open on October 16, while the two mobiles will go on general sale a week later, on October 23.

Pre-orders for the beefy 12 Pro Max and midget iPhone Mini will come a little later, launching on November 6.

In terms of colours, the iPhone 12 and Mini come in: Black, white, product red, green and blue.

All of the mobiles will be available at the company's brick and mortar stores on their respective release days.

All of the major mobile carriers in both the UK and US will be stocking the new handsets.

They include Vodafone, EE and Three in the UK, and Verizon, AT&T and T-Mobile in the US.

Why an October event? And what else was announced? 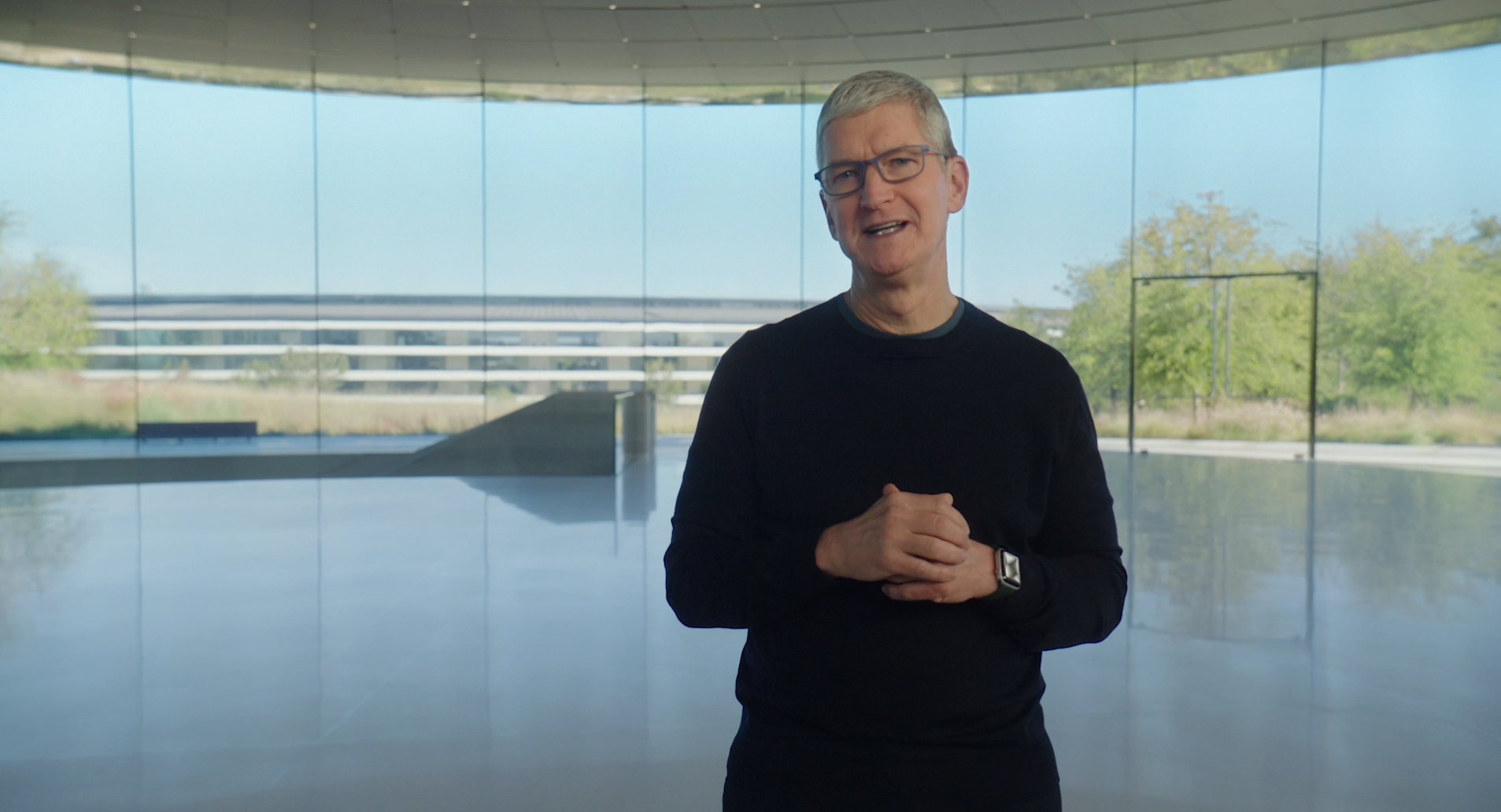 The company normally unveils new gadgets in front of a raucous crowd at Apple Park during its annual September event.

However, the coronavirus pandemic has forced event organisers to do things a little differently this year.

Apple exec Luca Maestri confirmed in July that, due to the outbreak, the new iPhones would be pushed back by "a few weeks".

That meant the company had to host a subdued September event without any iPhone news, with headline announcements including minor updates to the iPad and Apple Watch.

The big guns – a handful of new 5G iPhones – were pushed back to an October 13 showcase to line up with delayed production schedules. 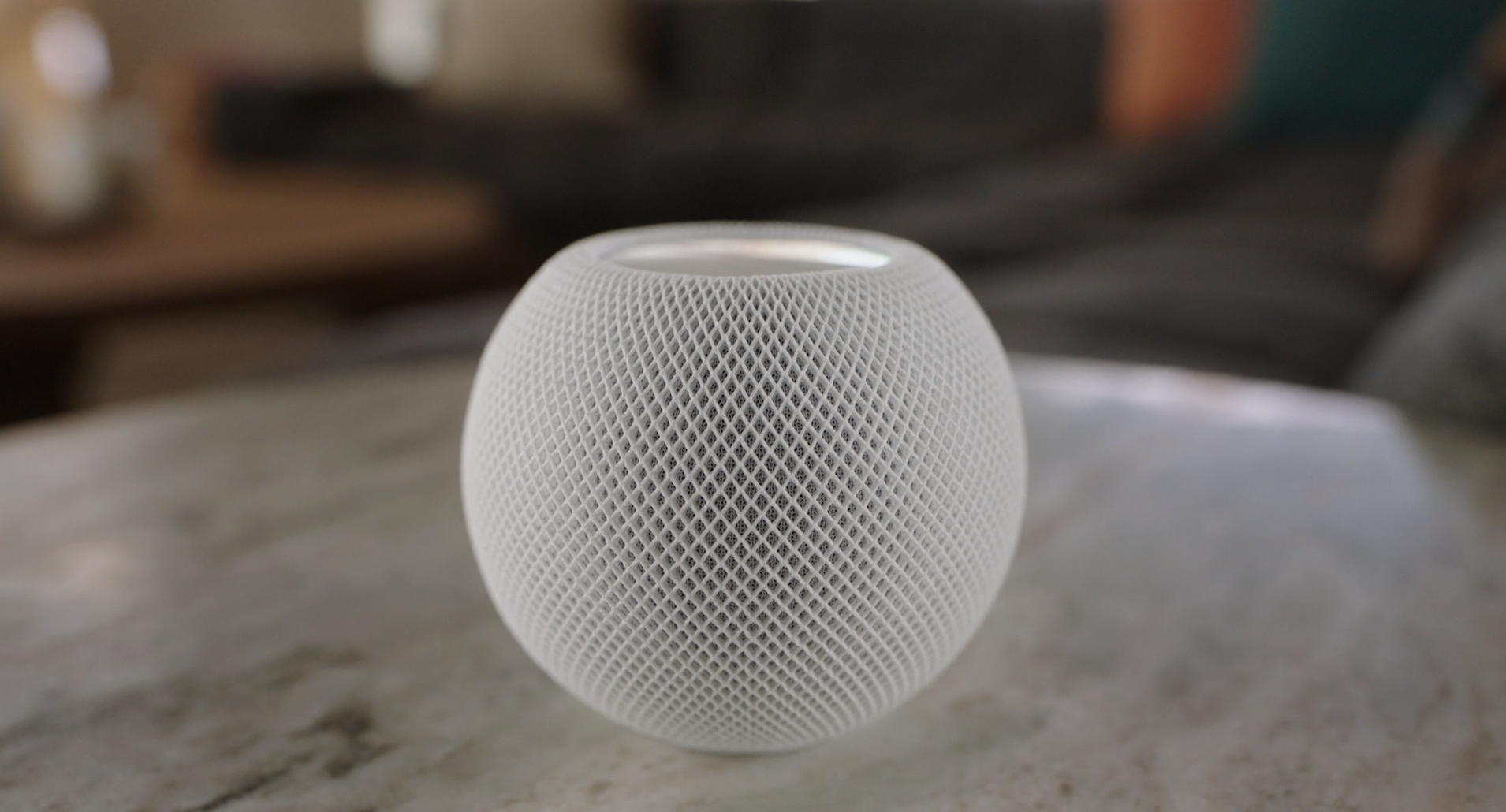 It's believed that Apple will release the base iPhone 12 and the Mini by the end of October, while the Pro and Pro Max models will ship in November.

A new "Intercom" feature lets you message everyone you live with through all of your HomePod speakers throughout the house, as well as the iPhones of the members of your home.

It'll be available for just $99 in the US from November 6.

In other news, Apple recently unveiled the latest version of the Apple Watch – its cheapest smartwatch in years.

There's a new iPhone homscreen in iOS 14, and fans are divided over it.

Find out about all the new iOS 14 features here.

What do you think of the new iPhones? Let us know in the comments!