A few days ago, President Biden said he doesn’t “want to wait another minute, let alone an hour” to act on gun control following two deadly mass shootings in the span of a week.

With a renewed sense of urgency, he called on the Senate to pass two recent House bills aimed at expanding background checks.

The last time a president signed major gun reform into law was over 25 years ago in 1994, and the most recent legislation isn’t likely to break that streak with a 60-vote filibuster and Republicans who find the bills overreaching.

Even moderates have expressed distaste for the twin House bills, though there is room for bipartisan overlap.

Sen. Joe Manchin, D-W.Va., has said he will not join his caucus in supporting the current bills.

Sen. Mitt Romney, R-Utah, decried that the nation had had “so many mass shootings,” but when asked what legislation could pass, he responded, “That’s a big topic.”

Sen. Pat Toomey, R-Pa., who has proposed his own gun control legislation in the past, told reporters Tuesday he doesn’t think the House has passed anything that can make it through the Senate. 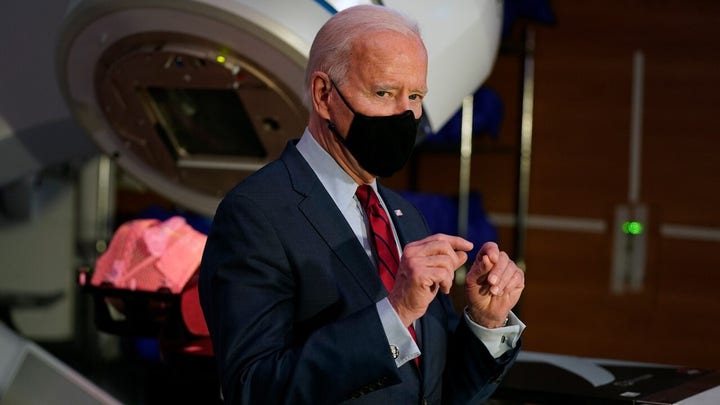 Still, some Republicans think there may be hope to come together on legislation. “Tightening the background check system is possible. The House bill is too broad and goes too far for the Senate,” said Sen. Rob Portman, R-Ohio. “But I think something is possible.”

“Thoughts and prayers alone are not enough. We need action,” Sen. Ted Cruz, R-Texas, said, echoing a line often used by Democrats after shooting tragedies. He called the House-passed bills “ridiculous theater” and said he and Sen. Chuck Grassley, R-Iowa, would reintroduce their own bill. They say their bill would target those trying to buy firearms who were banned from owning them by creating a federal task force to prosecute them. It would also allow for the hiring of more Alcohol, Firearms, Tobacco and Explosives (ATF) agents and implement other measures to strengthen existing gun laws. The bill received a majority vote when introduced in 2013 but did not meet the 60-vote filibuster threshold.

But Democrat Sen. Richard Blumenthal, D-Conn., accused Cruz of inserting “poison pills” into the bill, a term for intentionally controversial provisions that sink the bill. In this case, Blumenthal was referring to weak enforcement mechanisms.

Sen. Lindsey Graham, R-S.C., is in favor of a bipartisan bill originally introduced by Toomey and Sen. Chris Coons, D-Del.

“There’s something that we can do with Coons. Coons and Toomey have a bill that you have to notify local cops,” Graham told reporters at the Capitol Tuesday.

The NICS Denial Notification Act would require federal authorities to alert state law enforcement within 24 hours when someone attempts to use false information to buy a gun and fails a background check. Such crimes are rarely prosecuted by the federal government, according to a release on the bill.

Discussions could hinge on expanding background checks to include more gun sales. In 2013, Toomey and Manchin introduced a bipartisan bill that would expand federal background rules to unlicensed sellers, like gun shows and sellers on the internet.

That bill scored a majority in the Senate with 54 votes but did not break the filibuster.

“I want to find something that can pass,” Toomey said Tuesday, asked if he would reintroduce that bill. “That probably would require something that’s a little bit different. So, we’ll see if we can figure out how to thread that needle.”

One Democratic-backed bill would give authorities 10 business days instead of three to complete a background check before a gun sale. Under current law, gun sales can proceed if a background check takes longer than three days, what’s known as the “Charleston Loophole.” That bill passed 219-210, with only two Republicans supporting it.

Another mostly Democratic-backed bill, H.R. 8, would go beyond the previous Manchin-Toomey amendment to expand background check requirements to all private transfers, including guns bought over the internet, at gun shows or even transfers between family members, with certain exceptions for gifts. Eight Republicans joined Democrats in backing the bill.