Over the last 135 years, ExxonMobil has survived hostile governments, ill-fated investments and the catastrophic Exxon Valdez oil spill. Through it all, the oil company made bundles of money.

But suddenly Exxon is slipping badly, its long latent vulnerabilities exposed by the coronavirus pandemic and technological shifts that promise to transform the energy world because of growing concerns about climate change. 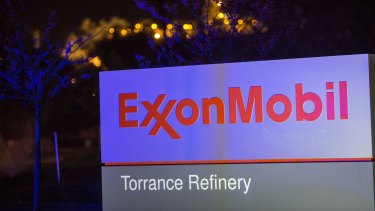 Exxon, like most American oil companies, has doubled down on its commitment to oil and gas and is making relatively small investments in technologies that could help slow down climate change.Credit:Bloomberg

The company, for decades one of the most profitable and valuable American businesses, lost $US2.4 billion ($3.2 billion) in the first nine months of the year, and its share price is down about 35 per cent this year. In August, Exxon was tossed out of the Dow Jones Industrial Average, replaced by Salesforce, a software company. The change symbolised the passing of the baton from Big Oil to an increasingly dominant technology industry.

"Is Exxon a survivor?" asked Jennifer Rowland, an energy analyst at Edward Jones. "Of course they are, with great global assets, great people, great technical know-how. But the question really is, can they thrive? There is a lot of scepticism about that right now."

Exxon is under growing pressure from investors. D.E. Shaw, a longtime shareholder that recently increased its stake in Exxon, is demanding that the company cut costs and improve its environmental record, according to a person briefed on the matter. Another activist investor, Engine No. 1, is pushing for similar changes in an effort backed by the California State Teachers Retirement System and the Church of England. And Wednesday, the New York state comptroller, Thomas P. DiNapoli, said the state's $US226 billion pension fund would sell shares in oil and gas companies that did not move fast enough to reduce emissions.

Of course, every oil company is struggling with the collapse in energy demand this year and as world leaders, including President-elect Joe Biden, pledge to address climate change. In addition, many utilities, automakers and other businesses have pledged to greatly reduce or eliminate the use of fossil fuels, the biggest source of greenhouse gas emissions, and have embraced wind and solar power and electric vehicles.

European companies like Royal Dutch Shell and BP have already begun to pivot away from fossil fuels. But Exxon, like most American oil companies, has doubled down on its commitment to oil and gas and is making relatively small investments in technologies that could help slow down climate change.

As recently as last month, Exxon reaffirmed it plans to increase fossil fuel production, though at a slower pace. The company is investing billions of dollars to produce oil and gas in the Permian Basin, which straddles Texas and New Mexico, and in offshore fields in Guyana, Brazil and Mozambique.

Exxon committed to its strategy even as it acknowledged that one of its previous big bets did not go well. Exxon said it would write down the value of its natural gas assets, most of which it bought around 2010, by up to $US20 billion. The company is also laying off about 14,000 workers, or 15 per cent of its total, over the next year or so as it seeks to cut costs and protect a dividend that it had increased every year for nearly four decades until this year.

But if this crisis is an existential threat, there has been no acknowledgment from Exxon's executive suite, still known in the company as the "God Pod." 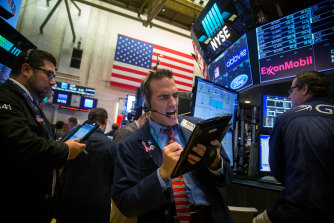 The company, for decades one of the most profitable and valuable American businesses, lost $US2.4 billion ($3.2 billion) in the first nine months of the year, and its share price is down about 35 per cent this year.Credit:Bloomberg

"Despite the current volatility and near-term uncertainty, the long-term fundamentals that drive our business remain strong and unchanged," Darren W. Woods, the company's chairman and chief executive since 2017, said at a recent shareholders meeting.

As a trained electrical engineer and 28-year company veteran, Woods speaks with the same cool self-assurance as his more famous predecessors. But he has kept a lower profile than Lee R. Raymond, who dismissed concerns about climate change in the 1990s and early 2000s, and Rex Tillerson, whose international wheeling and dealing between 2006 and 2016 helped him become President Donald Trump's first secretary of state.

While Raymond and Tillerson were dominant figures in the industry, they left Woods with many problems that were at least partly obscured by higher oil and gas prices.

Raymond's public scepticism of climate change damaged the company's reputation. Tillerson was slow to take advantage of shale drilling, which lifted the US oil industry. His foray into the former Soviet Union and Iraq proved to be expensive failures. When he bought XTO a decade ago for over $US30 billion to acquire fracking expertise and prized natural gas fields, gas prices were at their peak. As the commodity price declined in the years since, the company lost money and wrote off much of the investment last month.

Raymond declined to comment. Tillerson did not respond to a request for comment. Exxon responded to questions mainly by referring to previous public statements by Woods and the company.

Casey Norton, a company spokesman, said the acquisition of XTO had "brought people and technology in addition to potential resources" that helped the company be successful in shale fields in the Permian Basin.

In the first few years on the job, Woods followed the broad strategy set by Tillerson by borrowing and investing heavily to expand production. The pandemic forced Woods to change direction. The company now plans to spend one-third less on exploration and production through 2025 than it had originally planned.

Yet the changes Exxon is making, while big in absolute terms, seem like tinkering compared with what European oil companies are doing. BP has announced that it will increase investments in low-emission businesses tenfold over the next decade, to $US5 billion a year, while shrinking oil and gas production by 40 per cent. Royal Dutch Shell, Total of France and other European companies are making similar moves at varying speeds. 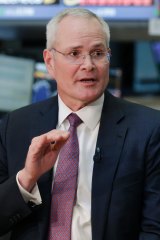 Exxon chief Darren Woods inherited a lot of problems when he took on the job in 2017.Credit:AP

Exxon executives have said they recognise an energy transition is underway and necessary. But they have also asserted that it wouldn't make sense for the company to get into the solar or wind energy business. Instead, the company is investing in breakthrough technologies. One such project involves using algae to produce fuel for trucks and airplanes. Exxon has been talking about that project for years but has yet to begin commercial production.

Exxon refineries might also someday become major producers of hydrogen, which many experts believe could play an important role in reducing emissions. The company is betting on carbon capture and sequestration. One project involves directing carbon emitted from industrial operations into a fuel cell that can generate power, reducing emissions while producing more power.

"Breakthroughs in these areas are critical to reducing emissions and would make a meaningful contribution to achieving the goals of the Paris agreement, which we support," Woods said in a message to employees in October, referring to the 2016 global climate accord.

Energy experts said it was possible that Exxon could come up with new uses for carbon dioxide like strengthening concrete or making carbon fibre, which could replace steel and other materials.

"If Exxon and other major oil industry players crack those nuts, the entire discussion about hydrocarbons changes," said Kenneth B. Medlock III, a senior director at the Centre for Energy Studies at Rice University. "That kind of change is slow until it's not. Think about wind and solar, which were slow until they weren't."

A big increase in oil and gas prices could also allay some of the concerns about the company, at least temporarily. In recent weeks, as oil prices have climbed on optimism about a coronavirus vaccine, so has Exxon's stock.

But John Browne, a former BP chief executive, said it was not clear that Exxon and the other big American companies would transform their businesses adequately for a low-carbon future.

"They may decide just to carry on and harvest and say, 'Let's see what happens in the long run,'" he said. "That's quite a risky strategy nowadays."