Australia’s largest consumer electronics and whitegoods retailer JB Hi-Fi has delivered a double-digit jump in half-year profits thanks to strong demand during the Black Friday and Boxing Day promotions, which more than made up for a fall in online sales.

In an announcement to the ASX on Tuesday morning, the company said its sales rose 8.6 per cent to a record $5.3 billion in the December half, while net profit increased 14.6 per cent to $329.9 million.

JB Hi-Fi’s shares jumped 3 per cent to $48.53 after the result, leading gains on the local bourse as the S&P/ASX200 benchmark declined 0.2 per cent. 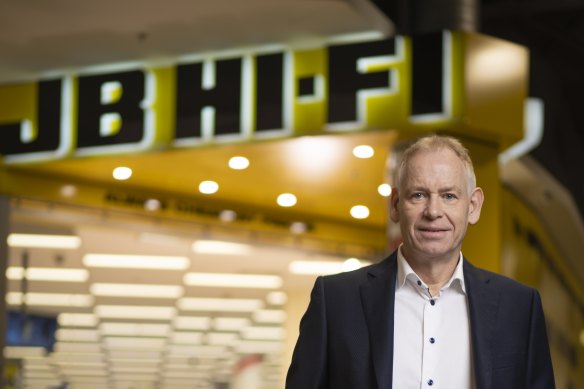 The group’s Australian operations grew 9.1 per cent to $3.6 billion, accounting for 68 per cent of sales, while its New Zealand sales increased 16.1 per cent to $161 million. Subsidiary The Good Guys booked 7.3 per cent growth in sales to $1.5 million.

It comes after the retailer reported 9.4 per cent profit decline in the previous December half, which included disruptions to operations as a result of COVID-19.

“We are pleased to report record sales and earnings for [the half year] as trading conditions started to normalise following two years of COVID related disruptions,” he said in a statement.

JB Hi-Fi was a major beneficiary of the work-from-home trend during COVID-19, with online purchases soaring 63 per cent to $1.1 billion – or 22.7 per cent of the company’s total sales – in the six months to December 2021. That fell to $752.1 million, or 14.2 per cent of total sales, in the latest half, despite data from the ABS showing total online sales across the nation’s retailers more broadly grew 26 per cent in November, driven by the increasing popularity of the Black Friday promotions.

The group will release its half-year audited statutory results on February 13.