Joe Biden promised in his first speech as president to “repair our alliances and engage with the world once again” ― a clean break from a predecessor who berated America’s traditional diplomacy and historic friends abroad while courting longtime rivals like Russia.

“We salute the firm interest on the part of the new administration in the trans-Atlantic alliance. This is not just lip service; this is not simply a statement,” Armando Varricchio, Italy’s outgoing ambassador to the U.S., told HuffPost in an interview last week.

To Varricchio ― who entered the job under President Barack Obama and stayed in it throughout Donald Trump’s presidency ― the clearest sign of Biden’s seriousness about American alliances is the way he handled his biggest foreign policy move to date: establishing a Sept. 11 deadline for U.S. troops to leave Afghanistan and end America’s longest foreign military intervention.

“The administration since the beginning made it clear that it was important to consult and … the president reaffirmed this in his own remarks” on Afghanistan last Wednesday, Varricchio said. “This is something that shows that the more that we work together, the more effective our collective response is to what we perceive as common threats and challenges. So it is not just a matter of principle ― this has an immediate effect in tightening our relations.”

Biden administration officials have extensively described their thinking to close partners in settings like a recent trip by Secretary of State Antony Blinken and Defense Secretary Lloyd Austin to Brussels and meetings with Italian foreign minister Luigi Di Maio in Washington last week, the ambassador added.

The Trump administration repeatedly stumbled in explaining its Afghanistan policy ― notably last year, when the then-president tweeted that he would pull out all U.S. troops by Christmas without informing Pentagon officials or allies in advance.

Italy is one of the biggest contributors to the international coalition of forces currently stationed in Afghanistan to support the U.S.-backed Afghan government, with 895 Italian troops deployed.

After Washington decided to invade Afghanistan over its former government’s role in the Sept. 11, 2001, terror attacks, the NATO alliance invoked its mutual defense principle for the first time in its history ― and troops from Italy and other NATO member countries joined the American-led mission against al Qaeda’s partners in the country.

Those forces will return home in the coming months under Biden’s plan. Describing the strategy, the president said American partner nations now have more troops in Afghanistan than the U.S. does. While the militants whom the U.S.-led coalition initially targeted, the Taliban, remain powerful, “we cannot continue the cycle of extending or expanding our military presence in Afghanistan, hoping to create ideal conditions for the withdrawal, and expecting a different result,” Biden said. 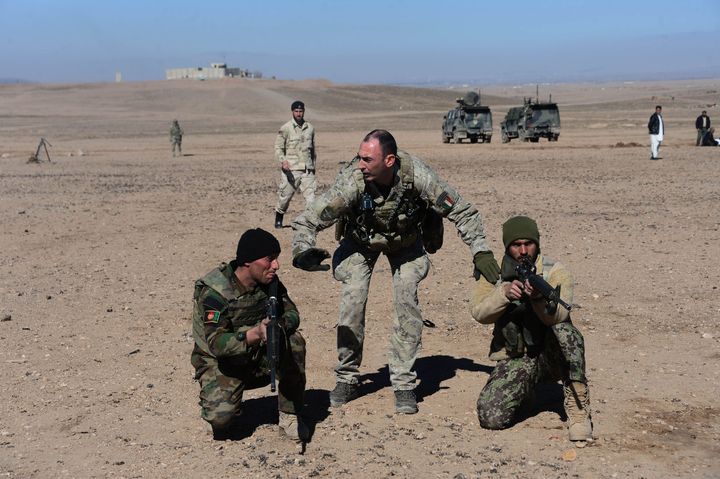 Critics of the president’s approach say it could let the Taliban restore the repressive regime it maintained before the 2001 invasion and help terror groups strengthen and attack the U.S.

Supporters of the withdrawal note that the U.S. and its allies can still pressure the Taliban and other Afghan factions to negotiate over the country’s future and preserve progress on issues like women’s rights ― and that the foreign military deployment has not prevented organizations like the Islamic State from gaining ground in Afghanistan.

American partners are ready to continue investing in the country, according to the ambassador.

“It is important to continue our activity when it comes to promoting human rights, strengthening the social fabric of the country … Italy will stay in Afghanistan in a different way,” Varricchio said, adding that Rome will help monitor the expected power struggle within the country “to ensure that Afghanistan does not pose an immediate threat to our own nations.”

He called the drawdown “emotional,” noting that Italy leads one of the coalition’s four regional commands in Afghanistan, in Herat province.

The ambassador cited the cooperation in Afghanistan as evidence for why Americans should value international relationships like the one between the U.S. and Italy ― a partnership that turned 160 this year and that he called “a blessing” for the two countries.

“There is no better investment to protect your own nation, to make sure that your nation thrives, than to invest in alliances,” Varricchio said. “And this is the unique feature of our times: America’s enemies don’t have allies, only America has such a wide network of allies, and this is even more important than having a strong military structure.”