President Joe Biden hosted his first meeting with Republican and Democratic leadership from the House and Senate since taking office on Wednesday, ahead of a critical period in Congress for his agenda on issues like infrastructure, gun control and police reform.

The trip to the Oval Office for McCarthy and McConnell is the first since the president was inaugurated in January. House Speaker Nancy Pelosi (D-Calif.) and Senate Majority Leader Chuck Schumer (D-N.Y.), who also attended, have previously met with Biden at the White House.

Biden has said he would like to work with both parties to fix the many issues facing the country, such as crumbling roads, bridges and waterways. But his plans to overhaul the nation’s infrastructure and create jobs ― totaling over $4 trillion ― face fierce GOP opposition in Congress. Top Republican lawmakers reiterated this week that there are certain things they won’t accept in any bipartisan deal: a tax increase on corporations and wealthy Americans.

“We are not interested in reopening the 2017 tax bill. That’s a red line,” McConnell said Wednesday following the meeting with Biden. 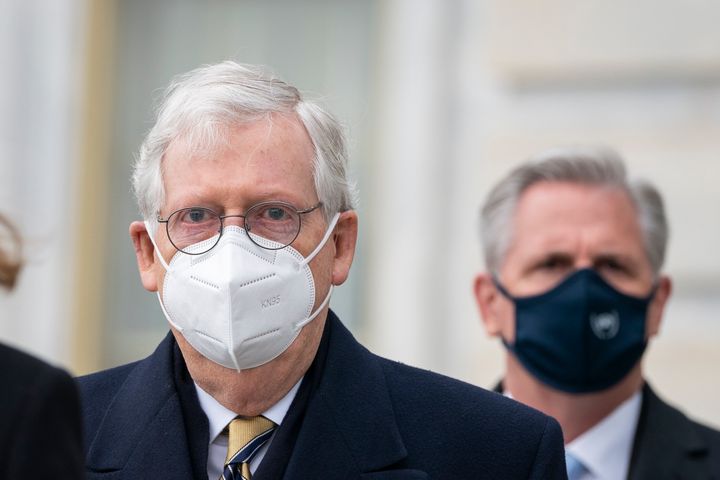 For Democrats, who control both legislative chambers, reaching a bipartisan agreement is preferred, but not necessarily required. The party can muscle through an infrastructure bill on a party-line vote with a simple majority in the Senate. But going alone has its risks, including getting every Democrat to agree what the bill should include and how to pay for it. Democrats in the House and Senate are already jockeying over tax increases in the package.

“We said that we would explore the places where we could agree on and come to bipartisan agreement,” Schumer said after Wednesday’s meeting. “We’re going to try hard to get one.”

The meeting with top Republicans will test Biden’s reputation as a deal-maker ― as well as his campaign-trail optimism about the Republican Party turning a page post-Trump. Two years ago this week, for example, Biden predicted the GOP would have an “epiphany” and start working with Democrats once Trump was out of office.

“The thing that will fundamentally change things is with Donald Trump out of the White House. Not a joke,” Biden said in 2019 at a campaign stop in New Hampshire. “You will see an epiphany occur among many of my Republican friends.”

There’s been little evidence of an epiphany so far, however. Although there have been fresh negotiations in Congress over police reform and gun safety, a deal on either deeply contentious issue has proved elusive.

The GOP is actually embracing the very kind of denialism and falsehoods that led to the insurrection at the U.S. Capitol on Jan. 6. On Wednesday, House Republicans voted to oust Rep. Liz Cheney (R-Wyo.) — a staunch conservative who refused to embrace Trump’s lies about the 2020 election — from their leadership. Just this past week, the former president again called the election “rigged” and “stolen.”

Despite the clear evidence otherwise, McCarthy, who backed Cheney’s ouster, insisted that was all in the rearview mirror.

“I don’t think anybody is questioning the legitimacy of the presidential election,” McCarthy said at the White House. “I think that is all over with. We’re sitting here with the president today.”