The attack is the latest sign that Trump may be losing his way in his battle against kneeling.

Last week his press secretary, Kayleigh McEnany, declared that Trump was “very much against kneeling in general.” She likely intended to say that he’s opposed in general to taking a knee to protest racism and police brutality during the national anthem at sports events. But the blanket condemnation of kneeling triggered a wave of criticism from those who kneel during religious services, at memorials or to pray at gravesites.

The Trump campaign ad released Wednesday includes an image of Biden as he kneels, superimposed over violent protest scenes.

The Biden video was carved out of his appearance last week at the Bethel African Methodist Episcopal Church in Wilmington, Delaware, where he met with Black leaders after George Floyd, a Black man, died last month while a white police officer in Minneapolis knelt on his neck for nearly nine minutes. There is no context provided in the Trump ad nor a hint that Biden was at church when he knelt.

A narrator intones in the ad: “Antifa destroys our communities. Rioting. Looting. Yet Joe Biden kneels down.” 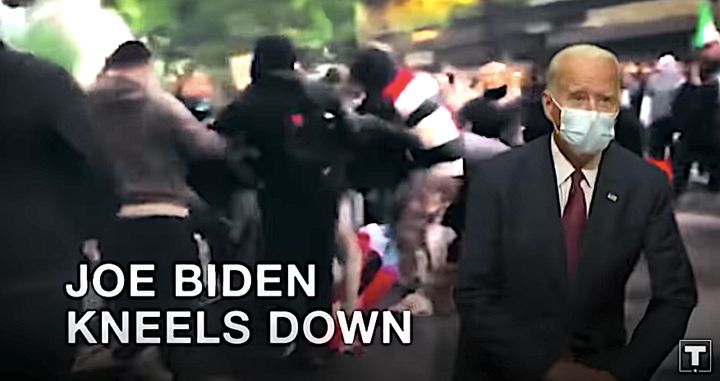 Trump campaign manager Brad Parscale said in a tweet accompanying the ad that Biden is “KNEELING to leftists” as Trump “stands for law & order.” (The ad claims Biden wants police forces defunded. In fact, Biden is opposed to defunding police forces.) Trump posted the ad to YouTube — and retweeted a message from a supporter saying that “cowards kneel.”

Bethel AME hailed Biden’s visit and slammed Trump for using a church as a “prop or photo-op.” It juxtaposes photos of both men, insisting that only one image “shows REAL faith.”

Rep. Lisa Blunt Rochester (D-Del.), who was among those who met with Biden, told The Washington Post that she appreciated Biden “showing up.” We’ve “got a president that ain’t even showing up, who doesn’t even care,” she said. “Come on.”

Critics slammed the campaign ad on Twitter — just as they did McEnany’s comment against “kneeling in general,” calling it insensitive to religion.

This is the message Trump retweeted earlier this week about cowardly kneelers, with responses: