Another round of stimulus checks is on the way.

President Joe Biden signed a COVID-19 relief package worth nearly $1.9 trillion into law on Thursday. The legislation includes $1,400 direct payments, a $300 weekly federal unemployment benefit until September, additional money for parents, funding for a national vaccination program, and billions of dollars for state and local governments and reopening schools.

“This historic legislation is about rebuilding the backbone of this country and giving people in this nation — working people, middle class folks, the people who build the country — a fighting chance,” Biden said before signing the bill.

This week marks the first anniversary of the World Health Organization declaring the coronavirus a global pandemic. Since then, the United States has lost nearly 530,000 lives to COVID-19. Tens of millions of Americans lost their jobs as businesses shuttered, schools closed their doors, and Americans were told to stay home.

This round of coronavirus relief is not only one of the most progressive packages ever written into law, it is also the biggest increase in federal assistance for working families in generations.

It is a major legislative achievement for Biden, who promised voters a historic recovery bill, including another round of stimulus checks, within his first months in office. The final package includes nearly all of the policies Biden proposed in January before he was even inaugurated. Democrats, despite holding razor-thin majorities in both houses of Congress, stood in line behind the president’s proposal.

The Senate passed the bill over the weekend, and the House passed the bill on Wednesday. Not a single Republican vote for the final package. Only one Democrat, Rep. Jared Golden (Maine), voted against the bill. 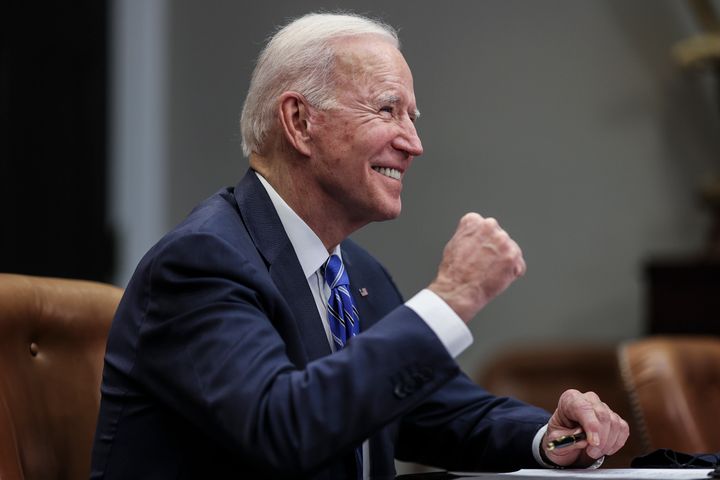 Congressional Democrats did have to make some changes to accommodate the more centrist lawmakers in their caucus, who had concerns that Biden’s proposal was too beneficial for middle and high earners.

Democrats also kept federal unemployment insurance aid at its current $300 per week level, instead of expanding it to a $400 weekly benefit as Biden had initially called for. That change came after moderate Sen. Joe Manchin (D-W.Va.) threatened last week to side with Republicans, stripping out Democrats’ proposal and significantly shrinking the benefits.

In that same provision, however, Senate Democrats also decided to forgive taxes on the first $10,200 in unemployment income for Americans with household incomes of less than $150,000 — a major relief for jobless Americans who were stuck with a surprisingly large tax bill even after living off state and federal benefits for the last year.

Among the most progressive policies in the bill is a form of a child allowance. Democrats expanded the child tax credit for low and middle income Americans and also directed the Internal Revenue Service to pay out the benefit in advance in “periodic payments,” instead of an end-of-year tax refund.

That means that many American families will be receiving regular payments throughout the year, up to $3,600 per child under the age of 6, and up to $3,000 per child between 6 and 17 years of age. Parents making no income will also benefit. A smaller benefit ― $2,000 per child per year ― is still available for families making up to $400,000 a year.

This child benefit is only through 2021, but Democrats want to make it permanent. Some estimates say the child tax credits could cut child poverty in the United States by 40%, lifting millions of children above the poverty line.

Democrats did adopt some Republican amendments, including a bipartisan proposal from Sen. Lisa Murkowski (R-Alaska) and Manchin to direct $800 million toward alleviating youth homelessness, and another from Sen. Jerry Moran (R-Kan.) on education for veterans.

But in the end, Republicans stood in lock step in opposing the final bill, calling it a laundry list of liberal ideals and condemning it as billions of dollars in unnecessary spending.

That didn’t stop some of them from taking credit for the final package’s provisions. On Wednesday, Sen. Roger Wicker (R-Kan.), who voted against the final bill, applauded the money going toward restaurants and small businesses.

“Independent restaurant operators have won $28.6 billion worth of targeted relief,” Wicker tweeted. “This funding will ensure small businesses can survive the pandemic by helping to adapt their operations and keep their employees on the payroll.”

Biden’s team argues that the bill is still a bipartisan feat, because the American public is strongly in favor of the relief package, which has polled very well, even among Republicans.

“An overwhelming percentage of the American people — Democrats, Independents, our Republican friends — have made it clear … they strongly support the American Rescue Plan,” Biden said Thursday.

Senate Democrats passed the bill through a legislative maneuver called budget reconciliation which allowed the final proposal to go through with only a simple majority. However, that process did force the caucus to eliminate some provisions, like increasing the minimum wage, which was deemed out of step with Senate rules.

That fight isn’t over, Democratic leaders have said. With this major emergency relief package out the door, Biden and congressional Democrats will try to get more of their major policy ideas — from a multi-trillion dollar infrastructure deal, to a national paid leave program, to universal pre-k — through Congress.