President Joe Biden has conceded to Republicans in the political battle over unemployment insurance.

Biden said last month that the extra $300 the federal government is temporarily adding to unemployment benefits has no “measurable” impact on hiring. The president changed his tune on Friday, however, saying the extra money has been helpful but that it “makes sense it expires in 90 days.”

Millions of workers will actually receive their final federal benefits this month, as Republican governors in 25 states — who claim the money has caused a “worker shortage” — pull the plug on the extra $300, as well as separate programs for gig workers and the long-term unemployed.

White House press secretary Jen Psaki said Friday afternoon that governors “have every right” to “not accept” the extra benefits. It’s the first time the White House has weighed in on the biggest controversy over the red state cutoffs, which congressional Democrats did not anticipate when they extended the temporary benefits earlier this year.

Labor law experts and Sen. Bernie Sanders (I-Vt.) have argued federal law actually requires the Labor Department to make sure some of the benefits get paid until their scheduled expiration in September. Labor Secretary Marty Walsh told HuffPost on Thursday that his department was “looking into it,” but Psaki’s statement indicates the White House thinks Sanders is wrong.

The president’s comments about ending the extra $300 “are hugely disappointing and will do nothing to help the millions of workers still in crises,” the National Employment Law Project’s Nicole Marquez said in a statement. The worker advocacy group has argued the law requires the administration to keep paying gig worker benefits.

Psaki wouldn’t say whether the administration believes the boosted federal unemployment insurance is hurting employment levels, saying it’s “a really difficult thing to analyze.” She said the coronavirus remains the biggest impediment to the economic recovery.

Economic and unemployment experts said the benefits had minimal impact on employment levels in the May jobs report, which came in slightly below expectations but nevertheless showed bigger monthly gains in the job market than in decades before the pandemic. 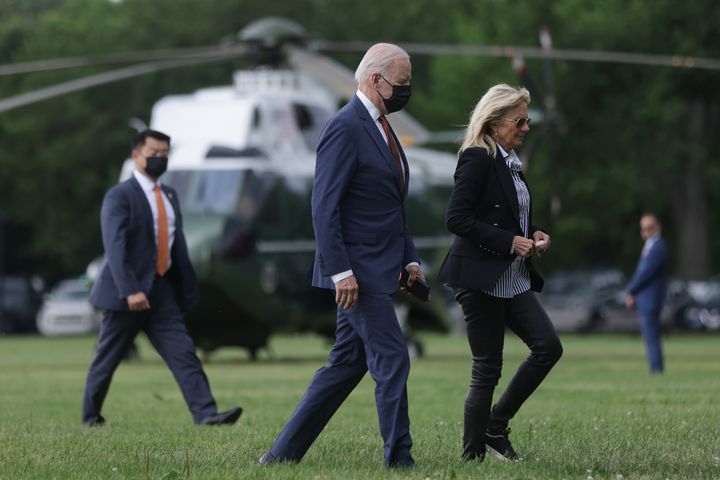 Biden’s decision not to fight Republican governors over unemployment benefits likely aligns with public opinion. Fifty-four percent of voters, including 54% of independent voters, said the governors cutting benefits were doing the right thing, according to a May Quinnipiac poll﻿.

The administration has been increasingly vulnerable to GOP attacks on the extended federal unemployment benefits included in the American Rescue Plan. For months, Republicans have chastised Democrats for paying Americans to stay home, and have claimed the aid is stalling economic recovery. (Republicans said the same thing last year when Congress added twice as much to weekly benefits, but have redoubled their rhetoric now that a Democrat is president.)

Biden gave into the attacks a little bit last month, delivering a speech that defended the unemployment benefits but also mostly urged Americans to go back to work. In that speech, Biden emphasized that workers can’t “game the system” to stay out of work. And the Labor Department said it would “clarify” existing written guidance that “workers may not turn down a job due to a general, non-specific concern about COVID-19 and continue to receive benefits.”

Many Democratic lawmakers have been hoping Congress would include a permanent overhaul of the unemployment insurance system in one of the major domestic policy bills Biden has outlined. Sen. Ron Wyden (D-Ore.), the top proponent of reforming the state-federal unemployment system, envisions a policy that automatically adds or subtracts benefits based on the unemployment rate, making the benefits less susceptible to political whims.

The White House has expressed support for such a change, but the policy has not been prioritized in any of its legislative pushes.

“I’ve long said pandemic unemployment programs should be tied to economic conditions on the ground,” Wyden said in a statement to HuffPost. “If that had been done in the rescue plan, there wouldn’t be these concerns about the arbitrary September cutoff.”