Qantas boss Alan Joyce doesn’t bluff nor does he bring a knife to a gunfight. So make no mistake, when Joyce announces he wants to review the airline’s property leases what he is really attempting to do is generate an auction between the states for who gets to house Qantas’s head office.

The winner will be the state that offers Qantas the largest incentive to relocate (or in the case of NSW to retain) the head office.

And it’s not just about the head office. There are myriad Qantas facilities up for grabs, such as training and maintenance facilities as well as the Jetstar headquarters. 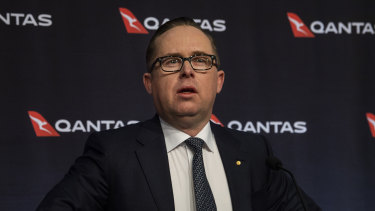 Qantas boss Alan Joyce will relocate the head office to the state with the highest bid.Credit:Louise Kennerley

Equally, the $40 million cost-saving that Qantas says it is looking to find has little bearing on its property strategy. The airline has earmarked several billion dollars of cost savings over the next couple of years so $40 million won’t move the dial.

This strategy is more about making money than it is about saving money.

Joyce is looking to hollow every log as Qantas moves into the eighth-month of COVID-19. He has already stood down the majority of his staff and is looking to renegotiate lots of supply deals and more importantly enterprise bargaining agreements.

Once Qantas is eventually up and running again Joyce won’t have missed any opportunities to overhaul the airline’s cost base.

Joyce watched Virgin before and during its recent administration get a financial assistance auction going between the state governments. Queensland ultimately won this battle but it came with a $200 million price tag.

Emboldened by Virgin’s success at pitting state governments against each other, Qantas dipped its toe in the pond a few months ago and approached the NSW government for some assistance/incentive to help pay for a new flight training simulator in Mascot – the plans for which had already been drawn up and approved (the hole had been dug and the concrete slab had been poured).

NSW declined the offer and Qantas stopped the project immediately.

This time around Joyce brought a much bigger weapon – its head office.

Already the Premiers of Victoria and Queensland, who were quizzed about the possibility during Tuesday’s COVID-19 press briefings, appear keen to have a horse in the race. Joyce is understood to have already spoken to the eastern state Premiers in recent weeks about its real estate plans.

Given Qantas is about three times the size of Virgin, having the flying kangaroo’s head office is a juicy prize and one that is arguably worth much more than the $200 million Virgin is scheduled to pocket.

Around 500 people are employed at Qantas’ head office in Mascot and another 1000 at Jetstar’s base in Melbourne’s Collingwood.

Qantas will also consider consolidating some facilities and "right-sizing" (shrinking) others.

But even with the government incentives, Joyce needs to find other creative ways to lower Qantas’ cost base. Virgin did this while under administration. It negotiated aircraft leases, property rental, shed staff permanently and of much more significance, it recast its enterprise bargaining agreements.

Virgin now boasts a cost base more aligned with that of Jetstar.

Joyce will undoubtedly consider that now is the perfect time to deal with international pilots. In the first instance he would understand that while the international division is in hibernation, the pilots are in a weakened negotiating position. And when international flying resumes around the world there will be plenty of spare pilots looking for work.

There is also a good chance that several of the aircraft type, such as the A380s won’t have much (if any) place in the post-COVID Qantas line up. It would be unsurprising to see a larger number of international pilots made redundant before the airline resumes normal services.

And Joyce is no stranger to playing industrial relations hardball. He did so in order to get a 30 per cent productivity lift when introducing direct flights from Perth to London and again on the Sunrise project to fly direct from Sydney and Melbourne to London, Paris and New York.

"There will be some reinvention required to succeed in a different (post pandemic) world," Joyce said in August while reporting an underlying loss of $2.7 billion for the full year to June 30, 2020.

He noted that achieving a $15 billion cost slashing target over three years would involve "hard decisions".