Kamala Harris’s first official speech as the Vice President of the United States was a moment to remember.

The newly-inaugurated VP made an appearance during the inaugural celebration concert, following standout performances from music industry veterans, Broadway performers, and celebrity speakers. During her address, Harris discussed what today’s inauguration means and represents for the United States, especially amid a tumultuous start of the new year.

“It is my honor to be a here—to stand on the shoulders of those who came before to speak tonight as your Vice President,” she said. “In many ways, this moment embodies our character as a nation. It demonstrates who we are, even in dark times. We not only dream—we do. We not only see what has been. We see what can be. We shoot for the moon. And then we plant our flag on it. We are bold, fearless, and ambitious. We are undaunted in our belief that we shall overcome that we will rise up.” 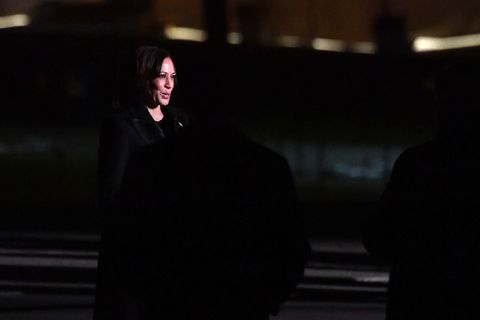 The vice president continued, assuring the American public that she has faith that the country will make it through the multiple challenges it’s currently facing, including the COVID-19 pandemic, a racial reckoning, and the ongoing fight for equality and justice for all.

“We are undaunted in our belief that we shall overcome—that we will rise up. This is American aspiration,” she added, evoking inspiring leaders throughout American history. “In the middle of the Civil War, Abraham Lincoln saw a better future and built it with land grant colleges and the transcontinental railroad. In the middle of the civil rights movement, Dr. King fought for racial justice and economic justice American aspiration is what drove the women of this nation throughout history to demand equal rights and the authors of the Bill of Rights to claim freedoms that had rarely been written down before. A great experiment takes great determination, the will to do the work, and then the wisdom to keep refining, keep tinkering, keep perfecting. The same determination is being realized in America today.”

Harris concluded her message by honoring the Americans she’s witnessed portray those same honorable values, especially amid these troubling times. She credited this American spirit as being the guiding influence as the nation heads into, hopefully, a new and brighter future.

“I see it in the scientists who are transforming the future. I see it in the parents who are nurturing generations to come in the innovators and the educators and everyone everywhere who is building a better life for themselves, their families and their communities. This too is American aspiration,” said Harris. “This is what President Joe Biden has called upon us to summon now. The courage to see beyond crisis, to do what is hard, to do what is good, to unite to believe in ourselves, believe in our country, believe in what we can do together. Thank you. And may God bless America.”