The acquisition of surf retailer Rip Curl has emerged as a bright spot for outdoors retail group Kathmandu, which has continued to be battered by COVID-induced store closures and weaker consumer spending.

In a trading update ahead of its annual general meeting on Wednesday, the company revealed that total sales across its Kathmandu, Rip Curl and Oboz brands had surged 72 per cent in the first quarter of the new financial year.

However, this was primarily driven by wholesale sales at Rip Curl, which distributes its products across thousands of stores in North America and Europe. Comparable direct-to-consumer sales for the 16 weeks up to November 15 fell 21.4 per cent, led by a 37.7 per cent plunge in trade at Kathmandu's namesake brand.

Shares in the retailer slumped 4.6 per cent to $1.26 after the trading update as the wider sharemarket climbed 0.6 per cent thanks to gains from banks, miners, and energy stocks. 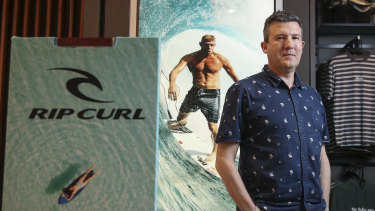 Adjusted for the closure of 60 locked-down stores in Melbourne and 14 in Auckland over the period, direct sales dropped 7.6 per cent across the group, but trade was still led by Rip Curl, which saw adjusted sales jump by 26.8 per cent.

Kathmandu paid $350 million for Rip Curl in October last year, touting the acquisition as an opportunity for the traditionally winter-focused retailer to reduce its seasonality by tapping into the summer surfing crowd.

Chief executive Xavier Simonet said the company had been "very pleased" with the strength of Rip Curl since its purchase and the trading update vindicated the decision to diversify the group.

"We are realising the benefit of a diversified group, with strong performance in summer weighted product categories for Rip Curl in all key geographies, following successful winter trading for Kathmandu," he said.

Earnings across the company have stayed in line with last year, helped by government subsidies. Online sales have outperformed, growing 37 per cent in the quarter

However, the CEO floated concerns for the Christmas period. "The group’s half-year result will be dependent on the key Christmas trading period. The impact of COVID-19 on consumer sentiment remains a risk," he warned.

At Kathmandu's full-year results in September, the company estimated COVID-related closures and locked-down customers spending less on outdoor gear had cost the business $125 million. Its underlying full-year profit fell 44.5 per cent to $31.5 million.

Mr Simonet said the company still had a strong balance sheet following its $200 million capital raising earlier this year and would return to paying dividends when conditions were right.