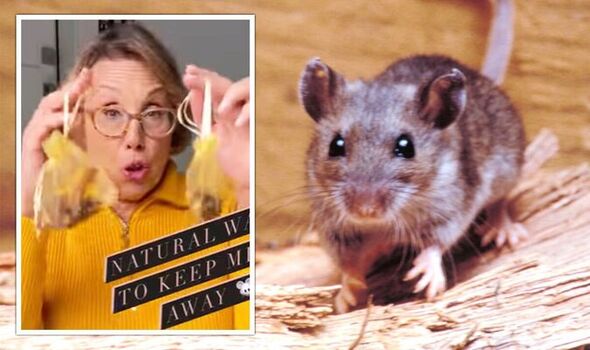 A US grandma has amassed a huge following thanks to her clever household tips. Babs, who refers to herself as “everyone’s grandmother”, has eight of her own grandchildren. She has amassed a whopping 2.7M followers on her TikTok account @brunchwithbabs and 1.7M on her Instagram, @brunchwithbabs. Babs recently demonstrated her clever and natural tip to keep mice away.

As the weather gets colder in the winter mice, understandably, want to come inside where it’s warmer. Sadly for them, most aren’t keen to share their living quarters with these furry pests. Thankfully Babs has a tip on hand which means Britons won’t have to resort to violent traps to deter mice.

Babs said: “Did your mum ever tell you that there’s a natural way to keep mice out of your home and out of your hair?”

She advised using the natural remedy to keep mice away due to the smell. It may be more effective than attempting to block up the numerous entry spots mice use for properties.

Babs added: “Don’t forget mice can get through the tiniest of holes.”

So, how do you do it? Babs explained: “Just grab some favour bags.”

She demonstrated the mesh bags with ribbon ties, which are often used to give out little gives. She went on: “Then, in your favour bag, put one tablespoon of red pepper flakes, one tablespoon of whole cloves, and a cinnamon stick.”

So why does this work so well? Babs explained: “Mice have a very intense sense of smell, and strong smells like this keep them away.

“The best part? It’s all-natural. You could put these anywhere, like all around your house because an ounce of prevention is worth a pound of cure.”

Bab’s fans weighed in with some of their own methods to deter mice. One suggested another smell trick.

DON’T MISS
Get rid of fruit flies with strawberries – clever hack [HOW TO]
‘Prepare for an invasion of ultra-rats!’ Steps to protect your garden [EXPERT]
3 simple tricks to get rid of flies including bicarb of soda [PROPERTY]

They wrote: “Peppermint oil on a cotton ball placed in the back corner of cabinets has worked for us. (Keep away from pets).”

Another said: “I sprinkle mini chocolate chips around my decks, trash area, and garage. They love chocolate but it’s deadly for them.”

Another suggested a more unusual tip, and wrote: “My mum used to leave a bottle cap of vodka for them, hours later they try to outrun us.”

A number suggested adding a new member to your family to deter mice. One said: “You should try a cat, I’ve got one and my house is mouse free.”

“Natural tip: adopt a cat,” another wrote, “saves a cat’s life and keeps mice out.

“Have a beautiful cat. That’s my natural way to keep mice away, and I get to snuggle the cat,” another said. One remarked: “I married my pest control man. Problem solved.”

Pimlico: Mice seen within flat of a single mother of two children

Exterminators say that certain smells can keep mice out of your home. These smells include:

If you are still struggling with mice, blocking their entry points is advised. An exterminator shared 11 ‘main entry points’ to block to get rid of mice.