House GOP Leader Kevin McCarthy brought in a record-breaking fundraising windfall in the lead-up to the November election as Republicans try to take back control of the House from Speaker Nancy Pelosi and Democrats.

McCarthy raised more than $16 million in the third quarter across all seven of his fundraising accounts. That puts his total for the 2020 election at $103 million — the most ever for a House Republican in any election cycle, a McCarthy campaign aide told Fox News.

The fundraising haul has allowed McCarthy to pump funds into individual House races where Republicans are trying to defeat sitting Democratic incumbents. Since 2019, he's put $49 million into campaign accounts of Republicans and the National Republican Campaign Committee, according to his campaign.

McCarthy credited the fundraising enthusiasm to the contrast of leadership Republicans would bring to the House. 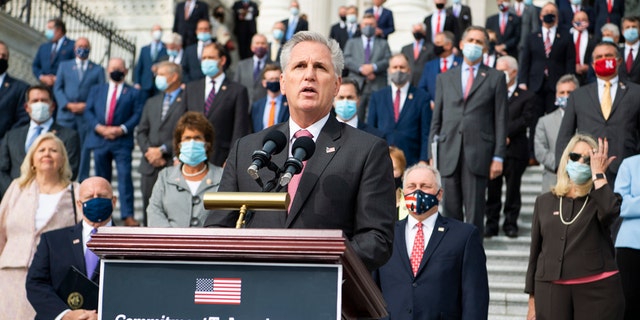 UNITED STATES – SEPTEMBER 15: House Minority Leader Kevin McCarthy, R-Calif., along with House Republicans, conduct an event on the House steps of the Capitol to announce the Commitment to America, agenda on Tuesday, September 15, 2020. The plan outlines ways to restore our way of life, rebuild the greatest economy in history, and renew the American dream. (Photo By Tom Williams/CQ-Roll Call, Inc via Getty Images)

"Republicans have been transparent about how we will govern with a majority: We will restore our way of life, rebuild the greatest economy in history and renew the American Dream," McCarthy, R-Calif., said in a statement to Fox News. "As a result, there is incredible enthusiasm for our ideas and substantial resources to reach the American people."

Last month, McCarthy unveiled a new agenda for Republicans to campaign on to flip the House. Dubbed the "Commitment to America," the blueprint talks of restoring the economy, defeating the coronavirus and backing school choice and law enforcement.

"We will continue to share our Commitment to America and contrast our optimistic, achievable vision with the Democrats' agenda to defund the police and military, destroy our economy, and dismantle our freedoms and the Constitution," McCarthy said in a statement Thursday.

Republicans wrestled back control of the House in the 2010 election amid the tea party wave and maintained power until the 2018 midterms when Democrats ushered in a blue wave, led by a large incoming class of women.

Democrats currently have a 232-197 seat majority over Republicans. There's one Libertarian, Rep. Justin Amash of Michigan, and five vacancies.