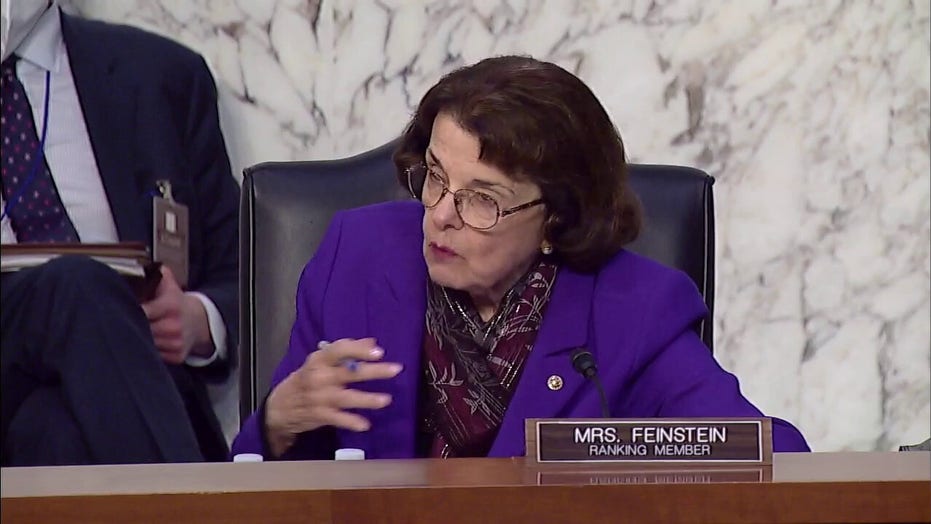 Sen. Feinstein thanks Sen. Graham for ‘one of the best set of hearings’

At the end of Amy Coney Barrett’s Supreme Court confirmation hearing, Sen. Dianne Feinstein, D-Calif., thanks Sen. Lindsey Graham, R-S.C., for ‘one of the best set of hearings.’

Senate Judiciary Committee ranking Democrat Dianne Feinstein's words and gestures of friendship towards Republican committee chairman Sen. Lindsey Graham on Thursday were viewed not as a model of proper behavior, but of weakness by a liberal group who now wants her to step aside.

"We launched this ad calling on Sen. Feinstein to fight like everything is on the line — because it is. She didn’t," the organization tweeted with a video questioning Feinstein's ability to lead her party. "We’re calling on her to step down as the leader of the Democrats on the Judiciary Committee."

The organization's executive director is Brian Fallon, former press secretary for Hillary Clinton's 2016 campaign. He too expressed dismay over having Feinstein as the top Democrat on the committee.

"Keeping Feinstein as the top Democrat on Judiciary Committee is a monument to our side's weakness on the fight for the courts," Fallon said.

In a separate statement, Fallon said that Feinstein "has undercut Democrats' position at every step of this process, from undermining calls for filibuster and court reform, straight through to thanking Republicans for the most egregious partisan power grab in the modern history of the Supreme Court."

Those reforms that Fallon and Demand Justice are pushing for include increasing the number of justices on the Supreme Court by adding justices whose philosophies they agree with, a practice known as court packing.

Republicans have slammed Democrats for supporting such a measure, with Sen. Ben Sasse, R-Neb., calling it a "partisan suicide-bombing," and Sen. Ted Cruz, R-Texas, saying it would be "an abuse of power."