As the coronavirus pandemic threatens to pull tens of millions of Americans into poverty, Senate Democrats are scrambling to find a way to shore up one of the nation’s most broken welfare systems: a program for low-income Americans with children known as Temporary Assistance For Needy Families.

Sen. Ron Wyden (D-Ore.), the top Democrat who was behind the unemployment insurance expansion, will unveil a plan Friday, shared exclusively with HuffPost, to temporarily lift eligibility restrictions, like work requirements and time limits, on TANF, as well as propose a new separate $10 billion grant program for states to give their poorest residents cash assistance, and in-kind benefits, like help with utilities and rent.

“These work requirements right now that are in TANF right now just defy common sense because people are supposed to be home and not facing the prospect of infection.” Wyden said in an interview with HuffPost. “These vulnerable low-income families and individuals need cash immediately. They need cash now so they don’t have to go, ‘Gee, are we going to sit in the dark or are we going to eat?’”

The legislation, co-sponsored by Sens. Brian Schatz (D-Hawaii), Sherrod Brown (D-Ohio) and Bob Casey (D-Pa.), would be the first major effort to target cash assistance directly toward the most vulnerable. Wyden said while he has yet to bring the program up with the Trump administration, he has discussed the program with Senate Finance Chairman Sen. Chuck Grassley (R-Iowa) and sensed some openness.

“We didn’t get laughed out of the room,” Wyden said. Grassley’s office did not respond to a request for comment.

Through the grant program, states, tribes, the District of Columbia and Puerto Rico would be eligible for a lump sum of funding that they could distribute to individuals in families at or below 200% of the federal poverty line for three purposes: direct cash payments; relief for basic family needs, like rent or utility bills; or subsidized employment that can either be done remotely, or is deemed essential and has access to personal protective equipment.

“We must get immediate relief for these individuals and families, so they don’t have to choose between paying a light bill or buying groceries,” Brown said in a statement to HuffPost. “One of the best ways we can do that is to ensure relief funds for low-income families are included in the next coronavirus relief package, and remove burdensome requirements that prevent vulnerable families from getting the help they need.”

Experts are projecting the economic fallout from the coronavirus pandemic will likely pull more individuals into poverty in the United States than the country has seen in more than 50 years. Researchers at Columbia University found that if the unemployment rate reaches 30%, the annual poverty rate in the United States could increase up to 18.9%, bringing more than 21 million Americans into poverty. The impact would disproportionately hit children and working-age adults.

As it stands, the United States’ existing safety net for those individuals, TANF, is not equipped to handle an increased caseload. TANF was originally designed in the 1990s to pull families out of poverty and into work by giving states a lump sum of money to create their own basic assistance programs. When TANF began, as part of the 1996 welfare reform push, for every 100 families in poverty, 68 received benefits. But when the economy faltered in the 2000s, so did the program. The program’s work requirements — requiring 30 hours of “work activity” a week — proved too restrictive in an economic downturn. The block grants were never adjusted for population changes or for inflation, meaning they’ve decreased in value every year since the program started. In 2018, only 22 families out of 100 in poverty were getting aid.

“There’s this notion that we let these programs wither when the economy is good even though there are so many people who are still struggling to find employment, and then there’s a major crisis and we have to start from scratch,” Elizabeth Lower-Basch, with the anti-poverty advocacy group Center for Law and Social Policy, said. “There’s a real argument for having these programs running all the time.”

But for years, states have diverted the money to other programs, shrinking how much they spend on actual cash assistance for low-income Americans. On average, states only spend 20 cents of every TANF dollar on basic assistance. And across the nation, you can find TANF funding tied to private college scholarships, “crisis pregnancy centers,” prekindergarten and Head Start programs, and even dating and marriage workshops. An audit of Mississippi’s TANF program released Monday found the state’s funds went toward sponsoring college basketball tournaments and paying former NFL star Brett Favre for speeches that never happened.

Getting that money back into the hands of low-income Americans through TANF is proving near impossible for states — and now they’re running out of money to help the growing numbers of people who need cash.

“TANF has been used to plug budget holes and that is wrong, but it is also impossible to address when the budget holes just got 10 times bigger, which is why federal aid would be hugely valuable,” said Robert Gordon, Michigan’s Department of Health and Human Services Director. Michigan, which only uses about 10% of its block grant for cash assistance, temporarily lifted work requirements for the program.

Notably, Wyden’s proposal for an emergency basic assistance grant isn’t explicitly through TANF, an acknowledgement that the program might be too broken to fix — especially during a crisis. The last time TANF saw a boost in funding was during the Great Recession, when Congress allocated $5 billion toward an emergency fund through the program. Poverty experts praised that effort in 2009 as a net positive. But it was still messy and complicated; states have varying income eligibility levels for TANF and it didn’t reach everyone it needed to. 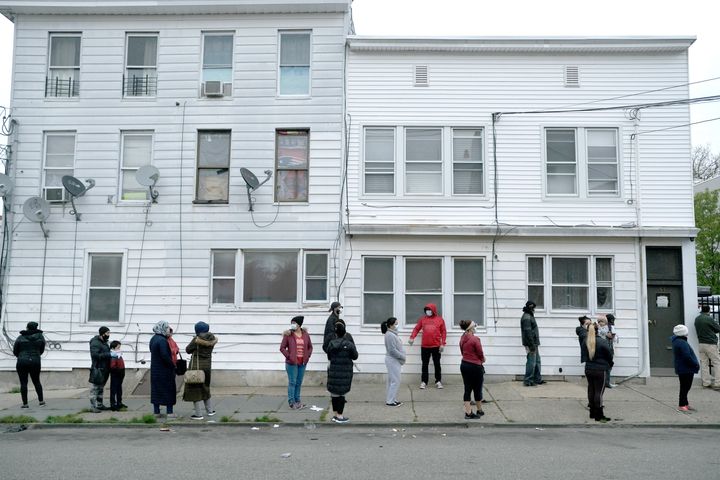 This new grant program would require states to submit a letter of intent to HHS before getting the funding, and states have to submit quarterly reports.

There’s already been some bipartisan appetite for cash assistance. Wyden’s plan costs a fraction of the $293 billion from the $2 trillion Coronavirus Aid, Relief and Economic Stability Act Congress put toward direct stimulus payments in late March. The stimulus checks weren’t targeted for the very needy, and initially proved difficult for zero-income individuals, or those without bank accounts in place, to access.

“One of the lessons we have certainly learned over the last two months is starting new programs isn’t just a matter of putting into federal law,” Lower-Basch said.

The proposal allows states to use existing resources and infrastructure to put the grant program into place. So a state could use their existing TANF network to get aid out to people if they so choose, but they wouldn’t be restricted by TANF’s rules.

House Democrats are also looking to prioritize increasing funding for the Supplemental Nutrition Assistance Program, more commonly known as food stamps, as well as find ways to improve access to broadband internet and pay utilities. Democrats attempted to lift work requirements on the program in an earlier relief bill, but the provision was stripped during negotiations with the White House.

“There’s a lot of evidence that this type of response would make a great deal of difference for some of our most vulnerable families,” Luke Schaefer, a poverty and social welfare expert at University of Michigan, said. “Food continues to be a primary unmet need … But also utilities. There’s a lot of suspension so rerages are building up. Rent is a big one … Things like toilet paper, basic necessities, paper towels, cleaning sprays.”

“Money can help with all of those,” he said.